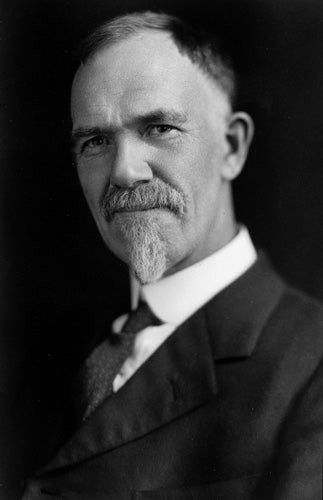 Charles Benedict Davenport was born on 1 June 1866 at Davenport Ridge, the family’s summer home near Stamford, Connecticut. He was the eighth child of Amzi Benedict Davenport (1817–1894), who had trained as a school teacher and who had founded an academy. At the time of Charles’s birth his father operated a successful real estate office in Brooklyn. Jane Joralemon Dimon Davenport (1826–1895), his mother, was the daughter of John Dimon, a carpenter and builder. She was her husband’s second wife. During the winter the family lived in Brooklyn Heights. Davenport was home-schooled and worked at his father’s office until 26 November 1879, when he enrolled in Brooklyn Collegiate and Polytechnic Institute at the age of thirteen.

He graduated with a B.S. in civil engineering in 1886. For nine months during 1886–1887 he worked as a surveyor for the Duluth, South Shore and Atlantic Railroad in Michigan. He left the job in September 1887, and entered Harvard as a junior that same month.

He excelled at Harvard. In his first year he completed seven courses earning an A in each. Zoologist E. L. Mark was a major influence on Davenport. Davenport completed his undergraduate degree in 1889, and he worked that year at the biological station at Woods Hole, Massachusetts. He continued at Harvard toward the Ph.D., winning the Thayer Scholarship in 1890 and 1891. He received his doctorate in 1892; his dissertation was on Bryozoa.

Davenport was an instructor at Harvard from 1891 until 1899, variously teaching introductory and intermediate zoology. He first taught Experimental Morphology in 1893, a course of his own design. He continued to develop this course at Harvard, often publishing work with his students as coauthors to include W.E. Castel, H.V. Neal, W.B. Cannon. H. Perkins, and C. Bullard. Davenport also taught in Harvard’s Annex, and there he met Gertrude Crotty, the daughter of William and Millia Crotty of Burlington, Kansas. She had received her M.A. from the University of Kansas, and was an instructor at the annex. Both attended Alexander Agassiz’s marine biological laboratory in Newport, Rhode Island, in the summer of 1893. They married in June 1894. The couple’s daughter, Millia Crotty Davenport, was born in Cambridge, Massachusetts, on 30 March 1895.

The first part of Davenport’s first book, Experimental Morphology, was published in 1897. Both it and his Statistical Methods with Special Reference to Biological Variation (1899) were of great importance in introducing to the sciences the quantitative methods advocated by Francis Galton and Karl Pearson.

Charles B. Davenport was one of the first scientists in the United States to write about the rediscovery of Gregor Mendel’s laws of inheritance. In November 1900 for the Biological Bulletin he wrote a review of the publications of Carl Correns and Hugo de Vries on Mendel, which was published in its June 1901 issue.

The Carnegie Institution of Washington was founded in 1902. Nearly simultaneous with its founding, Davenport began a campaign for it to invest funds to create a study center for genetics at Cold Spring Harbor. That year he and his wife traveled to Europe, and there met Galton and Pearson. In 1904 the Carnegie Institution established the Station for Experimental Evolution at Cold Spring Harbor, making him its director, and he resigned from the University of Chicago. W. R. T. Jones, John S. Billings, Franklin W. Hooper, and Hugo De Vries spoke at the opening of the station on 11 June 1904.

The Carnegie laboratory building opened on 1 January 1905. In 1906 the name of the Station for Experimental Evolution was changed to the Department of Experimental Evolution. Davenport was president of the American Society of Zoologists in 1907 and 1929. In 1910 he founded the Eugenics Record Office at Cold Spring Harbor, and he appointed Harry H. Laughlin to direct it. Charles Benedict Davenport, Jr. was born on 8 January 1911; he died of polomyelitis on 5 September 1916.

During World War I Davenport was a major assigned to the office of the Surgeon General. In 1918 and 1919 he and Albert G. Love compiled anthropometric data on draft recruits. The Department of Experimental Evolution and the Eugenics Record Office were consolidated by the Carnegie Institution as the Department of Genetics in December 1920, with Davenport continuing as over all administrator of offices. He received the gold medal of the National Institute of Social Sciences in 1923.

The Biological Laboratory separated from the Brooklyn Institute in 1924, becoming an independent entity, the Long Island Biological Association. Reginald G. Harris, Davenport’s son-in-law, was appointed the director of L.I.B.A. Davenport traveled to Mexico in March 1932 and there met with anthropologist Hermann Beyer. Davenport retired as director of the Department of Genetics in 1934. After his retirement he remained active in the affairs of the laboratory and the community. He was the first director of the Cold Spring Harbor Whaling Museum, and in laboring to prepare an exhibit for that institution was stricken by the pneumonia that killed him. At his death he was the president of the American Association of Physical Anthropologists. Gertrude Crotty Davenport died in 1946. Both are buried in the Memorial Cemetery of St. John’s Church.