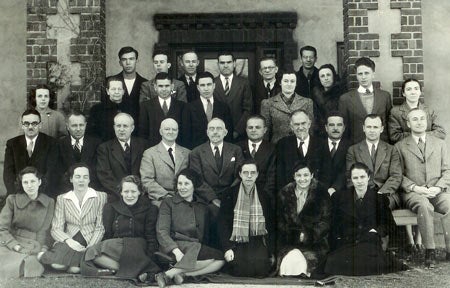 In 1903 the Carnegie Institution of Washington (CIW), the privately-funded scientific research organization founded by Andrew Carnegie in 1902, approved a plan to establish a biological experiment station to study evolution. The Station for Experimental Evolution (SEE) formally opened on June 11, 1904 in Cold Spring Harbor, New York, to study heredity and evolution through breeding experiments with plants and animals. Under the initial directorship of Charles Benedict Davenport (1866–1944), the unit would flourish and operate for 67 years, undergo name changes as it fine-tuned its research focus, combine with and then close down a eugenics research operation, and eventually merge with neighboring Long Island Biological Association’s Biological Laboratory (LIBA Bio Lab). This union eventually became Cold Spring Harbor Laboratory, a research and educational institution which played a pivotal role during the 20th century in the emergence of molecular genetics, the scientific foundation of the revolution in biology and biotechnology.

In 1902, and again in 1903, Charles Benedict Davenport (1866–1944), approached CIW with a proposal to establish a biological station at Cold Spring Harbor. The trustees of CIW approved his plan, and he became the first director (1904–1934) of the Department of Genetics (originally named the Station for Experimental Evolution (SEE)). During this same time period, Davenport was also the director of the Brooklyn Institute of Arts and Sciences’ Biological Laboratory (BIAS Bio Lab), a summer field station for high school and college science teachers that he had led since 1898. The Department of Genetics and the BIAS Bio Lab were neighbors, operating on adjacent acres of land donated to each of them by The Wawapex Society, a philanthropic foundation established by the John D. Jones family of Long Island, New York. In 1910, while Davenport was directing both those operations, Mrs. E. H. Harriman established the Eugenics Record Office (ERO) at Cold Spring Harbor for him to head as well. In 1918 the ERO was donated to CIW, and became part of the Department of Genetics in 1921. Davenport concurrently headed BIAS Bio Lab, CIW’s Department of Experimental Evolution (changed from SEE in 1918), and the ERO until 1924. That year ownership and management of BIAS Bio Lab was transferred to a newly formed Long Island Biological Association (LIBA). See Related Collections for histories of BIAS Bio Lab, LIBA Bio Lab, and ERO.

There were five directors of the Carnegie Institution of Washington Department of Genetics:

In 1962 CIW and LIBA’s Bio Lab agreed to merge to form Cold Spring Harbor Laboratory of Quantitative Biology. By 1970 the name was shortened to Cold Spring Harbor Laboratory. A reduced number of CIW scientific investigators, including Nobel Laureates Alfred D. Hershey and Barbara McClintock, would remain with a skeletal staff and operate as the Genetics Research Unit until it closed in 1971. 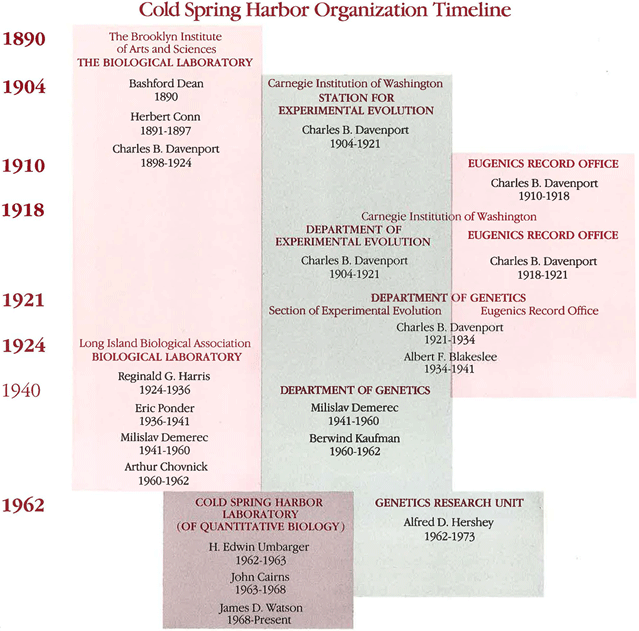 *In 1962 Caryl Haskins, then president of CIW closed down the Dept. of Genetics and hand over its physical resources to the Bio Lab provided it could become a financially viable organization. If this could be accomplished the CIW would continue to support Barbara McClintock and Alfred Hershey at Cold Spring Harbor.

11 Newcomb, Simon. A Statistical Inquiry into the Probability of Causes of the Production of Sex in Human Offspring

12 Noguchi, Hideyo. The Action of Snake Venom upon Cold-Blooded Animals

16 Jennings, Herbert S. Contributions to the Study of the Behavior of Lower Organisms.

20 Duerden, J.E. The Coral Siderastrea radians and Its Postlarval Development.

23 Castle, W.E. Heredity of Coat Characters in Guinea-Pigs and Rabbits.

29 Baird, John Wallace. The Color Sensitivity of the Peripheral Retina.

30 Shull, George Harrison. Stages in the Development of Sium cicutaefolium.

36 Stevens, N.M. Studies in Spermatogenesis. Part I. and Part II.

37 Harper, R.A. Sexual Reproduction and the Organization of the Nucleus in Certain Mildews. (2 copies)

42 Atwater, W.O. & F.G. Benedict. A Respiration Calorimeter, with Appliances for the Direct Determination of Oxygen

48 Tower, William Lawrence. An Investigation of Evolution in Chrysomelid Beetles of the Genue Leptinotarsa.

49 Papers of the Station for Experimental Evolution, Nos. 5,6.

50 Livingston, Burton Edward. The Relation of Desert Plants to Soil Moisture and to Evaporation. (2 copies)

51 Stevens, N.M. Studies on the Germ Cells of Aphids.

58 Pearl, Raymond, with the assistance of Olive M. Pepper and Florence J. Hagle. Variation and Differentiation in Ceratophyllum. (2 copies)

64 Pearl, Raymond, and A.B. Clawson. Variation and Correlation in the Crayfish, with Special Reference to the Influence of Differentiation and Homology of Parts.

70 MacCurdy, Hansford and W.E. Castle. Selection and Cross-Breeding in Relation to the Inheritance of Coat-Pigments and Coat-Patterns in Rats and Guinea-Pigs.

77 Benedict, Francis Gano. The Influence of Inanition on Metabolism.

84 Osborne, Thomas B. The Proteins of the Wheat Kernel.

94 Conrad, Henry Shoemaker. The Structure and Life-History of the Hay-Scented Fern

95 Davenport, Charles B. Inheritance in Canaries.

98 Studies at the Desert Laboratory.

101 Lutz, Frank E. The Variation and Correlations of Certain Taxonomic Characters of Gryllus.

102 Papers from the Tortugas Laboratory of the Carnegie Institution of Washington. Vol. I.

103 Papers from the Tortugas Laboratory of the Carnegie Institution of Washington. Vol. II.

116 Reichert, Edward Tyson, and Amos Peaslee Brown. The Differentiation and Specificity of Corresponding Proteins and Other Vital Substances in Relation to Biological Classification and Organic Evolution: The Crystallography of Hemoglobins. (2 copies)

117 Cannon, William Austin. Studies in Heredity As Illustrated by the Trichomes of Species and Hybrids of Juglans, Oenothera, Papaver, and Solanum.

122 Johnson, Roswell H. Determinate Evolution in the Color-Pattern of the Lady-Beetles.