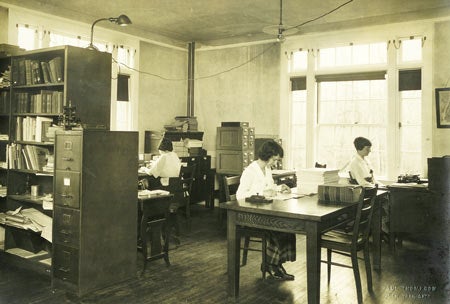 This collection was generated by the Eugenics Record Office (ERO) which was created as a department of the Carnegie Institution of Washington Station (CIW) for Experimental Evolution at Cold Spring Harbor, New York. The Carnegie Institution of Washington engaged in research in biology from 1904 using a tract of about 9 acres leased for 50 years from the Wawepex Society in Cold Spring Harbor, NY. With Charles Davenport as the Director, a laboratory was built and the “station” opened in June 1904; it was named “Station for Experimental Evolution” (SEE) in 1906. In 1910, with funding from Mrs. E. H. Harriman, an 80-acre farm near the SEE was purchased, and an office building was erected to establish the Eugenics Record Office (ERO). In 1918, Mrs. Harriman transferred the farm and building to CIW along with an endowment for its maintenance. In 1921 the SEE and ERO were combined into the CIW Department of Genetics with Charles Davenport as the Director. After Charles Davenport retired in 1934, Dr. Albert Blakeslee served as Director of the CIW Department of Genetics until 1941 when Milislav Demerec was named Director. The ERO closed in December 1939 and materials including the collection of forms containing hereditary and genealogical information records were put into storage. At this point the name of the ERO was changed to Genetics Record Office. In 1948 the records from the Eugenics Record Office were donated to the University of Minnesota for use by the Dight Institute of Human Genetics. That material was ultimately dispersed amongst three institutions: the American Philosophical Society, Jackson Laboratories and The Genealogical Society of Utah.

The ERO was devoted to the collection and analysis of American family genetic and traits history records. These eugenics studies collected information such as inborn physical, mental and temperamental properties to enable the family to trace the segregation and recombination of inborn or heritable qualities. The family study files include individual analysis cards, field worker reports, pedigree charts, and special trait studies. Davenport was president of the American Society of Zoologists and in 1910 he founded the Eugenics Record Office at Cold Spring Harbor, and appointed Harry H. Laughlin to direct it. H. H. Laughlin became a spokesman for the programmatic side of the previous eugenics movement, lobbying for eugenic legislation to restrict immigration and sterilize “defectives,” educating the public on eugenic health, and disseminating eugenic ideas widely. The Record Office formally came under the aegis of the Carnegie Institution of Washington in 1918.

This is a brief overview of the ERO written by Dr. Jan Witkowski, Director of the Banbury Center at Cold Spring Harbor Laboratory.

“A new development came in 1907 when Davenport became interested in human genetics. His first studies dealt with physical traits like hair, eye and skin color that were clearly related to similar studies going on in mice and other experimental animals. His interests changed rather quickly to the genetics of human traits that were not so easily quantifiable, for example, intelligence and attributes such as musical skill. This was in part are response to the similar studies going on elsewhere, notably in England, and in part because of the potential social relevance of such studies in a time where there was increasing concern about immigration from Europe into the United States.

Davenport persuaded a local resident to provide funds for the creation of the Eugenics Record Office (ERO) that would put the study of human traits on a firm, quantitative basis. He developed questionnaires that were taken from door-to-door by trained workers who recorded the characteristics of individuals in the families interviewed. These were stored on index cards that by 1924 numbered 750,000. These were analyzed according to the principles of Mendelian genetics but with little or no regard for the quality of the data or whether Mendelian genetic analysis was appropriate for such traits. Nevertheless, Davenport’s work as a eugenicist was very influential, and as a consequence, the ERO became the center for scientific studies of eugenics. By the early 1920’s, the influence of the ERO reached beyond academia when Davenport’s colleague, Harry Laughlin, began testifying before Congress on matters relating to immigration and sterilization. By the late 1920’s, however, eugenics was beginning to fade under the attack of bona fide geneticists such as T. H. Morgan and H. J. Muller.”

The collection is an invaluable resource for studies of eugenics in the United States in the early part of this century. As might be expected, the collection of eugenics texts is especially comprehensive, including books from Europe. It includes popular treatments of eugenics; monographs; and reports of international congresses. There is a set of the Eugenics Record Office Bulletins together with other publications of the ERO.

For specific information on the availability of materials or to arrange an appointment to use the Archives, please contact 516-367-8491 or archives@cshl.edu. Please consult our Permissions & Copyright Policies for any materials you wish to use.