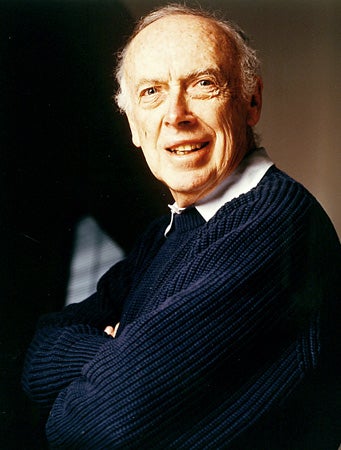 James Watson was born in Chicago, Illinois in 1928. He received a B.S. in 1947 from the University of Chicago and a Ph.D. in 1950 from Indiana University, both in zoology. Following a National Research Fellowship in Copenhagen, he conducted research on a National Foundation of Infantile Paralysis Fellowship at the University of Cambridge, England, where he discovered the structure of deoxyribonucleic acid (DNA) with Francis Crick. Watson and Crick proposed that the DNA molecule takes the shape of a double helix, an elegantly simple structure that resembles a gently twisted ladder. This research emphasized a concept central to the emerging field of molecular biology: understanding the structure of a molecule can give clues about how it functions. Watson, Crick, and Maurice Wilkins at King’s College in London, who confirmed the DNA structure using X-ray crystallography, shared the 1962 Nobel Prize in Physiology and Medicine for their discovery.

After his tenure at Cambridge, Watson spent two years at the California Institute of Technology. He joined the Harvard faculty in 1955 and became Professor in 1961. In 1968, while employed at Harvard, he became director of Cold Spring Harbor Laboratory. Watson resigned from Harvard in 1976 to become full-time director of CSHL. Under his direction, the renowned but financially endangered institution was revitalized. Watson steered the laboratory into the field of tumor virology, from which emerged our present understanding of oncogenes (cancer genes) and the molecular basis of cancer. From 1994-2003 he was President of CSHL, and Chancellor from 2003-2007. He retired in 2007 and served as Chancellor Emeritus of CSHL from 2007-2018.

James D. Watson has received many honors, including the John Collins Warren Prize of Massachusetts General Hospital (1959), the Eli Lilly Award in Biochemistry (1960), the Albert Lasker Prize, awarded by the American Public Health Association (1960), the Nobel Prize in Physiology or Medicine (1962), the John J. Carty Gold Medal of the National Academy of Sciences (1971), the Presidential Medal of Freedom (1977), the Copley Medal of the British Royal Society (1993), the Charles A. Dana Distinguished Achievement Award in Health (1994), Lomonosov Medal, Russian Academy of Sciences (1995), the National Medal of Science awarded by the National Science Foundation (1997), the University of Chicago Medal (1998), the New York Academy of Medicine Award (1999), the University College London Prize (2000), the Liberty Medal Award from the City of Philadelphia (2000), the Benjamin Franklin Medal for Distinguished Achievement in the Sciences (2001), an Honorary Knighthood of the British Empire (2002), the Gairdner Foundation Award of Merit (2002), the Lotos Medal of Merit (2004), the Othmer Medal (2005), the Karl Landsteiner Memorial Award (2006), the Gregor Mendel Medal (2008), the Gold Medal of Lublin Medical University (2008), the Gold Medal of Jagiellonian University (2008), the Japan Society for the Promotion of Science Award (2008), the Capo d’Orlando Prize (2009), and the Prizvanie (Vocation) Award (2010).

He is married to the former Elizabeth Lewis, with whom he has two sons, Rufus and Duncan.

The Photographs record group (JDW/1) was created artificially by the archivists to separately house various photographs, negatives, slides, and transparencies found throughout the collection. It also includes digital images, some born digital and others collected from electronic media such as CD-ROMs.

The Personal Papers record group (JDW/2) comprises the bulk of the collection. The record group includes correspondence, manuscripts, laboratory notebooks, clippings, reprints, speeches and lecture notes, memorabilia, financial records, and audiovisual media created and collected by Watson throughout his life. His career as a scientist, educator, administrator, writer, and public advocate for scientific research are well documented in the papers. Files related to Watson’s role in the Human Genome Project are also collected here.

The Institutional Records record group (JDW/3) is composed of material related to Watson’s role as an administrator at Cold Spring Harbor Laboratory. Watson became director of CSHL in 1968; he also served on the Board of the Trustees from 1965-1968, and these records are also included in the collection. As director, Watson presided over an unprecedented revival of the Laboratory, focusing on securing funds from both private and public sources and expanding the Lab’s meetings and courses offerings. Material in this record group includes files related to fundraising, scientific personnel, the expansion and renovation of the Lab’s properties, the Long Island Biological Association, as well the Lab’s famous meetings, courses, and Symposia.

Due to the nature of Watson’s filing systems (all mail, personal and professional, goes through his office at Cold Spring Harbor Laboratory), some CSHL institutional material can be found in the Personal Papers.

The papers have been processed with the support of Lehrman Institute, the Josiah Macy Jr. Foundation, and Norton Zinder’s family. As of 2019 the collection is still accruing material.