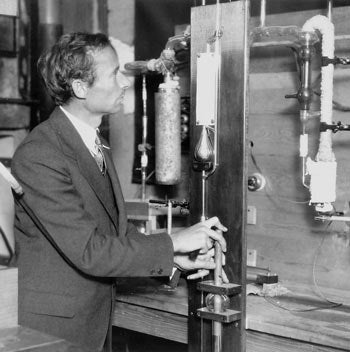 Hugo Fricke was born August 15, 1892 in Aarhus, Denmark. His parents were Capt. G.C. Fricke and Hedvig Kampfner. He graduated from Cathedral School, Aarhus, Denkar in 1910 and later received his Ph.D. in Physics at the University of Copenhagen, Denmark.

In his time at the University of Copenhagen, he assisted Niels Bohr with his recently conceived atomic theory. In 1918 he moved to the University of Lund where he worked with Manne Siegbahn on x-ray spectroscopy. In 1919, Fricke moved to the United States in 1919, where he was an American Scandinavian Fellow at Columbia University, which was followed with a period of time at Harvard University until 1921. At Harvard, he collaborated with Theodore Lyman, who was the discoverer of 585 A helium resonance line. He also became interested in the application of physics to biological and medical problems. In 1921, George Crile invited Hugo Fricke to organize and be head of a biophysical laboratory at the Cleveland Clinic Foundation, Cleveland Ohio where he continued his research until 1928.

Charles Davenport recruited Fricke in 1928 as the first Full-time investigator at The Biological Laboratory where he did science until 1955. He was the director of the Walter B. James Laboratory for biophysics until the late 1930’s when due to lack of support for these fundamental studies, research in radiation chemistry at W.B. James Laboratory was terminated.

During his career at the Biological Laboratory Fricke began his studies on the radiation chemistry of dilute aqueous systems. He also devised new x-ray irradiation sources and standardized techniques of chemical dosimetry, purification of water and micro gas analysis. studied stability of irradiated water. He also studied the radiation-induced chain decomposition of hydrogen peroxide; the role of 02 and pH in radiation chemistry.

Hugo Fricke left The Biological Laboratory in 1955 to work at the Argonne National Laboratory; Chemistry Division in Lemont, Illinois where he was a research associate and consultant. In 1966 Fricke was a consultant to the Danish Atomic Energy commission Laboratory in Riso, Denmark.

The Hugo Fricke papers span the years 1920 to 1972. The bulk of the material falls into the period of 1955-1972, corresponding to Fricke’s years of research at the Argonne National Laboratory and collaboration with the Danish Atomic Energy Commission Research Establishment at Riso.

The types and dates of material in the collection include reprints of Fricke’s publications, manuscripts by authors other than Fricke, scientific notes and drafts (ca. 1955-1969), graphs and data (ca. 1956-1972), scientific correspondence, scientific notebooks (1952-1967), 3×5″ card annotated references (references date from 1920-1970) and lantern slides which depict experimental results in graphical form (undated).

The predominant subject areas relate to the radiation chemistry of aqueous solutions, the fragmentation of irradiated proteins, and the dependence of radiolysis yields on pH and diffusion kinetics.

Hugo Fricke’s correspondence during the years 1956 to 1972 consists predominantly of handwritten copies or rough drafts of letters to coworkers. It appears that Fricke meticulously designed experiments and sent instructions to his associates. Their replies consist of detailed reports of experimental results or calculations.

A significant gap with no material of any type occurs in the years 1939 to 1952. In the 1939 Annual Report of The Biological Laboratory, Cold Spring Harbor, Fricke is listed on the staff as “Biophysicist,” and the Report of the Treasurer shows that salaries and expenses in Biophysics totaled $6,260.73). In the 1940 Annual Report, Fricke is listed on the Scientific Advisory Committee of The Biological Laboratory however, he is not listed under “Investigators and Assistants” and there is no provision for Biophysics in the “Report of the Treasurer.” There is no subsequent mention of Fricke in the Annual Reports from 1940 through 1953. The 1954-1955 Annual Report lists Hugo Fricke as an “Associate” but there is no mention made of his research. It should be noted that during World War II, the Walter B. James Biophysical Laboratory was made available to the Columbia University Division of War Research for use in experimental work.

The papers of Hugo Fricke were given to the Cold Spring Harbor Laboratory Library and Archives in 1976 by his wife, Dorothy Newman Fricke. The papers were accessioned and processed in September 2011 (Accession # 2011_HF). Hugo Fricke created these papers while a full-time employee at The Long Island Biological Laboratory.