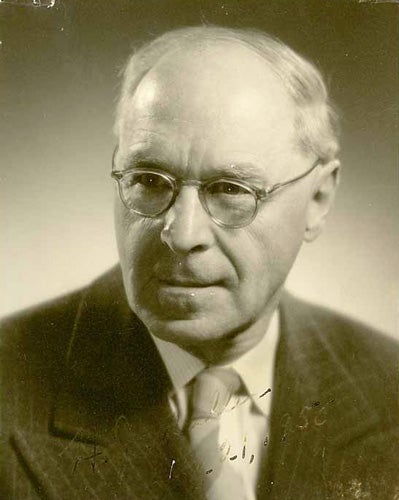 Hermann Joseph Muller (December 21, 1890–April 5, 1967) was born in New York City. He received a B.A. in 1910 and a Ph.D. in 1915, both from Columbia University, where he was a student of T.H. Morgan in his Drosophila laboratory. After teaching at Rice University and the University of Texas, Muller left the United States in 1932 to work in Berlin and then the USSR. In 1937, he left the Soviet Union and made his way Edinburgh where he married his second wife, Dorothea Kantorowicz. During World War II, Muller and his wife were able to find passage back to the United States and Muller accepted a temporary research position at Amherst College. In 1945, Muller took a position at Indiana University where he conducted his most famous research regarding mutational effects of radiation in Drosophila melanogaster. For this research, he received the Nobel Prize in 1946. Muller took an active role in social-scientific issues writing and lecturing on the effects of radiation in humans, atomic fallout, eugenics, and teaching evolution in schools.

The Hermann Muller Collection spans his entire life plus a number of years following his death in which many scientists and historians wrote about his life and work. Series include correspondence, biographical material and memorabilia, research and publications, and photographs. His correspondence is mainly professional and the bulk of it is with his friend and colleague, Edgar Altenburg, and with Elof Carlson. The biographical material primarily consists of autobiographies, items taken from Muller’s office at Indiana University upon his death, and obituary articles. The research and publications consist of lectures, photocopies of articles, scientific notes, reprints, audiotape of lectures, and manuscripts of articles (some eventually published, some unpublished). Of particular interest is a letter H.J. Muller wrote to Stalin in 1936 which precipitated his exit from the USSR. Also of note is a large manuscript Muller had been working on for Erwin Baur about the history of Drosophila studies. The manuscript was left incomplete upon the death of Erwin Baur. The photographs in this collection are primarily those used by Elof Carlson for his biography of Muller but also include unlabelled family photographs of unknown origin.