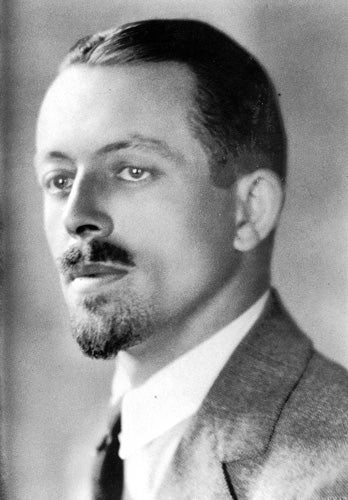 Reginald Gordon Harris was born in Medford, Massachusetts, on July 18, 1898, the son of Rev. Benjamin Robinson Harris, a Baptist minister, and Agnes Adella Wilder Harris. He grew up in Lowell, Massachusetts, and spent summers in Bradford New Hampshire. He entered Brown University in 1915, and first studied at Cold Spring Harbor in the summer of 1916.

He was a member of the R.O.T.C. at Brown. During World War I he trained in Plattsburg, New York; afterward he was commissioned a lieutenant.

The war over, he returned to Brown, where he worked towards a graduate degree in biology while completing his undergraduate degree. He received the Ph.B. and M.A. in 1918. He spent the summer of 1918 and the summer of 1919 at Cold Spring Harbor as an assistant. In 1919 and 1920 he accompanied J. Chester Bradley on the Cornell Entomological Expedition to South America. He was supported in this by a donation from a wealthy supporter of the Biological Laboratory.

He attended the University of Paris on an American Field Service Fellowship from 1921 to 1923, and while in France he studied at the Station Zoologique de Wimereux.

Harris married Jane Joralemon Davenport at Cold Spring Harbor in 1922.The couple traveled to Northern Africa in 1923, where he engaged in eugenics research. In August of that year he was appointed Acting Director of the Biological Laboratory, which from its inception had been operated as a department of the Brooklyn Institute of Arts and Sciences, since 1898 under the direction of Harris’s father-in-law Charles B. Davenport. In February of 1924 the Biological Laboratory was transferred to the Long Island Biological Association, and Harris was elected to the director’s position.

He moved quickly to transform the institution into a major research center. In the first annual report of the Biological Laboratory he noted that “it is noteworthy that the office of laboratory director is no longer a seasonal operation. The laboratory director is in residence at the Laboratory throughout the year, occupied with executive duties and research. This change in the nature of the office is a step toward the realization of the policy to make the Laboratory of use to biologists throughout the year.” He received his Ph. D. from Brown in 1924. In 1924 Richard O. Marsh, an engineer who had traveled to Panama, brought with him to New York City a group of Kuna Indians, a tribe whose desire for autonomy from the Panamanian government he espoused. To the media Marsh suggested that lighter-skinned Kuna, who were part of a significant minority within the tribe, might be the descendants of Vikings. A scientific investigation was proposed. The Department of Genetics of the Carnegie Institution of Washington was based in Cold Spring Harbor, and its director was Davenport. He and other geneticists commissioned Harris to travel to Panama to investigate the causes of light skin among the Kuna, and this he did in 1924 and 1925 in what has been termed the Second Marsh-Darien Expedition. His wife accompanied him as the expedition artist. The expedition coincided with the efforts of the Kuna to obtain autonomy from the government of Panama, and it is discussed in James Howe’s A People Who Would Not Yield (1998), which includes photographs from it.

Harris was an active and successful interpreter of the work of the Biological Laboratory to its wealthy neighbors, and he brought in much funding from them for a year-round program of increasing importance to science. A portion of the land of the laboratory was leased to it by the Wawepex Society, and in 1925 he urged the board to purchase land adjacent to this land that had come on the market. He established a Scientific Advisory Committee in 1926 to examine critically the work of the Laboratory and to guide its activities as a research center. The laboratory gained administrative and laboratory space with the Nichols Building (1928), which he had championed. To explore how the work of the laboratory might be more far-reaching Harris formed a Special Advisory Committee on General Physiology and Biophysics. This committee recommended that Hugo Fricke be appointed Resident Investigator in Biophysics. After Harris obtained funding, the James Laboratory was built for Fricke’s research in 1929.

From January until March 1927 Harris was in residence at the University of Rochester School of Medicine and Dentistry, where he worked with reproductive biologist George W. Corner.

Harris worked diligently in the fall of 1935 to edit the minutes of the symposium. His last official act that year was attending the meeting of the Scientific Advisory Committee in Princeton on December 30. He died in early January 1936 of pneumonia.

The collection includes documents, college essays, research notebooks, scrapbooks, and photographs. Most of Harris’s personal correspondence is to and from his family, with his brother, Rev. Malcolm Harris, being a major correspondent. Other personal correspondence is with scientists to include Bradley, and geneticists William E. Castle, Corner, Thomas Hunt Morgan, and H. M. Parshley. There are two years (1924-1925) of Harris’s correspondence for the Life Extension Institute, an agency founded to counsel prospective marriage partners on their genetic suitability for marriage.

The collection contains both most of Harris’s published writings in manuscript and as printed and research that was not published. The large number of negatives and loose photographs from the Cornell Entomological Expedition to South America have been identified in this finding aid by markings on the envelopes in which they were held by Harris (numbered A1-D22). An inventory has been created of the Panama photographs based on Harris’s descriptions and Howe’s captions.

The material from the Second Marsh-Darien Expedition in this collection is extensive. Among other things it includes hair clippings, glass lantern slides, a sheet of picture writing, a research notebook, and many photographs. The photographs, negatives, and lantern slides that are captioned are those that were seen and described by anthropologist James Howe. Howe’s captions have been retained because of his knowledge of the Kuna and their history. There is no evidence in Howe’s inventory (that accompanied his letter-of-gift) that he saw the Glenn Gift material that relates to this expedition before his donation.