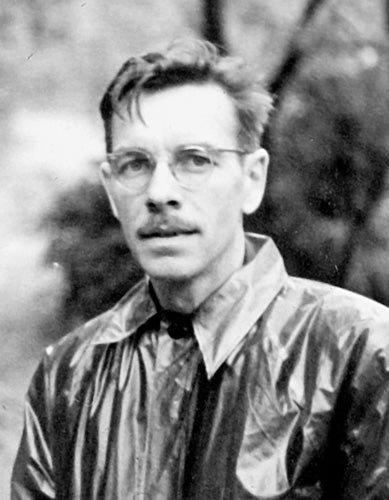 Alfred Day Hershey was born December 4, 1908 in Owosso, Michigan. He received his degrees at Michigan State (B.S., 1930; Ph.D., 1934) and served on the faculty in the Department of Bacteriology at Washington University’s School of Medicine in St. Louis from 1934-1950. He then joined the staff of the Genetics Research Unit, Carnegie Institution of Washington at Cold Spring Harbor, where he served as Director from 1962 until his retirement in 1974.

Dr. Hershey published more than 100 articles in scientific journals and books and was the principal editor of the important reference book Bacteriophages (by Mark H. Adams, completed after the author’s death) and the highly regarded book The Bacteriophage Lambda, published by Cold Spring Harbor Laboratory. Alfred Hershey’s early research at Washington University was on the growth requirements and metabolism of enteric bacteria and, in a series of studies in collaboration with J. Bronfenbrenner, on the infectivity of bacterial viruses bacteriophages and the immunological interactions of antibodies with bacteriophages. From these interests, Hershey went to play a key role in the development of phages as productive systems for the exploration of the molecular basis of biology.

Soon after moving from St. Louis to Cold Spring Harbor and setting up his laboratory in the Animal House (now called the McClintock Laboratory) Hershey and Martha Chase began a study of the contributions of the nucleic acid and protein components of phage particles to phage heredity. They labeled the proteins with radioactive sulfur and the deoxyribonucleic acid (DNA) with radioactive phosphorus. These double-labeled phages were allowed to adsorb to and infect Escherichia coli. A short time later, the culture was vigorously mixed with a high-speed blender. The phage proteins were sheared from the bacterial cell sources, but the DNA remained associated with the bacteria and was able to program the complete development of progeny phages. Hershey and Chase concluded that the role of the proteins was to encapsidate and protect the DNA, to attach to sensitive bacteria and to act rather like a syringe that injects the DNA into the host. The DNA, on the other hand, was the material basis for heredity, encoding each genetic characteristic as well as the program for the growth and development of progeny. This work was central to the award of the Nobel Prize in 1969 to Dr. Hershey.

Hershey’s laboratory extended these studies to demonstrate that viral growth occurs in two stages: the replication of the nucleic acid and the synthesis of capsid proteins and their assembly in mature progeny phage particles. He studied spontaneous mutations and those induced by the decay of radioactive phosphorus in DNA. And, with Elizabeth Burgi and Laura Ingraham, Hershey examined the biophysical properties of DNA, showing that the molecular of heredity was an extremely long polymer but of discrete and homogeneous size for a given phage. His lab developed the means to measure the molecular weights of long DNA molecules, to break them in controlled ways, and to fractionate the pieces. And he discovered the cohesive ends that allow lambda phage to circularize, molecules that have come to be known as Hershey circle.

The collection includes awards, clippings, correspondence, honorary diplomas, photographs, publications, reports, research notes, and scrapbooks. Hersheys professional correspondence is chiefly administrative in nature, addressing his transition from the Department of Bacteriology at Washington University’s School of Medicine in St. Louis, MO to the Carnegie Institute of Washington in Cold Spring Harbor, NY and his salary, expense, and equipment requests while employed there as a researcher and director. Additionally, contained within Hershey’s professional correspondence are several notes from colleagues (as well as a telegram from President Richard Nixon) congratulating Dr. Hershey on having been awarded the 1969 Nobel Prize in the category of Physiology or Medicine. These correspondences have not been broken up into sent and received series, as many of the letters are carbon copies.

The bulk of Hershey’s personal papers consist of correspondence to and from Harriet Jill Davidson from July 1945 until their marriage in November of the same year. Also included are five scrapbooks containing clippings, photographs, and other ephemera documenting Dr. Hershey’s scientific achievements as well as his family’s travels to Stockholm, Sweden, where they accompanied him at the Nobel Prize Ceremony in December 1969.