The following is another post in our series highlighting the collections that are being processed through the NHPRC Basic Processing Grant.

The Office of Technology Transfer Collection documents CSHL’s first inroads into the world of Biotechnology. Research that was initially carried out in academic laboratories led to the development of recombinant DNA techniques. This, in turn, stimulated entrepreneurial scientists to create biotechnology companies. Recombinant DNA is the technology that allows us to insert genes from one organism into another to make it produce a protein product, copy the gene multiple times, or give it a new trait. The discovery of recombinant DNA was considered the “birth” of modern biotechnology.

CSHL has always been at the forefront of scientific research and discoveries. Thus, it was a natural progression that the Lab should move into biotechnology. Here we will show a brief overview of three early forays.

1. Cellbiology Corporation, a biotechnology company established in 1980, was a wholly-owned for-profit subsidiary of Cold Spring Harbor Laboratory. It was originally conceived as the commercial arm of the Lab and as an entity that would initiate CSHL into the biotech world and harness the developments in gene splicing and recombinant DNA techniques. Cellbiology was used for a few projects in the early-to-mid 1980s, but it never developed into a long-term concern. The most significant work occurred in 1982: Cellbiology Corporation signed a contract with Baxter Travenol, “covering the development of Tissue Plasminogen Activator (tPA) as a potentially useful pharmaceutical product to dissolve blood clots.” Together, the two companies contracted to work with the Genetics Institute in Boston on the Activator. In July 1984, Baxter Travenol sold its interests in tPA technology to Burroughs Wellcome. Cellbiology Corporation was kept mostly dormant from the mid-1980s on, and it was dissolved in 1995. 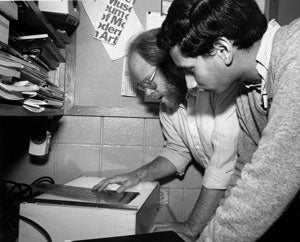 2. Ed Harlow: In 1988, while working at CSHL, Ed Harlow and his colleagues established “a crucial functional link between the two general classes of cancer-causing genes (oncogenes and tumor-suppressor genes).” Oncogenes (tumor-inducing genes) induce changes in cell phenotype. Adenovirus oncogene E1A can immortalize primary cells and can also cooperate with the adenovirus E1B gene or other oncogenes to transform cells in culture. The transformed cells will induce tumors in animals. E1A encoded proteins are potent regulators of gene expression able to modulate transcription of both viral and cellular genes. E1A proteins activate transcription of the other adenovirus early genes and certain cellular genes. They also repress transcription of genes linked to certain viral or cellular enhancers.

In addition to his work on oncogenes, while at CSHL, Dr. Harlow and Nick Dyson worked under a relationship between CSHL and Amersham on monoclonal antibodies. Dr. Harlow left CSHL in February of 1991 to become a scientific director at Massachusetts General Hospital in Boston.

The formal relationship between CSHL and ICOS began in April 1990 with a licensing agreement under which ICOS was obligated to pay CSHL royalties for all PDE [phosphodiesterase] products developed by ICOS that used Michael Wigler’s patented techniques. ICOS eventually developed the popular drug Cialis from Dr. Wigler’s technology. This portion of the Collection is restricted due to confidentiality obligations between ICOS and CSHL.