On Saturday, June 11, 1904, a gala dedication ceremony took place on the grounds of the Bio Lab to mark the formal opening of the Carnegie Institution’s Station for Experimental Evolution.

Charles Davenport, director of the new station, made the following Introduction:

“We do not celebrate here the completion of a building; we are dedicating no pile of bricks and lumber—rather, this day marks the coming together for the first time of the resident staff for their joint work, and we dedicate this bit of real earth, its sprouting plants and its breeding animals, here and now, to the study of the laws of the evolution of organic beings.”

There were several buildings already on the site, but the first Carnegie Building research laboratory erected by the Carnegie Institution at Cold Spring Harbor was the Main Building (now the Carnegie Library), finished in 1905. This two-story rectangular structure, built near the head of the harbor, was a Mediterranean variant of the Second Renaissance Revival style (the first revival had come into vogue before the Civil War).

Constructed of brick with frame partitions and floors and finished in stucco, it featured classical detailing around the doors and windows set off by brick trim. Its flattened hipped roof had flaring overhanging eaves supported by wooden brackets. A smaller monitor roof, also hipped, sat on top of the main roof. Between this higher roof and the main roof were short, horizontal clerestory windows to light the attic.

In its general appearance the new laboratory for the Carnegie Institution could easily have been mistaken for one of the hundreds of libraries that the Carnegie Foundation erected for communities throughout the United States in the early years of the twentieth century. In fact, since 1953, the building has been the Laboratory Library.

The design of the building was commissioned from Kirby, Petit & Green, a New York City architectural firm proficient in all the popular styles of the day.

The Carnegie Institution’s Italian Renaissance-inspired main building housed diverse but important functions at the Station. Two large Breeding Rooms occupied the south and east sides of the ground floor, and an Aquatic Animals Room filled with aquaria was situated on the north side. An entrance Vestibule was located in the center of the front of the building. On either side of the Vestibule were a Work Room and a Food Room, with a wide stair hall behind.

Situated around the stair hall on the second floor was a series of rooms for research, together with a Secretary’s Room and a small Library. The entire south end was taken up by a Bird & Insect Room, which was lit from above by an extensive multipaned skylight (now gone).

On the unfenestrated west side of the basement floor were a Photographic Dark Room, a Dark Room for Cave Studies, to which a newly excavated cave was later connected, and a Low-Temperature Room. On the east side, which had small windows facing in the direction of the harbor, were a Coal Room, a Boiler Work Room, and a room for Food Storage.

Although the staff of the Carnegie Institution’s Station for Experimental Evolution was small at first, important early work was performed both in and around the Main Building. Immediately after receiving his Ph.D. from the University of Chicago in 1906 George Shull (1874–1954) came to Cold Spring Harbor and began planting maize (Indian corn) in an experimental garden on the east side of the Main Building. By 1908 he was reporting in the Carnegie Institution of Washington Yearbook experiments that became world-famous. Shull showed that when two different but carefully inbred strains of corn were crossed, the yield was 20% higher than if each strain were allowed to self-pollinate. This phenomenon of “hybrid vigor” that he demonstrated experimentally was later employed in commercial seed production to create high-yielding strains that today make corn the most important agricultural crop in the United States.

Also in 1908, in the basement of the Main Building, Charles Banta conducted cave experiments aimed at inducing color mutations in tadpoles of the tiger salamander.

In 1914, the Animal House (now McClintock Laboratory) was completed and the animal breeding experiments at Cold Spring Harbor were moved from the Main Building to this new facility. 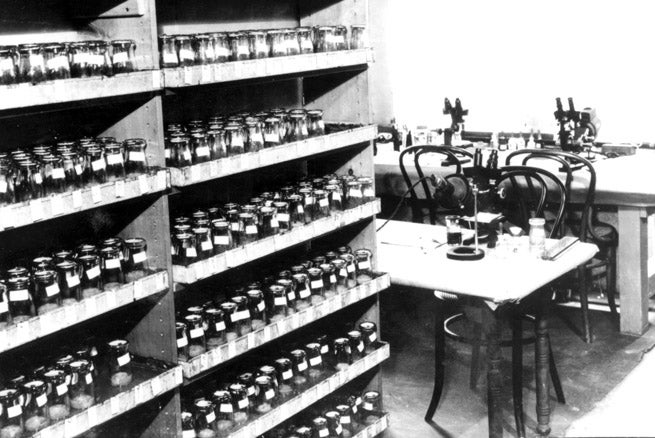 In 1923, Cornell-trained biogeneticist Milislav Demerec (1895-1966) was appointed to the Carnegie Department of Genetics by assistant director Albert Blakeslee (1874–1954). Although trained as a maize geneticist, Demerec soon turned his efforts at Cold Spring Harbor to the fruit fly Drosophila.

His work was done on the second floor of the Main Building. In the late 1930s Demerec and Calvin Bridges, who was at the California Institute of Technology, collaborated during the summers on drawing large-scale maps of the four Drosophila chromosomes, which was considered quite a feat in those days. By 1940 the first edition of Demerec’s Drosophila Guide appeared. This classic in its field was destined to go through eight editions, the last appearing in 1969.

Barbara McClintock was a member of the Carnegie staff and the cornfields where she found evidence of movable genetic switches—“jumping genes”—that can turn genes on and off were next to the Main Building.

As early as 1946 it had become apparent that a major new building would be required if the genetics program at Cold Spring Harbor were to have a future in a scientific world in which molecules as well as chromosomes were investigated. The 1905 Main Building and the 1914 Animal House were inadequate for the kinds of research they now wished to do. In 1953 the Demerec Laboratory was completed and the Main Building officially became the Carnegie Library. In addition to housing laboratories, the Main Building had long served as the main repository of reference works and journals for both the Carnegie Department of Genetics and the Bio Lab, and this was now its sole function.

In 1978 the QUEST (QUantitative Electrophoresis Standardized in Two Dimensions) computer laboratory of Jim Garrels was installed on the top floor of the Carnegie Library.

The library attic was renovated in 1988 to house the Laboratory Archives, which was officially established in 1972.

In 2002, the journal’s section of the Press left the second floor of the building and moved to the new Woodbury facility. The James D. Watson Collection is now housed on the second floor, along with staff offices, and the new Oral History Office.