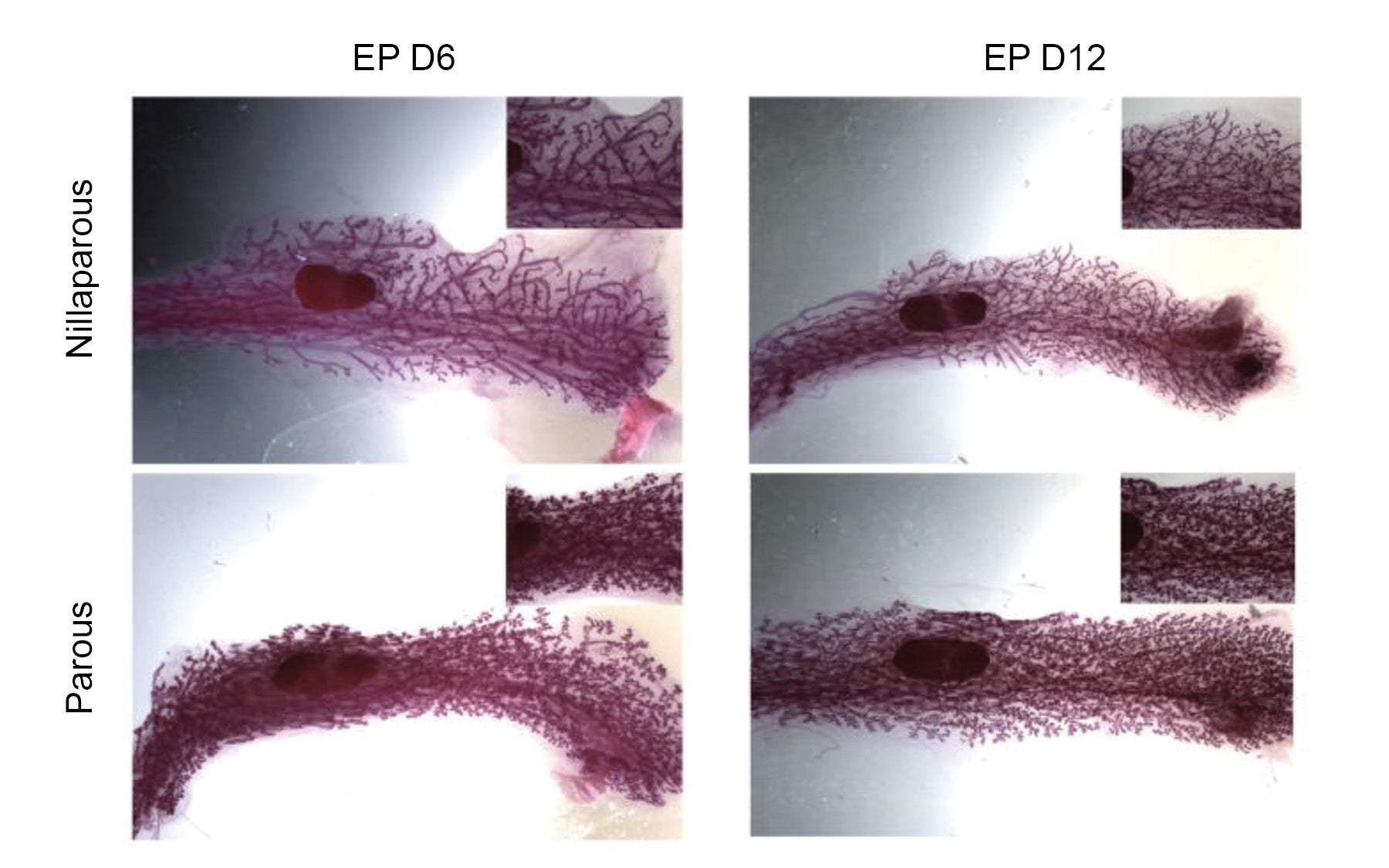 These images show the effect of pregnancy hormones after 6 and 12 days on breast tissue in mice that have never been pregnant (top row) and mice that have been pregnant once before (bottom row). The mammary gland in previously pregnant mice responds earlier and produces more branching ductal structures, used in lactation. New research shows breast tissue retains a cellular memory of prior pregnancy that makes response more rapid and vigorous in subsequent pregnancies.
email envelop icontwitter icon share buttonfacebook icon share buttonlinkedin icon share button

Cold Spring Harbor, NY — Anecdotal reports of nursing mothers have long suggested that giving milk is a lot easier in second and subsequent pregnancies, compared with a first pregnancy. Now, researchers at Cold Spring Harbor Laboratory (CSHL) are able to explain why.

Their work shows the mammary gland forms a long-term memory of pregnancy that primes it to respond to the hormonal changes that announce succeeding pregnancies. The memory lasts throughout an individual’s reproductive years. The results appear online today in Cell Reports.

Secretion of the hormones estrogen and progesterone set the stage for dramatic changes that take place in the breast during pregnancy: a massive proliferation of mammary epithelial cells, and the formation of thousands of ductal structures, which support milk production and transport during lactation.

A team led by HHMI Investigator Greg Hannon, a CSHL Professor and also a Professor and Senior Group Leader at the CRUK Cambridge Institute at the University of Cambridge, hypothesized that pregnancy might alter the gland’s receptiveness to pregnancy-related hormones. Specifically, they sought to determine if this might occur via changes in a set of chemical marks that attach to DNA, the genetic material. Such marks—molecules of methyl (CH3), for instance—are called epigenetic marks, and their presence or absence in particular locations in the genome can either prevent genes from being expressed, or promote their expression.

Camila dos Santos, now a CSHL Assistant Professor, developed a technique critical to the newly reported experiments when she was a postdoctoral investigator in the Hannon lab. Dos Santos found a marker of mammary stem cells that enabled her to isolate highly purified stem cells in addition to a number of other cell types specific to the mouse mammary gland—six in all. From these, she generated genome-wide profiles of where methyl groups attach to the DNA. Of all the epigenetic marks, methyl marks tend to be the longest lasting, and are often permanent.

Working with Andrew Smith, a computational biologist from the University of Southern California, they found that cells sampled from young mice that had been through a single pregnancy cycle had methylation marks that were “substantially different” from marks in cells sampled from mice of the same age that had never been pregnant. “Of those changes,” says Hannon, “we were able to trace a majority to places in the genome where a single transcription factor, called Stat5a, binds. This is really remarkable—so many changes in methylation, and you can track them down to a single factor.” Like all transcription factors, Stat5a binds to DNA and in so doing changes the way a specific gene or genes are expressed.

The team shows that a first pregnancy erases many methyl marks that are present throughout life leading up to pregnancy. During a first pregnancy, the team suggests, Stat5a binds DNA in certain types of mammary epithelial cells, at places near genes that need to be activated during pregnancy—specifically, genes involved in proliferation and lactation. As the team showed in mice, when a once-pregnant female receives hormones whose action simulates a real pregnancy, the mice respond more rapidly than other, never-pregnant mice given the same hormones. In the previously pregnant mice, “the mammary glands start expanding faster and also sooner than for those experiencing pregnancy hormones for the first time,” says dos Santos. “It’s as if the gland already knows those hormones.”

“This is an example of epigenetic memory: it is the loss of DNA methylation that is now marking sites in the genome that were active in a previous pregnancy,” dos Santos says. When the same sites were examined a year after pregnancy (or exposure to pregnancy hormones), they remained unoccupied by methyl marks. “The cell is not replenishing DNA methylation at these sites, even after several cell divisions, which means the memory of previous pregnancy is long-term.”

These findings have led to another important line of research. It is well known that women who become pregnant by age 25 have substantially lower rates of breast cancer than women who bear children later in life or not at all. It is possible that the implied protective factor is in some way related to the epigenetic memory of mammary cells just discovered, Hannon says.

Dos Santos says her lab is now “trying to understand which of the modifications we found in this study might prevent development of breast cancer in a pregnancy-related manner.”

The research described in this release was supported by the NIH and the CSHL Cancer Center.

“An Epigenetic Memory of Pregnancy in the Mouse Mammary Gland” appears online May 7, 2015 in Cell Reports. The authors are: Camila O. dos Santos, Egor Dolzhenko, Emily Hodges, Andrew D. Smith, and Gregory J. Hannon.  The paper can be viewed at: http://www.cell.com/cell-reports/newarticles