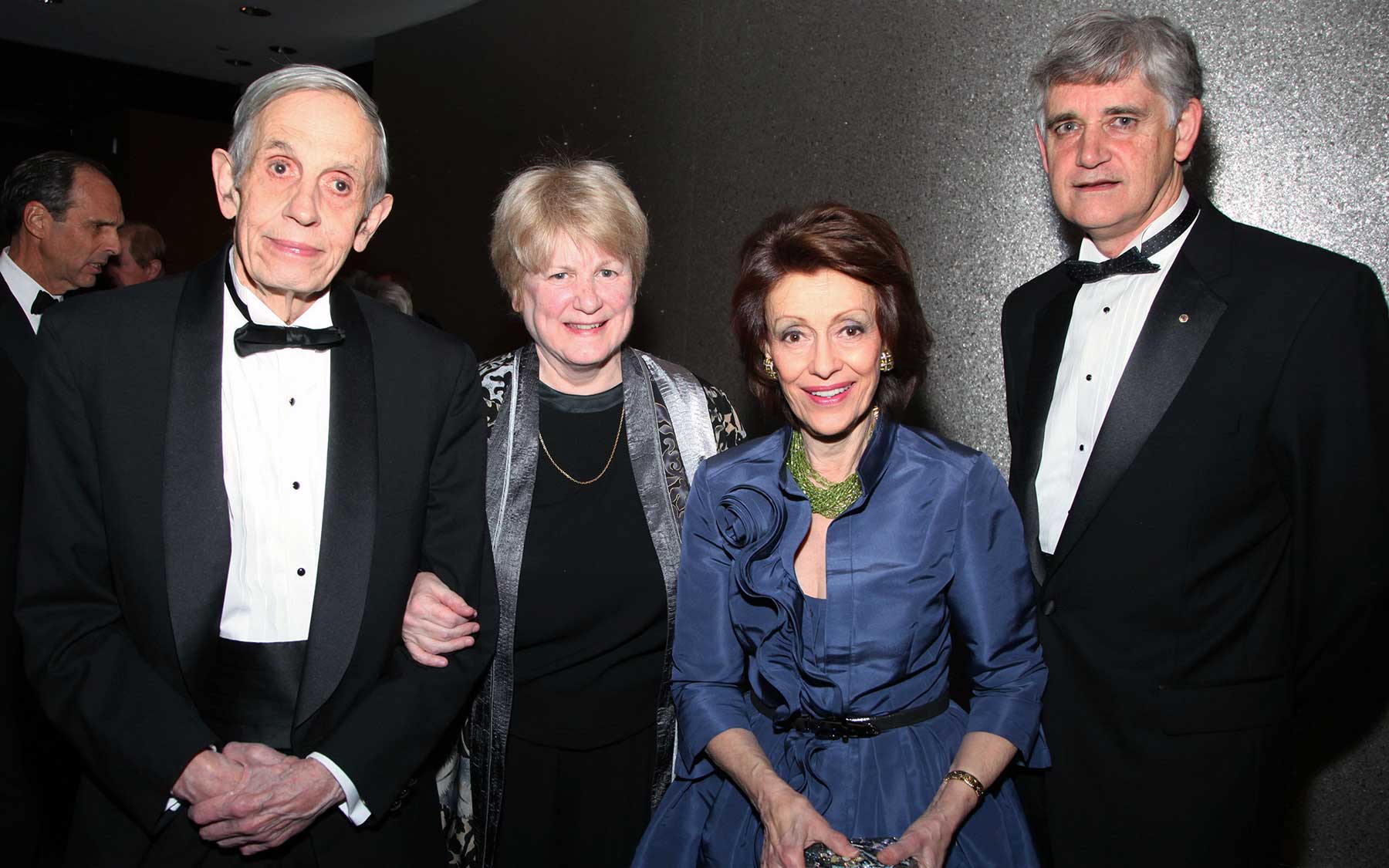 Left to right: John F. Nash , Jr., Mary-Claire King, Evelyn Lauder, and Bruce Stillman. King, Nash, and Lauder were each awarded a Double Helix Medal in 2010. This year will be the 10th Double Helix Medal Dinner, held at the American Museum of Natural History in New York City.
email envelop icontwitter icon share buttonfacebook icon share buttonlinkedin icon share button
By the 1970s, the notion that breast cancer “runs in the family” had been around for a long time. Yet the question of precisely how family history might influence breast cancer risk was still wide open. Mary-Claire King, a human geneticist who turned her attention to the disease during that decade, reacted to the challenge of untangling breast cancer’s causes by asking: “Can I follow chromosomes?”

It’s that thinking that led her to discover the first breast cancer-linked gene—known as BRCA1—in 1990, proving for the first time that breast cancer is indeed passed from generation to generation in some families. On several occasions, it also led her to visit CSHL, an institution that has combined excellence in molecular biology and genetics research with a strong focus on cancer.

Mary-Claire King speaks about how much was yet to be understood about the genetic mechanisms of cancer when she began her hunt for genes associated with breast cancer.

King, who is now a Professor of Genome Sciences and of Medicine at the University of Washington, never conducted research at CSHL. But she was a natural addition to CSHL’s extended family of scientist-visitors, investigators from all over who gather periodically to discuss new work and new ideas about the most important questions in biology and medicine.

In the years following her BRCA1 discovery, King visited CSHL on several occasions to exchange ideas with other geneticists. BRCA1 was a hot topic at the 1994 Symposia on Quantitative Biology LIX: Molecular Genetics of Cancer and was the focus of an entire meeting titled The Biology of BRCA1 at CSHL’s Banbury Center in 1997.

The discovery was certainly deserving of the attention. We know now that mutations in the genes BRCA1 and its counterpart BRCA2 together account for between 5 and 10 percent of all breast cancers. A staggering 55 to 65 percent of women who inherit a harmful BRCA1 mutation will develop breast cancer by the time they reach the age of 70.

Testing for this potentially devastating mutation has empowered countless women and men to gain an invaluable level of control over their health. The actress Angelina Jolie is a prominent recent example of a woman whose life may well be saved by the knowledge that she carries a BRCA1 mutation. She made the difficult decision to undergo a prophylactic double mastectomy in 2013 to reduce her risk of falling prey to the disease that claimed her mother’s life.

As important as King’s work on BRCA1 was, it’s just one of her many remarkable scientific achievements. Among others: her research showing that chimps and humans share about 99 percent of their genetic material and her pioneering efforts to use DNA sequencing forensically in human rights investigations.

CSHL awarded a Double Helix Medal to King in 2010 in recognition of her incredible research in breast cancer and beyond. And in the most recent of her many high honors, in 2014 King won the Lasker-Koshland Special Achievement Award in Medical Science.  October is Breast Cancer Awareness Month, a good time for us all to honor the achievements of Mary-Claire King, a research trailblazer.