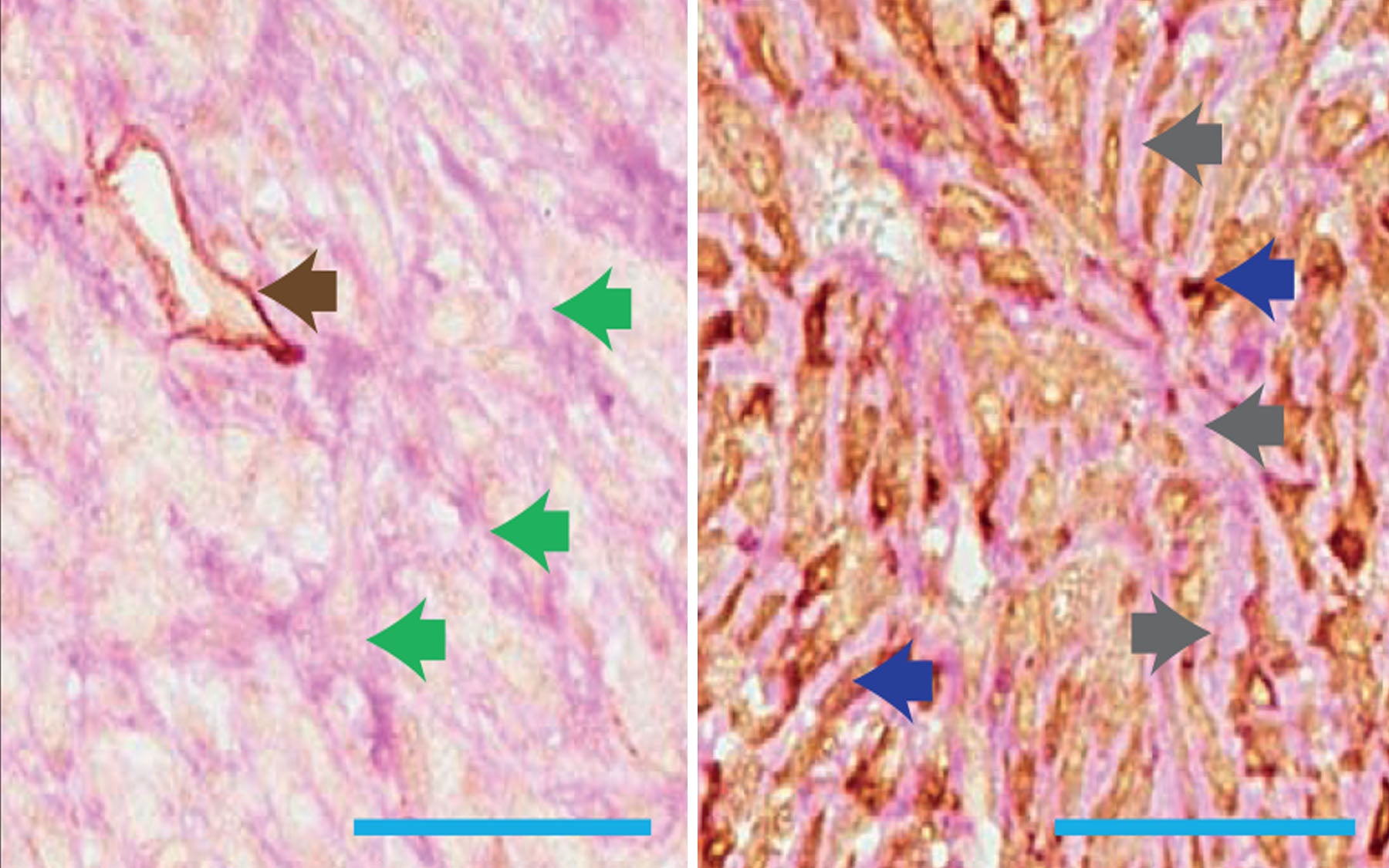 Two adjacent sections of a mouse breast tumor. Tissue at left is stained so that normal blood vessels can be seen (black arrow). Extending from these vessels are blood filled channels (green arrows). On the right, the tissue is stained for a fluorescent protein expressed by the tumor cells. Here it is seen that blood-filled channels are actually formed by tumor cells in a process known as vascular mimicry.  The team demonstrate that the tumor cells lining these channels help drive metastasis, the process by which tumors spread.
email envelop icontwitter icon share buttonfacebook icon share buttonlinkedin icon share button

Cold Spring Harbor, NY — Imitation may be the sincerest form of flattery, but it can also have deadly consequences, at least when it comes to tumor cells.

A team of researchers from Cold Spring Harbor Laboratory (CSHL) and the CRUK Cambridge Institute at the University of Cambridge has shown in a mouse model that the ability of tumor cells to form tubular networks that mimic blood vessels can help drive metastasis, the spread of breast cancer to different sites in the body.

The team has discovered that two genes, Serpine2 and Slpi, help direct a phenomenon known as “vascular mimicry.” Vascular mimicry involves the formation of tubular networks made of tumor cells, which can transport blood to different parts of a tumor. These tubular networks are thought to be able to provide the tumor with oxygen and nutrients, thus mimicking the role of blood vessels. The researchers found that reducing the expression of Serpine2 or Slpi in a primary tumor reduced vascular mimicry in the tumor.

The team was led by CSHL Professor and HHMI Investigator Gregory Hannon, who is also a Professor at the University of Cambridge and by Simon Knott, a research investigator at CSHL. CSHL postdoctoral investigator Elvin Wagenblast is the first author of the report announcing the findings today in Nature.

Vascular mimicry appears also to allow tumor cells greater access to the bloodstream, from where they can spread to other sites in the body. Overexpressing Serpine2 or Slpi led to more tumor cells being able to get into the blood. These same genes have previously been found to be overexpressed in human patients whose cancers had spread to their lungs.

“It’s very neat to watch and see cells evolve to have these capacities,” says Knott. “But on the other hand it’s really scary to think that these cells are sitting there in people doing this.”

The fact that the products of the genes in question, Serpine2 and Slpi, are secreted proteins means that they are both potentially targetable. That’s something the researchers are looking into. “Targeting them might provide therapeutic benefits, but we’re not sure yet,” says Knott. Targeting these proteins could prevent tumor cells from exiting a secondary site and spreading further.

In past years, efforts have been made to treat tumors by using drugs called angiogenesis inhibitors that curb the formation of new blood vessels, as tumors need blood vessels to grow and spread. These drugs have not been as successful as hoped in patients, and one reason could be because vascular mimicry kicks in to help tumors get nutrients and oxygen, speculates Wagenblast. “Maybe by targeting angiogenesis and also vascular mimicry at the same time we might actually have a better benefit in the clinic in the long run,” he says.

The researchers are now examining what it takes for tumor cells that have exited from a primary tumor into the bloodstream to then get out of the bloodstream and colonize a new site in the body. “We’ve identified some interesting targets that we think seem to be key for this step,” Knott says.

This work was supported by the Howard Hughes Medical Institute, the National Institutes of Health, Kathryn W. Davis, the Hope Funds for Cancer Research and the Boehringer Ingelheim Funds.