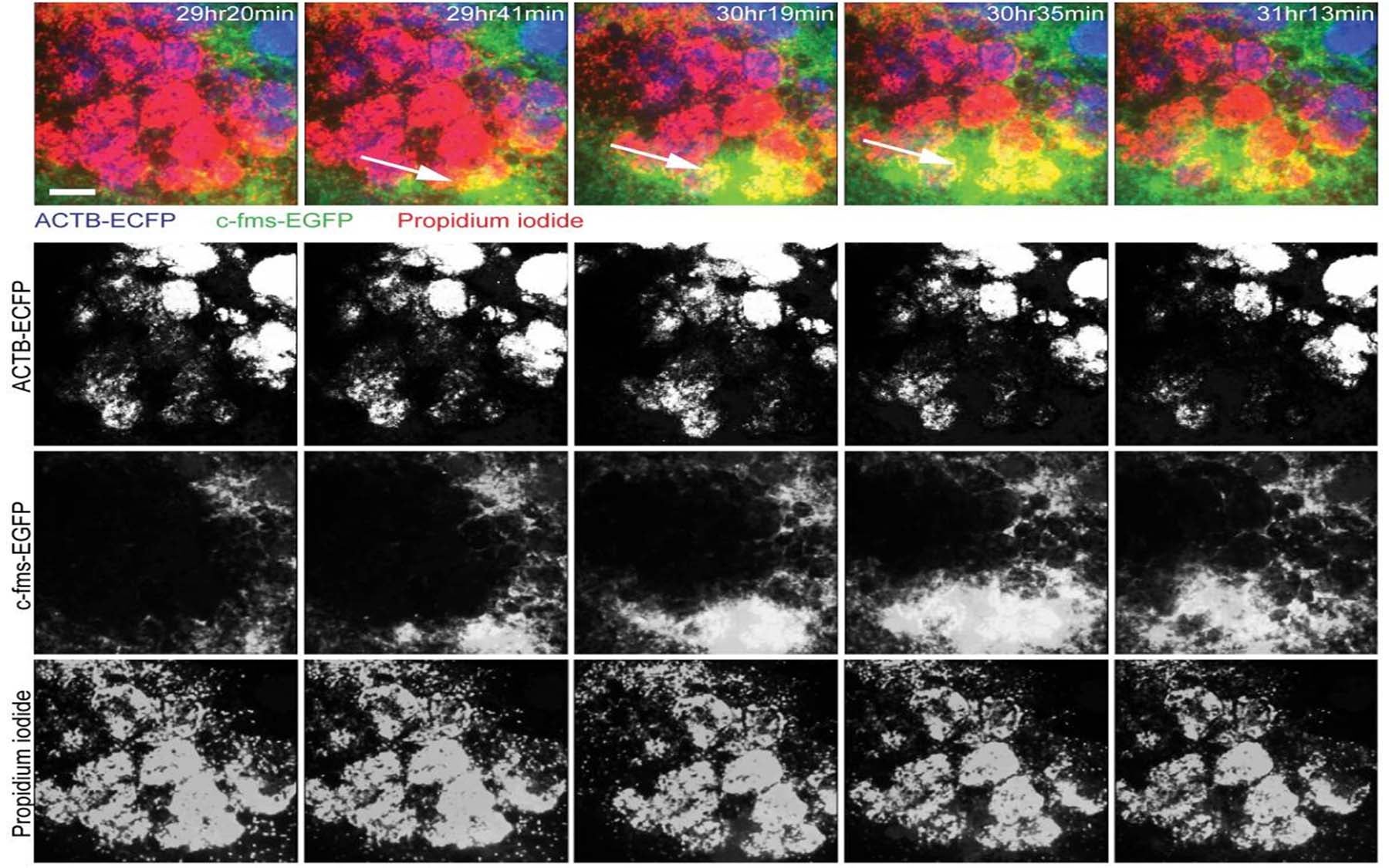 Cold Spring Harbor, NY — It should be possible to significantly improve the response of common cancers to existing “classical” chemotherapy drugs, say scientists at Cold Spring Harbor Laboratory (CSHL), by introducing agents that alter the interaction of cancer cells with their immediate surroundings, called the tumor microenvironment. In research published online today in the journal Cancer Cell, CSHL Assistant Professor Mikala Egeblad and her team report using “live” microscopy to observe how cancer cells in mouse tumors react to the widely used chemotherapeutic agent doxorubicin. They found that selective inhibition of two factors that regulate the tumor microenvironment—enzymes called matrix metalloproteinases (MMPs) and a class of immune signaling molecules called chemokines—made breast tumors in mice more responsive to the drug.

It is well known that genetic mutations and epigenetic changes in cancer cells contribute to a tumor’s capacity to resist treatment. But tumors contain many other cells besides cancer cells and surprisingly little is known about how factors secreted from these non-cancerous cells—“stromal” cells, which constitute the tumor microenvironment—influence drug resistance.  Such cells include white blood cells, some of which are inflammatory.

Egeblad’s team used real-time microscopic imaging to scrutinize how cancer cells react to doxorubicin in the context of different tumor microenvironments. The resulting time-lapse movies revealed how drugs flowed through—and leaked out of—blood vessels feeding tumors; the manner and rate at which drugs killed cancer cells in tumors of different stages of advancement; and dynamics of the interactions between cells of the tumor and those of the surrounding stromal tissue, before, during and after drug administration.

“We were able to see clearly that the microenvironment contributes critically to drug response,” Egeblad says, “specifically via regulation of the permeability, or ‘leakiness,’ of blood vessels running through and around the tumor, and also by impacting the local recruitment of inflammatory cells.”

When viewed at the microscopic level, resistance to doxorubicin was found to be associated with tumor stage. Observing tumors continuously following drug administration led to the discovery that this response correlated with the ability of blood vessels to transport doxorubicin to the cancer cells, which was comparatively greatest not early or late, but at intermediate stages of tumor development.

Mice engineered to lack the gene that encodes the MMP9 enzyme, which helps regulate the permeability of blood vessels, ”had significantly leakier blood vessels, and this corresponded strikingly with a better response to doxorubicin,” according to Egeblad.

Existing chemical inhibitors of MMP enzymes have failed in clinical trials, she noted. “But our data suggest that these or other drugs that affect vascular permeability could be used to achieve better responses to chemotherapies.”

Another important discovery gleaned from the CSHL team’s real-time imaging was that myeloid cells—inflammatory cells that are one of the most common kinds of non-cancerous cells in tumors—were consistently recruited to the tumor site during chemotherapy. Myeloid cells tend to be drawn to places where cells have died. The team found that this attraction, called chemotaxis, is the result of the activation of signaling by CCL2, a member of a class of immune cell recruiting molecules called chemokines.

In time-lapse microscopy, myeloid cells (green) are shown infiltrating an area of massive cell death (red) in a mouse treated with the anti-cancer drug doxorubicin.

By knocking out the gene encoding the receptors (called CCR2) for this chemokine, the team was able to diminish myeloid cell recruitment to the tumor. Importantly, this also resulted in a significantly improved response to doxorubicin and to another commonly used chemotherapy drug, cisplatin. This observation is important because it points to a novel way of potentially boosting the cancer cell-killing effectiveness of chemotherapeutic drugs.

The CSHL team now has the goal of finding additional ways to boost the response to chemotherapy by determining how the myeloid cells that are recruited to tumors during chemotherapy contribute to the response of cancer cells to drug treatment.