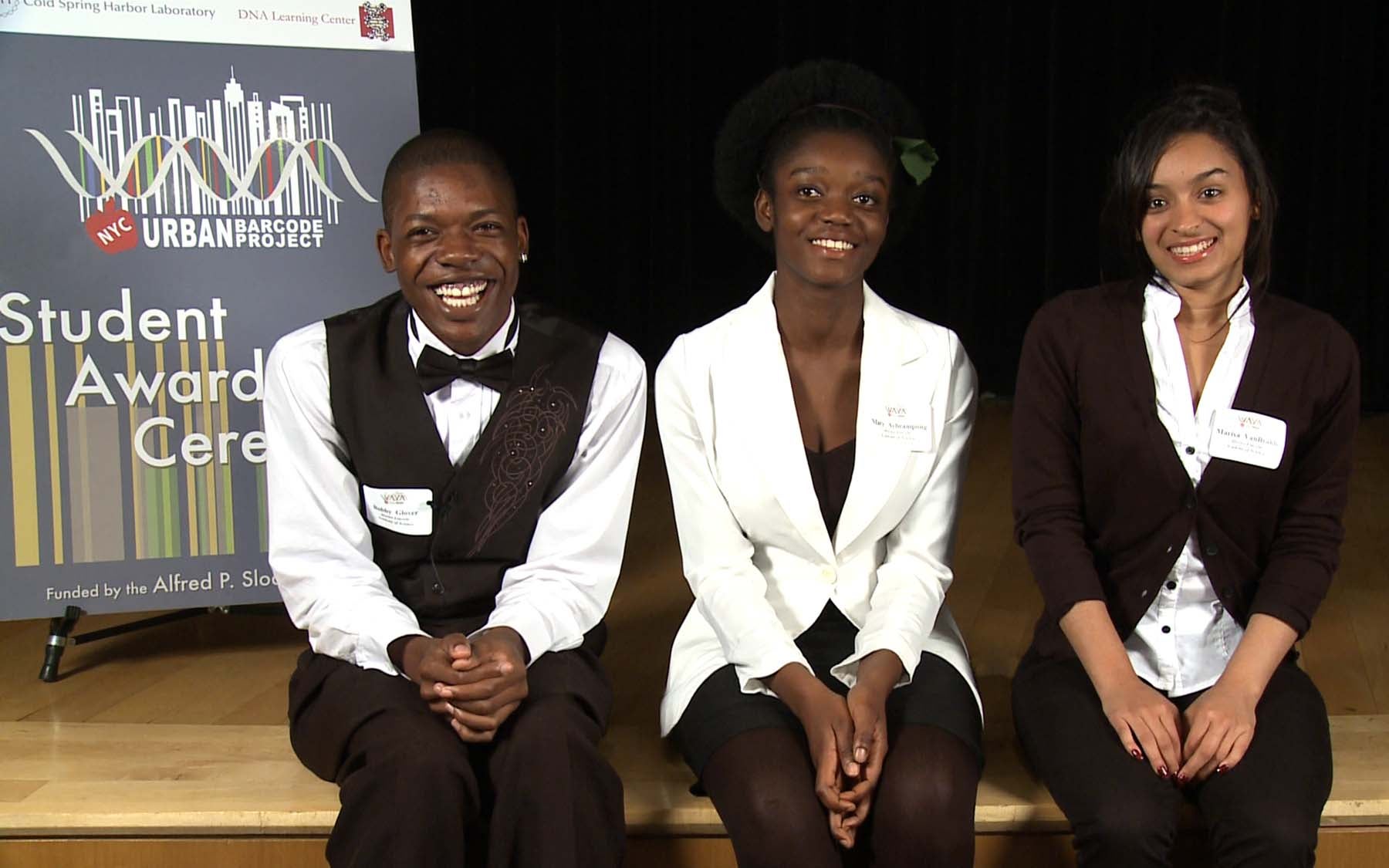 New York, NY — Cold Spring Harbor Laboratory (CSHL) announced on June 6 that Hostos-Lincoln Academy of Science students Mary Acheampong, Bobby Glover and Marisa VanBrakle are the winners of the first ever Urban Barcode Project (UBP, www.urbanbarcodeproject.org) grand prize scholarship. Nine teams of high school students made it to the finals, each hoping that their DNA study of biodiversity in New York City would win the $10,000 grand prize or $10,000 in runner-up prizes.

Guided by their teacher/mentor Allison Granberry, the Hostos-Lincoln Academy team used DNA barcoding to conclude that many herbal products sold in health stores and ethnic markets as Ginkgo contain little to no Ginkgo biloba DNA at all! Leaves sold by one herbalist were identified as Belladonna, a highly poisonous plant contained in an herbal product that hospitalized five Queens residents in 1994. “The best thing about this is knowing that all of our work in the lab is actually being recognized,” said co-winner VanBrakle, “and that there is a way to prevent these harmful incidents from happening.”

Project organizers from CSHL’s DNA Learning Center (DNALC) hope that the project will be replicated around the world as part of the international effort to assess global biodiversity. “I think we have come up with a mechanism to allow large numbers of students to do meaningful, independent science projects,” said David Micklos, executive director of the DNALC. New York City institutions, including the American Museum of Natural History, Genspace, New York Botanical Garden, Brooklyn Bridge Park, and the Rockefeller University partnered with the DNALC to provide facilities and mentoring to the student teams.

“The UBP demonstrates that kids are hungry for hands-on science and technology experiences and our mission through Cold Spring Harbor Laboratory’s DNALC programs is to make genetics accessible to them,” said CSHL President Bruce Stillman in his address at the award ceremony. “These students were enthusiastic about learning in a new way—with no text books, no Google searches—by finding the answers to scientific questions on their own through experiments.”

The June 6 final presentations were the culmination of months of work that involved collecting specimens and analyzing DNA barcodes, which identify different living things, just like product bar codes identify different items for sale in a store. The 25 students on the nine finalist teams represented eight public high schools, plus home schooling, from all of the five Boroughs of New York City. They were selected from over 200 students on 75 teams, whose research posters were judged by conservation and genetic biologists and education experts last week. For most students it was their first independent research project. Twenty-six percent of contestants were African American or Latino, groups that are underrepresented in science. Among the contestants was a team of girls who knew little English and nothing about DNA when they emigrated from Bangladesh this year.

The student projects were as diverse as the city they represent. Speaking at the awards event, Jesse Ausubel, Director of Rockefeller University’s Program for the Human Environment and Alfred P. Sloan Foundation Program Director, said the 75 teams “inspired me and all the other judges (with) projects about moss and lichens and birches and Christmas trees; about biblical citrons and Mexican melons and Chinese pears; about fungal diversity of Central Park and mushrooms for sale in Chinatown and about the absence of Ginkgo DNA in Ginkgo products; about cod and catfish and crab and small killifish, whose common name goes back to the Dutch word for creek, kill; about salamanders and mosquitoes and nematodes and bedbugs; about Jamaica Bay and about weeds in tree boxes and about ants of the South Bronx; about content of pet food and animal and plant origins of adhesives and glues in artworks.”  Ausubel described the growing role for the Big Apple in science and the UBP kids as the “fast-rising yeast of 21st century science in New York City.”

The UBP is the first large-scale attempt to involve students in barcoding projects to explore the urban environment on their doorsteps. “Thanks to funding from the Alfred P. Sloan Foundation, the DNALC was able to establish all the infrastructure and get a viable program going from start to finish in only 18 months,” explained Micklos.

The UBP winners and (mentors) were: