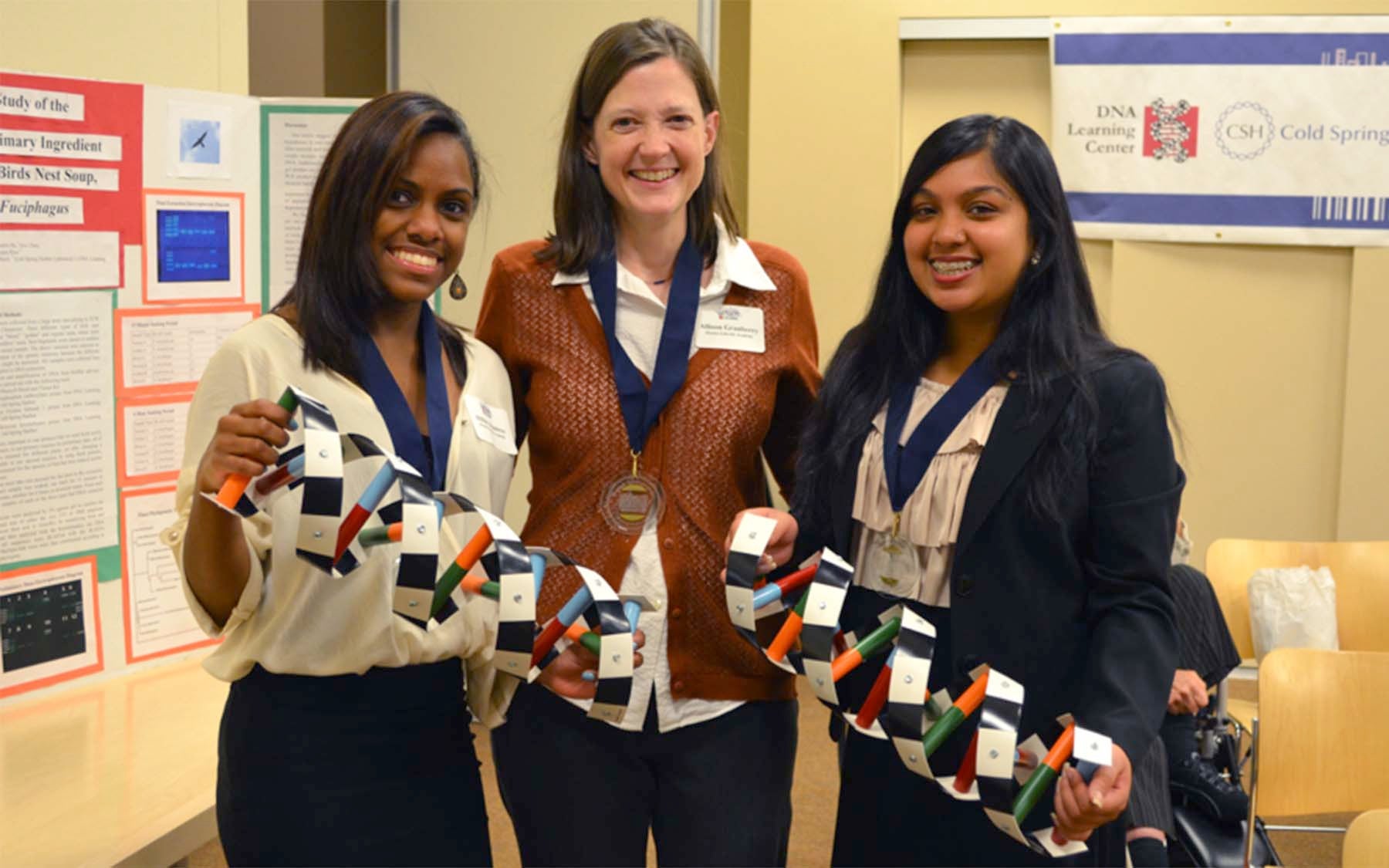 Six teams of high school students from all five boroughs made it to the finals, each hoping that their DNA study of biodiversity in New York City would take top honors.

Guided by their teacher/mentor Allison Granberry, the Hostos-Lincoln Academy team, taking part in the competition for the second consecutive year, decided to use DNA barcoding to examine ant biodiversity in St. Mary’s Park in the Bronx.

After collecting hundreds of samples (using Pecan Sandies cookies as bait!), seven ant species were identified and evidence for population structure was found for one, Tetramorium caespitum.

Hillary observed, “I learned that the urban environment can have a lot of biodiversity. When we started our study last year, we were head on that biodiversity in urban environments does not exist. This year, we have completely shifted away from that idea…and we are seeing that it does exist by studying these ants. There are different ants all over New York City.”

Kavita went on to explain, “There are small microcosms of ant diversity in cemeteries, in small green infrastructure like rooftops and medians, municipal parks and all over.”

The winners this year “demonstrated how much perseverance pays off in scientific research,” said David Micklos, Executive Director of the DNA Learning Center (DNALC) at CSHL, which organized the competition. “If you continue on with your work, add new dimensions, increase your knowledge, increase your ability to communicate in an effective way, the project can only get better.”

Now in its second year, the barcode contest is a model for how large numbers of students can do meaningful, independent science projects. The effort brings together the biological research strengths of several New York City institutions, including the American Museum of Natural History, Genspace, New York Botanical Garden, Brooklyn Bridge Park, and the City University of New York (CUNY). These organizations partnered with the DNALC to provide facilities and mentoring to the student teams. More information on the DNA Learning Center.

“Kids are hungry for hands-on science and technology experiences and it is the mission of Cold Spring Harbor Laboratory’s DNALC to make genetics accessible to them,” said CSHL President and CEO Dr. Bruce Stillman.

The 15 students on the six finalist teams represented four public high schools and two private schools, from all of the five Boroughs of New York City. They were selected from 113 students on 41 teams, whose research posters were judged the previous week by a panel of conservation biologists, geneticists, and education experts.

For most students it was their first independent research project, but 14 teams had one or more students returning from last year’s UBP competition. Twenty-four percent of contestants were African American or Latino, groups that are underrepresented in science.

George Amato, Director, Sackler Institute of Comparative Genomics  and Susan Perkins, Associate Curator, Invertebrate Zoology at the American Museum of Natural History, joined DNALC’s Micklos as judges. One of the first scientists to start DNA barcoding with the World Wildlife Conservation Society, Amato commented the finalist teams “were all winners, because they were well-selected from a great competition and a great program.”

The UBP is the first large-scale attempt to involve students in barcoding projects to explore the urban environment on their doorsteps.