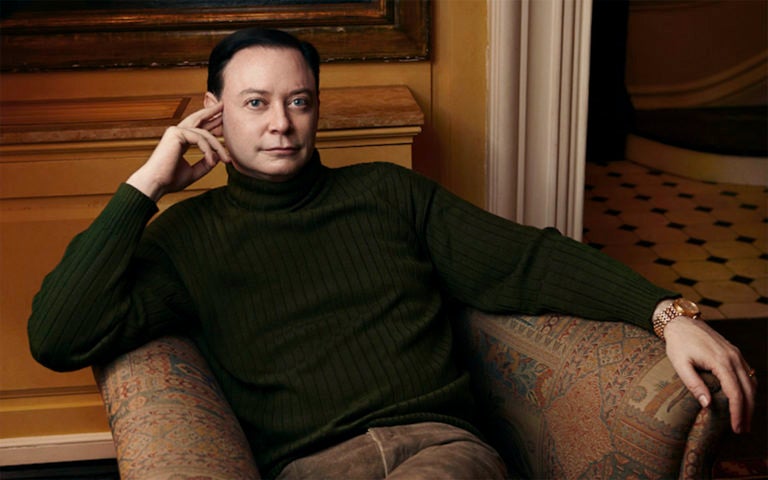 Andrew Solomon is a writer and lecturer on politics, culture and psychology.

Solomon’s newest book, Far From the Tree: Parents, Children, and the Search for Identity, published on November 13, 2012, won the National Book Critics Circle award for nonfiction; the J. Anthony Lukas award; the Anisfield-Wolf Award; the Wellcome Book Prize; Books for a Better Life Award; Yale University’s Research Advocacy Award; the GRASP Friend and Benefactor award; the Fountain House Humanitarian Award; the Mike Wallace Award of the University of Michigan; the Columbia Gray Matters Award; the Green Carnation Prize; and the Distinguished Achievement Award in Nonfiction of the National Council on Crime and Delinquency.

It tells the stories of parents who not only learn to deal with their exceptional children, but also find profound meaning in doing so.  Solomon’s startling proposition is that diversity is what unites us. He writes about families coping with deafness, dwarfism, Down syndrome, autism, schizophrenia, multiple severe disabilities, with children who are prodigies, who are conceived in rape, who become criminals, who are transgender. While each of these characteristics is potentially isolating, the experience of difference within families is universal, as are the struggles toward compassion and the triumphs of love Solomon documents in every chapter.  Woven into these courageous and affirming stories is Solomon’s journey to accepting his own identity, which culminated in his midlife decision, influenced by this research, to become a parent.

The New York Times hailed the book, writing, “It’s a book everyone should read… there’s no one who wouldn’t be a more imaginative and understanding parent — or human being — for having done so… a wise and beautiful book.”  People described it as “abrave, beautiful book that will expand your humanity.”

Solomon’s previous book, The Noonday Demon: An Atlas of Depression (Scribner, 2001), won the 2001 National Book Award for Nonfiction, was a finalist for the 2002 Pulitzer Prize, and was included in The Times of London‘s list of one hundred best books of the decade. A New York Times bestseller in both hardcover and paperback editions, The Noonday Demon has also been a bestseller in seven foreign countries, and has been published in twenty-four languages.  The New York Times described it as “All-encompassing, brave, deeply humane… a book of remarkable depth, breadth and vitality… open-minded, critically informed and poetic all at the same time… fearless, and full of compassion.”

In 1988, Solomon began his study of Russian artists, which culminated with the publication of The Irony Tower: Soviet Artists in a Time of Glasnost (Knopf, 1991).  He was asked in 1993 to consult with members of the National Security Council on Russian affairs.  His recently reissued first novel, A Stone Boat (Faber, 1994), the story of a man’s shifting identity as he watches his mother battle cancer, was a national bestseller and runner up for the Los Angeles Times First Fiction prize; it has since been published in five languages.

From 1993 to 2001, Solomon was a contributing writer for the New York Times Magazine, writing on a wide range of subjects; he has also written periodically for The New Yorker.  Such journalism has spanned many topics, including depression, Soviet artists, the cultural rebirth of Afghanistan, and Libyan politics.

In 2003, Solomon’s article, “The Amazing Life of Laura,” a profile of diarist Laura Rothenberg, received the Clarion Award for Health Care Journalism, and the Angel of Awareness Award from the Cystic Fibrosis Foundation. In April 2009, his article, “Cancer & Creativity: One Chef’s True Story,” received the Bert Greene Award for Food Journalism by the International Association of Culinary Professionals; the story was also a finalist for the 11th Annual Henry R. Luce Award. Solomon’s reminiscence on a friend who committed suicide won the Folio Eddie Gold Award in 2011.

He has authored essays for many anthologies and books of criticism, and his work has been featured on National Public Radio’s Moth Radio Hour.

Solomon is an activist and philanthropist in LGBT rights, mental health, education and the arts. He is founder of the Solomon Research Fellowships in LGBT Studies at Yale University, and a member of the boards of directors of the National Gay and Lesbian Task Force and Trans Youth Family Allies.  A frequent writer on gay marriage, his articles on the subject have appeared in Newsweek, The Advocate, and Anderson Cooper 360. His July 2007 marriage to John Habich was reported in the New York Times, The London Sunday Times, Tatler, Newsweek, and numerous other publications. The wedding ceremony that he wrote for that occasion has been used as a sample text in a University of Pennsylvania Law School course on privacy and civil rights law.

He has lectured widely on a range of topics. He is a lecturer in Psychiatry at Weill-Cornell Medical College; a director of the University of Michigan Depression Center and Columbia Psychiatry; a member of the Board of Visitors of Columbia Medical School, and the Advisory Boards of the Mental Health Policy Forum at Columbia Mailman School of Public Health and the Depression and Bipolar Support Alliance. In 2008, Solomon received the Society of Biological Psychiatry’s Humanitarian Award for his contributions to the field of mental health, and in 2010, the Brain and Behavior Research Foundation’s Productive Lives Award.  In 2011, he was appointed Special Advisor on Lesbian, Gay, Bisexual, and Transgender Mental Health at the Yale School of Psychiatry.

Additionally, Solomon serves on the boards of the Metropolitan Museum of Art; the World Monuments Fund; Yaddo; and The Alex Fund, which supports the education of Romani children.  He is a member of the Library Council Steering Committee at the New York Public Library.  He is also a fellow of Berkeley College at Yale University, and a member of the New York Institute for the Humanities and the Council on Foreign Relations.

He lives with his husband and son in New York and London and is a dual national. He also has a daughter with a close friend; mother and daughter live in Fort Worth, but visit often.