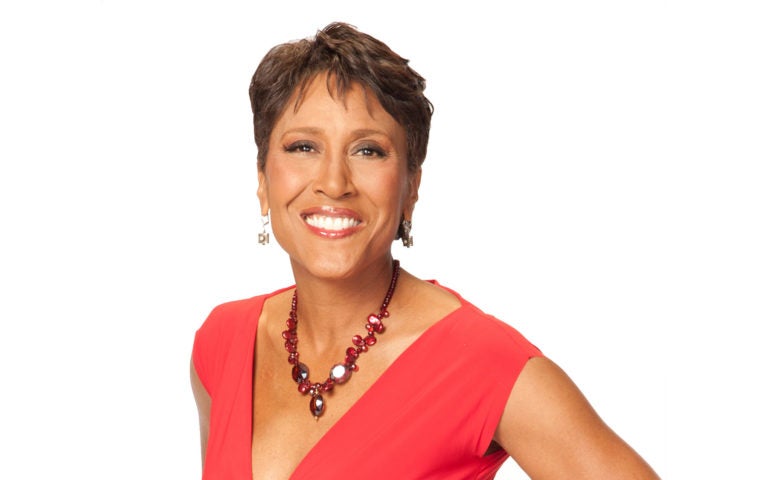 When not traveling around the world covering breaking news events, Roberts is at “GMA’s” studio in Times Square conducting interviews with a diverse group of newsmakers. Her headline-making interviews include President Barack Obama on his support of gay marriage, Facebook founder Mark Zuckerberg on the site’s new tool to save lives, First Lady Michelle Obama, the New York City hotel maid who accused IMF chief Dominique Strauss-Kahn of sexual assault, and NBA Superstar LeBron James on his announcement to play for the Miami Heat. In her role, she has conducted interviews with countless musicians, authors, athletes and celebrities.

Roberts has also done extensive reporting around the globe. She has traveled to Brussels with former Secretary of State Hillary Clinton; to the Middle East with former First Lady Laura Bush, who was on a mission to raise awareness about breast cancer in the Muslim world; to London for the historic wedding of Prince William to Catherine Middleton; to Africa with former President Bill Clinton for a first-hand look at the AIDS crisis in that part of the world; to Haiti in the wake of the devastating earthquake; and to South Africa to report on the World Cup.

In ABC News’ coverage of the 2008 presidential race, Roberts played an active role. She reported live from Washington, DC on Inauguration Day and was the first journalist to interview President Barack Obama after he was sworn in as President.

In November 2009, Roberts hosted her first “In the Spotlight with Robin Roberts: All Access Nashville” primetime special. The special took her to Nashville, where she interviewed some of country music’s biggest stars. November 2011 marked her third year hosting the popular special for the network.

In February 2009, Roberts made her red carpet debut as co-host of the ABC Television Network’s Oscar pre-show, reporting live from the 81st annual Academy Awards with fashion expert Tim Gunn. She co-hosted ABC’s Oscar pre-show again in February 2011 and reported live from the red carpet for the 85th annual Academy Awards in 2013.

Roberts was diagnosed with breast cancer in June 2007. Her courageous and public battle has been recognized with awards and honors from organizations around the country, including The Susan G. Komen Foundation, The Congressional Families Cancer Prevention Program, and Gilda’s Club, a non-profit organization founded by the late Joel Siegel.

Five years later, Roberts was faced with another health battle. In June 2012, she was diagnosed with MDS or myelodysplastic syndrome, a disease of the blood and bone marrow once known as pre-leukemia. Roberts underwent a bone marrow transplant in September of that year, her sister Sally-Ann was a perfect match. Roberts story triggered an outpouring of support from across the nation. She joined forces with Be the Match to inform the public about the need for more donors, and since her diagnosis over 56,000 people have joined the registry. Roberts made a triumphant return to the anchor desk on February 20, 2013, five months to the day since she underwent the transplant.

In August 2005, Roberts found her personal and professional lives collide when Hurricane Katrina devastated the city of New Orleans and the Mississippi Gulf Coast – a part of the country Roberts called home for most of her life. In the days following, she traveled to the hurricane zone and reported live amid the devastation of the storm. She also launched “GMA” Gets It Done,” a year-long effort to rebuild her hometown of Pass Christian, Mississippi. She has returned to the Gulf Coast numerous times in the ensuing years to update viewers on how residents and businesses in the region are recovering post-Katrina.

Roberts was named co-anchor of “Good Moring America” in May 2005. She began contributing to the morning program in June 1995 and has worked in broadcasting for more than 20 years.

From 1990 to 2005, Roberts was a contributor to ESPN, where she was one of the network’s most versatile commentators. Her assignments there included hosting “SportsCenter” and contributing to “NFL PrimeTime.” She began hosting “In the Game with Robin Roberts” in May, 2012, an eight episode program with Roberts carrying on intimate conversations with groundbreaking women and men in sports. The program is featured on ESPN’s Sports Center, espnW.com, and ABCNews.com.

Prior to her work at ESPN, Roberts was a sports reporter and anchor at WAGA-TV in Atlanta. She was also a morning personality on WVEE-FM, Atlanta’s top-rated morning show. From 1986 to 1988, she served as sports anchor and reporter for WSMV-TV in Nashville, TN where she won the “Nashville Scene” Sportscaster of the Year Award in 1987. She also worked as a sports anchor and reporter at WLOX-TV in Biloxi, MS from 1984 to 1986 and WDAM-TV in Hattiesburg, MS from 1983 to 1984.

Roberts began her broadcasting career while in college at WHMD/WFPR Radio in Hammond, LA, where she was the sports director. She also served as a special assignment sports reporter for KSLU-FM in 1982.

In 2001, Roberts was named a “Louisiana Legend” by Louisiana Public Broadcasting. She was also named to the 1999 FIFA Women’s World Cup Advisory Board in January 1998, a board that includes Henry Kissinger, William Simon, Christine Whitman and Lamar Hunt. In 1994 she was inducted in the Women’s Institute on Sport and the Education Foundation’s Hall of Fame. Additionally, Roberts was recognized with the Arthur Ashe Courage Award at the ESPY’s in July 2013 for the strength and courage she has displayed throughout her life and career. She is also active as a speaker for charity and civic functions.

In March 2007, Roberts’ first book, From the Heart: 7 Rules to Live By, was published by Hyperion. An updated version of the book, including an additional chapter on her battle with breast cancer, was released in 2008.  In April 2012, Roberts collaborated with her mother Lucimarian Tolliver Roberts in “My Story, My Song: Mother-Daughter Reflections on Life and Faith” published by Upper Room Books. Co-written with Missy Buchanan, the book features pivotal moments in her mother’s life demonstrating how faith has provided strength and hope to face life’s challenges. In a new memoir to be published in April 2014, Roberts will tell the amazing story of her courageous battle against a life-threatening illness, the life lessons she continues to learn, and her inspiring return to the GMA anchor desk.

Roberts is a native of the Mississippi Gulf Coast and currently resides in New York City. Follow Robin on Twitter: @RobinRoberts