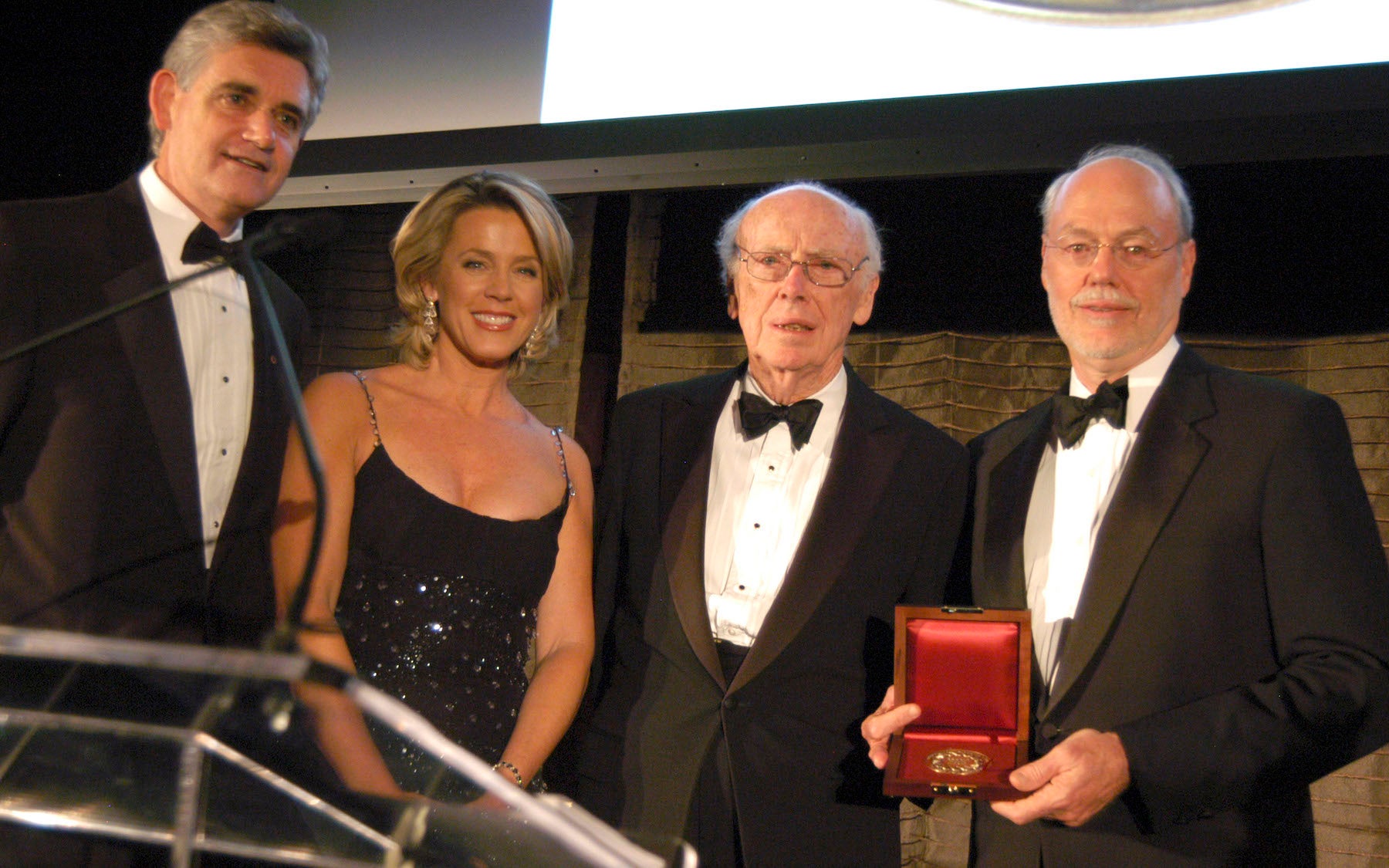 The campaign was cited at CSHL’s inaugural Double Helix Medals Dinner tonight at the Mandarin Oriental New York. The black-tie gala honored boxing legend and humanitarian Muhammad Ali; Bob Wright, chairman and CEO of NBC Universal, and his wife Suzanne; and Nobel laureate Dr. Phillip Sharp of MIT. The double helix refers to the unique structure of DNA molecule, which carries all of life’s information. It is central to biological research, and is at the heart of the CSHL’s work.

Mr. Ali was honored for his public campaign against Parkinson’s disease. The Wrights, founders of Autism Speaks, were cited for their important work in bringing a national spotlight to autism. Dr. Sharp was saluted for his lifelong contributions to biomedical research which have led to a greater understanding of cancer and genetic diseases.

The dinner was chaired by Jeff Zucker, CEO of NBC Universal Television Group, and his wife Caryn; Thomas Quick, retired vice chairman of Quick & Reilly/Fleet Securities, Inc., and a Trustee of CSHL; David Rubenstein, a CSHL Trustee who is co-founder and managing director of The Carlyle Group, and his wife Alice; and Roy Zuckerberg, a CSHL Trustee and senior director of Goldman Sachs.

Some $2.5 million was raised at the dinner to benefit CSHL’s groundbreaking biomedical research, innovative technologies and educational initiatives seeking to understand and identify therapeutic approaches and cures for devastating diseases such as cancer, autism, schizophrenia, Alzheimer’s and Parkinson’s, among others.

“Cold Spring Harbor Laboratory has long been recognized for its excellence in research in the biological and biomedical sciences,” said Dr. Bruce Stillman, president. “Our $200 million capital campaign will enable us to expand our stellar research and continue to teach the next generation of scientists.”

Added Dr. Watson: “Never before has biology and medicine had the capacity to move so rapidly. I excitingly look forward to keeping Cold Spring Harbor Laboratory in its long valued leadership role.”

CSHL has already raised $130 million in the silent phase of the capital campaign. It is customary for institutions to have about one-third to one-half of the campaign completed before making a public announcement.

“Cold Spring Harbor Laboratory’s work in determining the causes of diseases like cancer through the study of genetics is second to none,” said David H. Koch, a former trustee of the Laboratory who has been a generous supporter of biomathematics at the Laboratory. “I am proud to have my name affiliated with an institution that has made, and will continue to make, important discoveries in the treatment of genetic diseases through outstanding biomedical research.”

“It gives me a great sense of pride to help Cold Spring Harbor Laboratory expand its facilities for groundbreaking research in Parkinson’s, Alzheimer’s, autism and schizophrenia,” said Donald Everett Axinn, who has made a contribution toward research on cognitive disorders.

CSHL was founded in 1890 as a biological field station for the Brooklyn Institute of Arts & Sciences, and was one of the first institutions in the world to specialize in genetics research. Today, more than 330 scientists focus on research into:

In addition to its research, CSHL maintains a number of renowned educational programs, including The Watson School of Biological Sciences Doctoral Programs and The DNA Learning Center, the world’s first public center for genetics education for students, science teachers and the general public.

Thomson ISI, a scientific performance evaluator, recently ranked the Laboratory #1 for cited research in molecular biology and genetics (ahead of such vaunted institutions as MIT, Stanford, Harvard, the Salk Institute, Rockefeller University, and University of California-San Francisco). The Laboratory’s Cancer Center has been ranked one of the top in the country by the National Cancer Institute.