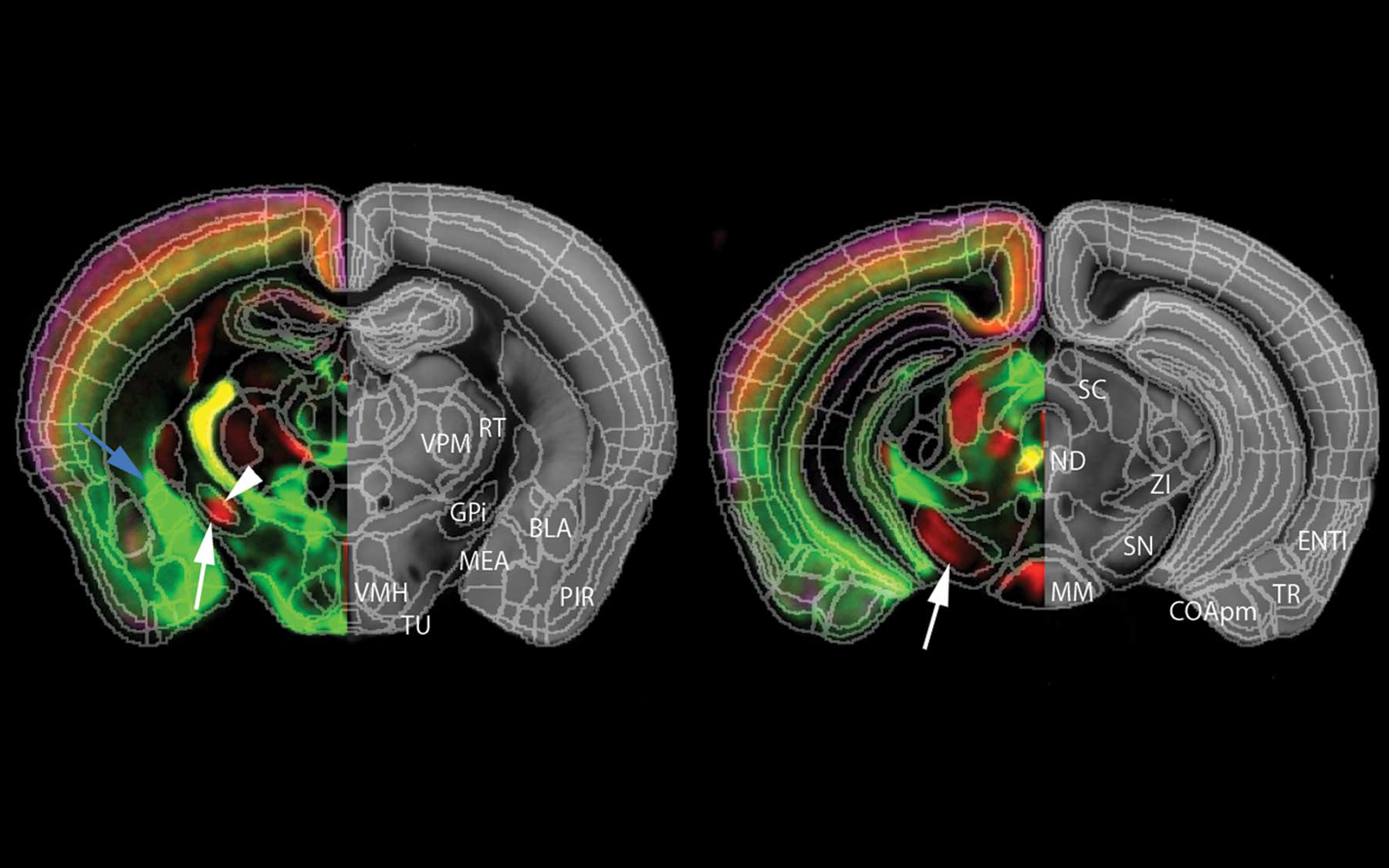 The announcement of several important government grants and the formation of a new international research initiative served to highlight the centrality of neuroscientists at Cold Spring Harbor Laboratory in one of science’s hottest fields: brain research.

The research funded by these grants will be led by two CSHL neuroscientists, Professor Z. Josh Huang (the Center) and Associate Professor Pavel Osten (the Collaboratory). Other CSHL neuroscientists, including Professors Anthony Zador and Partha Mitra and Associate Professors Jesse Gillis and Florin Albeanu are core leaders and/or co-investigators on the grants. The grants are among 110 new awards totaling $169 million announced by NIH yesterday for BRAIN project research.

Meanwhile, Zador and Associate Professor Anne Churchland recently were among leading neuroscientists involved in the launch of another important research initiative. On September 19, The International Brain Lab (IBL) was announced. A consortium formed by 21 neuroscience laboratories in the US and Europe, IBL investigators seek to develop theories of how the brain works by focusing on a single behavior shared by all animals: foraging. The Wellcome Trust in London and the Simons Foundation in New York City have together committed more than $13 million over five years to kick-start the IBL.

The Human Cell Atlas, a project of the Chan Zuckerberg Initiative, also announced a series of funding awards this past week. Among the recipients is CSHL’s Zador, who will collaborate with scientists at 11 other institutions to develop methods of reading neuronal transcripts—messages copied from genes as they are expressed by cells in the brain, a powerful indicator of cell type and function.

“Cold Spring Harbor Laboratory is proud to be playing such an important and central role in the international BRAIN Initiative research that promises to rapidly advance our understanding of how the brain works,” said Dr. Bruce Stillman, CSHL’s President and CEO. “This is one of biology’s grand challenges. We are privileged to be at the center of this important initiative as well as the IBL, and involved in the Chan Zuckerberg Initiative, at a moment when advances in technology make possible truly large steps forward.”

The projects led by Huang and Osten respond to an objective of the BRAIN Initiative to create a Brain Initiative Cell-Census Network (BICCN). Researchers will do this, Huang says, by “integrating molecular, anatomic, imaging and computational technologies to build a broad Whole-Brain Cell Transcriptome Atlas and a high-resolution Forebrain Projection Neuron Atlas.” The former will provide an overview of the cell diversity and composition within the mouse brain. It will be integrated with the latter atlas, which will combine comprehensive and in-depth anatomic and molecular characterization of forebrain projection neurons.

Osten’s project involves the use of a platform of standardized and largely automated methods developed in his lab to generate a comprehensive and quantitative anatomical atlas of over 100 molecularly defined brain cell classes and types in both the female and male mouse brain. This work will establish a structural basis for building what Osten calls an integrated Cell Type Brain Atlas.

Osten notes that “Initial studies applying our quantitative whole-brain analyses have already revealed unexpected surprises in brain structure, including cortical region-specific differences in cell type ratios and new gender-based differences in cellular anatomy. Our methods can now be applied to the analysis of human brains, a work that we initiated in collaboration with Dr. Zsofia Magloczky at Hungarian Academy of Sciences, Budapest. Being able to directly compare brain organization at the level of cell types in mice, other animals, and humans promise to reveal new information on how the mammalian brain was built by evolution for different functions and computations.”

The Center and Collaboratory for the Mouse Brain Cell Atlas includes 18 investigators at nine institutions: CSHL, Harvard, MIT-Broad Institute, University of Southern California, Rockefeller University, Princeton University, California Institute of Technology, Allen Institute for Brain Science, and Huazhong University of Science and Technology in China. The two efforts will receive a combined $17+ million in annual funding for five years. Mitra and Zador will lead different “cores” of the project – Zador, the technology core and Mitra the data core. A separate BRAIN grant awarded to Zador enables him to continue to perfect methods developed by his lab to use high-throughput DNA sequencing to map neuronal circuitry. A preliminary version of this MapSeq technology was introduced last year.

The data core led by Mitra will maintain a unified web portal based at CSHL, extending the existing portal of the Mouse Brain Architecture Project (http://mouse.brainarchitecture.org) and combining with a portal for single neuron transcriptome data at the Broad Institute (MIT). The data core will leverage existing infrastructure to store, manage, analyze and present project data on the web, and also interface with the main data center for the NIH-funded consortium, according to Mitra. “The data volumes are substantial—we anticipate over 5 petavoxels of brain image data and hundreds of terabytes of RNAseq data over the period of the grant. Thus our effort requires combining experts with computational and biological capabilities in different areas into an integrated team. We have assembled such a team,” Mitra says.

The IBL, which in addition to Zador and Churchland includes among its participating investigators former CSHL faculty members Karel Svoboda and Zachary Mainen, addresses a major challenge on the behavioral side of neuroscience research. In seeking to grasp the neurological bases of behavior, different labs have developed research procedures and methods that often yield results that are difficult for others to replicate—the acid test of successful science. IBL seeks to develop experimental models that will help ensure that participants are generating data that are useful to the broader research community. Churchland says different labs will tackle different aspects of the problem, but all will share in the methods developed and in the data that is collected.

The announcement of several important government grants and the formation of a new international research initiative served to highlight the centrality of neuroscientists at Cold Spring Harbor Laboratory in one of science’s hottest fields: brain research.