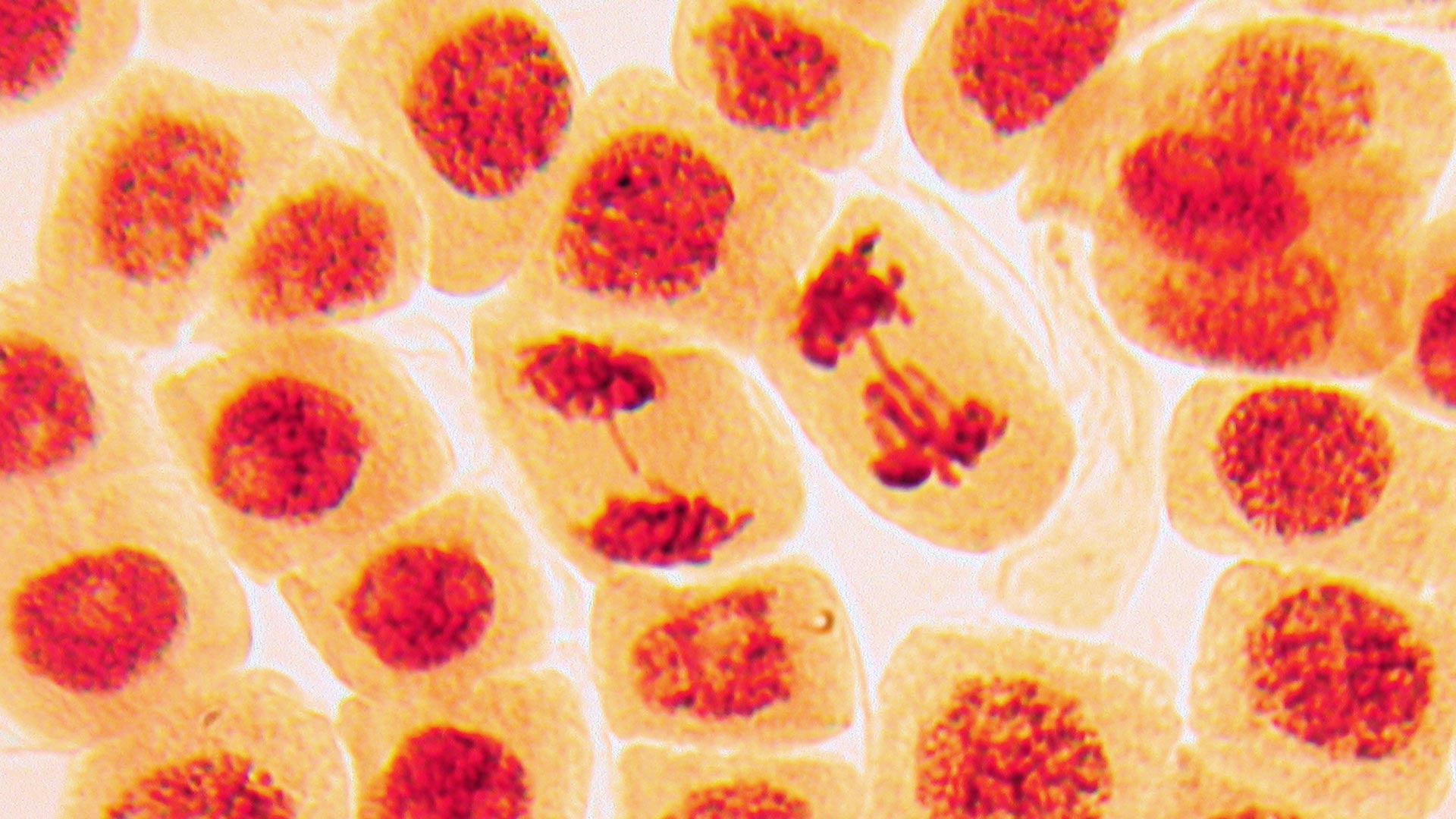 The origin recognition complex (ORC) is a group of proteins involved with every cell division event in our cells. Researchers have visualized the structure of this complex, dissected its mechanisms in starting DNA replication, and discovered other roles the ORC plays. Mutations in the genes that encode these proteins can result in disease.

Stretching out the DNA in all 46 chromosomes packed into one human cell would make a string of DNA two meters long. Accurately replicating all that DNA is vital to survival; cells must control this process with tremendous precision in time and space. Origin recognition complexes (ORCs) initiate the task of DNA replication throughout an entire genome in a controlled, temporal pattern. In the mammalian genome, this group of proteins assembles at tens of thousands of sites all at once, ensuring each chromosome is copied precisely once per cell division. Cold Spring Harbor Laboratory (CSHL) President and CEO Bruce Stillman and other CSHL scientists have been working for decades to understand the intricacies of ORC, DNA replication, and cell division.

In the 1980s, researchers who wanted to understand DNA replication in animals used viruses as a simplified model system. At CSHL, Stillman worked with a simian tumor virus—SV40—that could cause tumors when introduced into rodents. The SV40 T-antigen, the first protein the virus makes inside a host cell, is needed for the very first step of replication of the virus DNA. T-antigen hijacks other proteins from the infected cell to replicate the virus genome. Over the next few decades researchers would use SV40 replication to discover dozens of cellular proteins that are necessary for human cell genome replication. The Stillman lab searched for the protein(s) that start cell chromosome duplication, rather than virus genome replication. They discovered and named this protein ORC.

Scientists have figured out the structure of ORCs in several species. Stillman’s collaborator, CSHL Professor and HHMI Investigator Leemor Joshua-Tor visualized the human ORC complex using X-ray crystallography and cryo-electron microscopy (cryo-EM). The human ORC consists of six proteins when fully assembled into a ring around a stretch of DNA. Parts of the ORC twist and pinch dramatically, changing shape as it assembles around the DNA. While a yeast ORC can be found mostly in one stable form, ORC from insects (fruit flies) and humans can shift between one form and another. Additionally, the human ORC has dynamic regions not seen in single-celled yeast. The dynamic regions are most likely essential for regulating and coordinating cell division in a multicellular organism.

When to start replication

The ORC complex proteins are kept near each other in liquid compartments in the nucleus and recruit proteins such as CDC6 and other proteins that control when to commit the cell to divide. When the ORC1 protein binds to DNA, it recruits CDC6, a protein that regulates and recruits other proteins, to a liquid phase and completes the ORC ring. Completing the ring triggers is an essential step in the process of beginning DNA replication.

Tightly-controlled feedback loops between ORC1, CDC6, and a number of other molecules regulate the timing of replication. Tens of thousands of ORCs assemble simultaneously along the chromosomes and after assembly, they are sequentially employed to start replication.

ORC1 and the centrosome

Not only are ORC proteins involved in DNA replication, but they also help divide the chromosomes equally into the two new cells. Centrosomes are the intracellular organelles (specialized parts of the cell) that build little cables that pull the chromosomes apart into two new daughter cells. Stillman’s laboratory found that ORC1 controls the number of centrosomes in a cell, making sure there are two (and only two) to pull the copied chromosomes apart during cell division. The scientists think that ORC1 does this additional job by moving to the centrosomes sometime during the cell division cycle.

Recognition of the importance of ORC

Stillman’s lab has come a long way from studying viruses and yeast to picking apart the mechanisms of human cancers. For example, his group found when CDC6 and Cyclin E are over-expressed or ORC1 is under-expressed, the cell prepares to divide again and again, bypassing checkpoints. This can give rise to genome damage and eventually cancerous growth. Orc1 mutations can cause cellular dysfunctions that contribute directly to a syndrome characterized by people with severe dwarfism, small brain size, and other abnormalities.

Stillman has received a number of prestigious awards for his groundbreaking work with ORC and DNA replication: the 2010 Louisa Gross Horowitz Prize, the 2020 Dr. H.P. Heineken Prize for Biochemistry and Biophysics, the 2019 Canada Gairdner International Award, the 2004 Alfred P. Sloan, Jr. Prize, and the 2014 Herbert Tabor Research Award.

Life would be impossible if dividing cells replicated their DNA with anything less than near-perfect precision. It is important to pass on DNA accurately without generating errors that can lead to cancer and other disorders.

The origin recognition complex (ORC) is a group of proteins involved with every cell division event in our cells. Researchers have visualized the structure of this complex, dissected its mechanisms in starting DNA replication, and discovered other roles the ORC plays. Mutations in the genes that encode these proteins can result in disease.