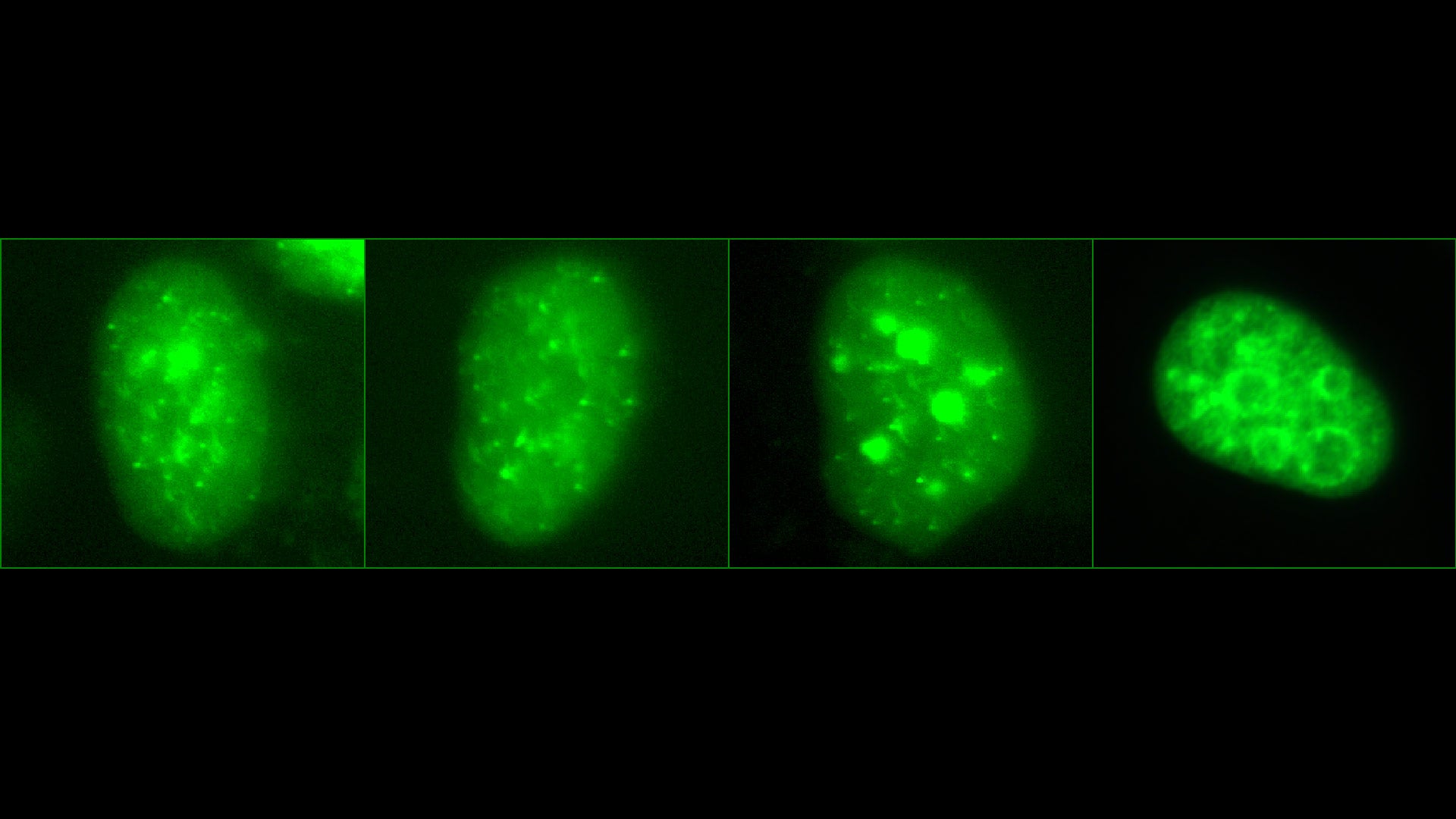 The Origin Recognition Complex (ORC) is a group of proteins required to be fully assembled for the first step in DNA replication. One component of the ORC, ORC1 (visible in this image as bright green dots), is sequestered into droplets in the nucleus of the cell, and allowed to move briefly and assemble with other proteins at the right moment in the cell cycle. Image: Manzar Hossain/Stillman lab.
email envelop icontwitter icon share buttonfacebook icon share buttonlinkedin icon share button

The first step in DNA replication requires the assembly of a group of proteins called the Origin Recognition Complex (ORC). CSHL President and CEO Bruce Stillman and colleagues have determined how the ORC assembles at the right time during the cell division cycle. One part of the complex is sequestered into small liquid bubbles when the cell commits to duplicating its genome. The ORC complex binds to DNA sites throughout the genome and recruits proteins needed to start replication.

Cold Spring Harbor Laboratory (CSHL) President and CEO Bruce Stillman has been dissecting DNA replication, a critical step in cell division, since the 1980s. His lab studies how Origin Recognition Complexes—ORCs—coordinate DNA duplication. They discovered how our cells assemble and disassemble ORCs during the cell division cycle. One ORC protein is sequestered into small liquid droplets, keeping it apart until the right time to recruit other proteins and initiate DNA replication.

The ORC recognizes where to initiate replication at numerous locations along the long, linear stretches of DNA in our cells’ chromosomes. Fully assembled ORCs recruit other proteins to make precise copies of the chromosomes. This mechanism is necessary to inherit DNA accurately without errors that can lead to disorders such as cancer.

Scientists have studied the structure of ORCs in several species. Stillman explains:

“We’ve previously studied this in baker’s yeast, but it turns out that human cells have a different way of doing things.”

Unlike single-celled yeast, humans have a variety of cells that divide at different times. To choreograph this, the researchers found that one human ORC protein, ORC1, has certain regions that yeast ORC1 lacks. When ORC binds to DNA, ORC1 recruits CDC6, a protein that assembles other DNA replication proteins with itself. Some of the human-specific regions of ORC1 and CDC6 bind other proteins that regulate DNA replication. Manzar Hossain, a research investigator in Stillman’s lab, says:

“We found that ORC1 and CDC6 interact in a very tangential manner. We found a very short time period which allows them to interact.”

DNA-bound ORC1 is sequestered into liquid droplets that briefly change shape, then brings in CDC6. Kuhulika Bhalla, a postdoc in Stillman’s lab, explains:

“So if you can imagine a lava lamp, like you’ve got liquid, but you’ve got other colored liquid within it. And they still managed to stay separated.”

Throughout most of the cell division cycle, ORC1 and CDC6 amounts oscillate in the cell. Stillman explains that “both high and low amounts of ORC1 lead to severe consequences for cell viability. So, you have to have just the right amount” of each protein throughout the cell cycle. Stillman and his colleagues have shown that CDC6 recruits other regulatory proteins that control the activity and levels of ORC1 in both space and time. They published their findings in Molecular Cell.

The first step in DNA replication requires the assembly of a group of proteins called the Origin Recognition Complex (ORC). CSHL President and CEO Bruce Stillman and colleagues have determined how the ORC assembles at the right time during the cell division cycle. One part of the complex is sequestered into small liquid bubbles when the cell commits to duplicating its genome. The ORC complex binds to DNA sites throughout the genome and recruits proteins needed to start replication. 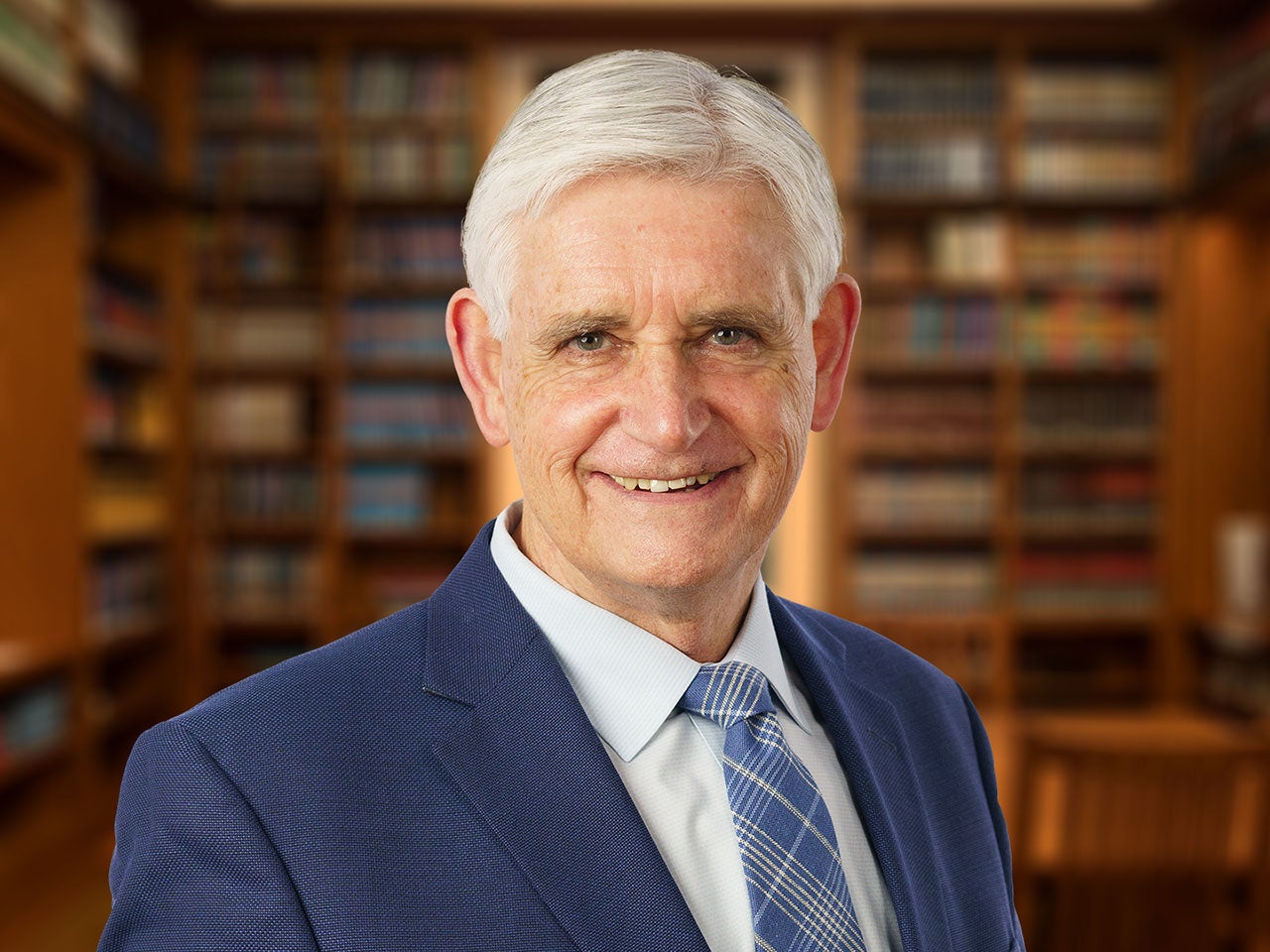