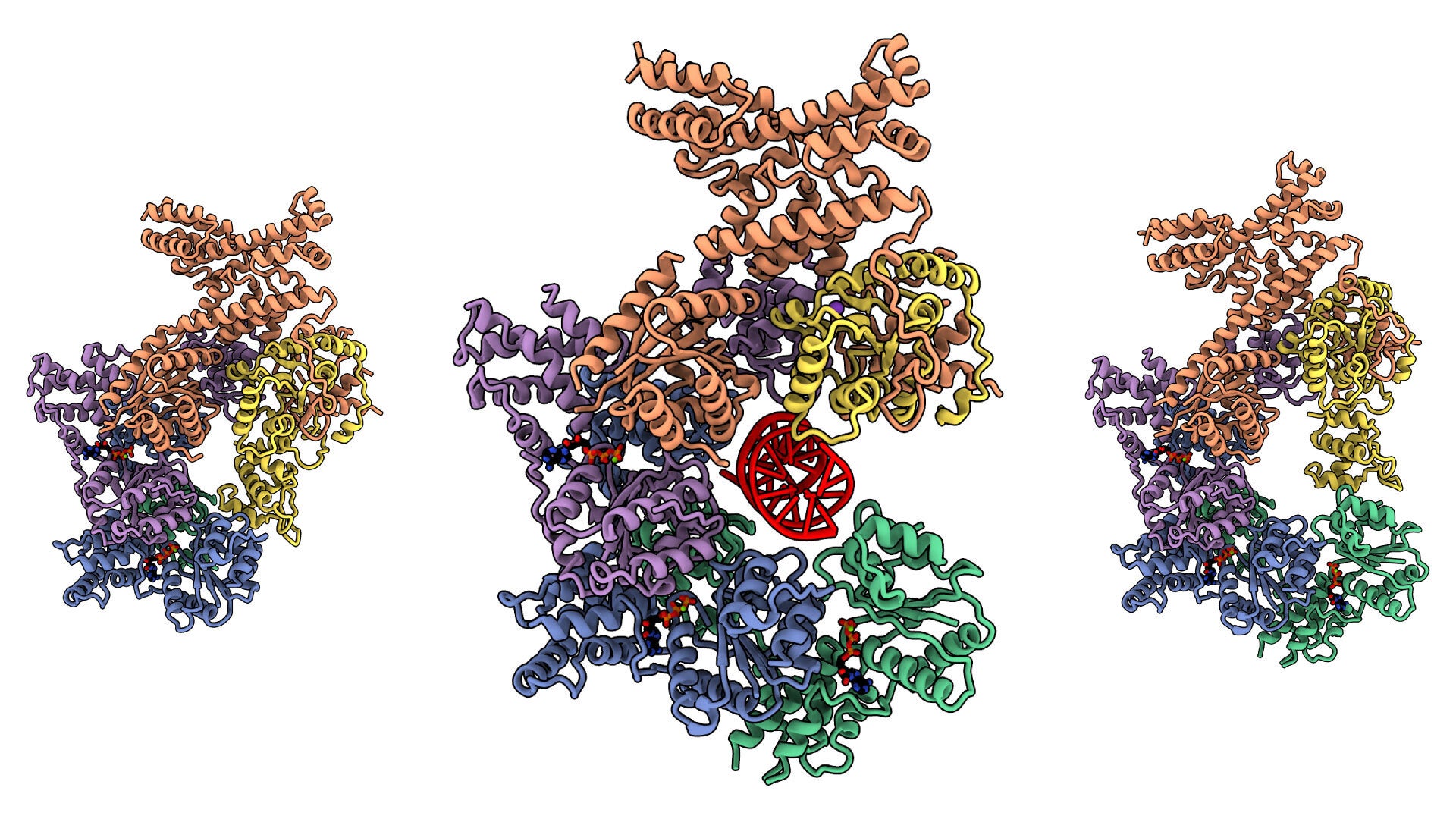 The Origin Recognition Complex (ORC) is a structure that binds to DNA and starts the genome duplication process as a cell gets ready to divide. In this model of human ORC, the almost donut-shaped complex clamps down on DNA (the twisted helix shown in red in the central model). The model on the left shows the complex covered, protecting the DNA binding cavity. The model on the right shows the complex open, empty of DNA. Image: Joshua-Tor lab.
email envelop icontwitter icon share buttonfacebook icon share buttonlinkedin icon share button

DNA replication begins with a set of proteins—the Origin Recognition Complex (ORC). Cold Spring Harbor Laboratory (CSHL) researchers published images of the human ORC in exquisite detail, showing how it changes shapes in dramatic ways as it assembles around DNA.

The most basic activity of a living thing is to turn one copy of its genome into two copies, crafting one cell into two. That replication event begins with a set of proteins—the Origin Recognition Complex (ORC). And, with some cancers and developmental diseases linked to ORC proteins, structural biologists need to see how the complex works so they can understand how it might go wrong. Cold Spring Harbor Laboratory (CSHL) Professor & HHMI Investigator Leemor Joshua-Tor and colleagues published images of the human ORC in exquisite detail in eLife, showing how it changes shapes in dramatic ways as it assembles around DNA.

The Origin Recognition Complex (ORC) is a key piece of cellular machinery, fundamental to life, yet so far mysterious. This video shows the shape of the ORC in 3D with and without DNA. One clip shows how the ORC twists and pinches. ORC2 can swing around the other proteins to cover the cavity where DNA binds. Some shapes can form an energy processing structure; the researchers think that energy is required to shift some subunits into other forms. The scientists speculate that at least some of these movements are critical for the ORC to initiate replication or for it to be ejected from the origin site once the rest of the replication machinery arrives. The images and video clips were made using Cryosparc 2 and UCSF ChimeraX software. Images/videos: Matt Jaremko/CSHL Joshua-Tor lab

The scientists think the first piece of the complex—ORC1—finds the stretch of DNA where replication is supposed to begin and assembles the rest of the ORC (subunits 2–5) at that spot. Though, in yeast, a single sequence of DNA peppered throughout the genome spells out “start,” there are no such simple signposts for the 30,000 start sites in humans. Our start signals are mysterious. Joshua-Tor says:

“When the cell has to duplicate, the first thing that has to happen is that the genome has to duplicate. And so the positioning of ORC on these so-called “start” sites is really the first event that has to happen in order to start the duplication of the genome. You know in bacteria, there’s usually one start site because it’s a small genome, but in larger organisms like humans, in order to be able to replicate such a large genome, what the cell does is uses many, many start sites. And the interesting thing in mammalian systems is that we actually don’t understand what a start site really looks like.”

To complicate things further, earlier on, as researchers looked at different organisms, they found differently shaped ORCs. But Joshua-Tor and colleagues found an explanation for those varying shapes. Parts of the ORC twist and pinch in dramatic ways, depending on what they are doing at the moment. A yeast ORC freezes mostly into one stable shape and a fly ORC into another. According to Kin On, a CSHL staff scientist, “the yeast complex is so stable, it is rock solid. But the human ORC assembly is very dynamic.” Using cryo-electron microscopy (cryo-EM), sample preparation, and computer analysis techniques, the group was able to catch the human enzyme complex in many different shapes, including one that looks like a fly ORC and another that looks like yeast ORC. They assembled a series of images into a movie showing a wide range of motions. They even caught the first snapshot of a human ORC straddling a DNA molecule, which is key to understanding how ORCs do their jobs. According to Matt Jaremko, a postdoctoral fellow in Joshua-Tor’s lab, “ORC is flexible, which helps the protein interact with DNA.”

The ORC was discovered at CSHL in 1992 by CSHL President and CEO Bruce Stillman, a collaborator of Joshua-Tor’s on this study.

Though a better understanding of ORCs may point to better treatments for cancer and developmental syndromes, Joshua-Tor says there is another reason to want to learn what we can about these beautiful cellular machines:

“How we duplicate our genome is the most basic process of life, right? Really that’s what life is all about. So, regardless of how we understand cancer and this developmental syndrome, you know, understanding ourselves and understanding the most basic process, that is part of the human endeavor really to understand ourselves. So it’s not all about the utility of it. It’s really, y’know, one of the basic endeavors of, of humanity is trying to understand life and ourselves. I think it’s a big part of why we’re doing it. At least a big part of why I’m doing it.”

The National Institutes of Health and Howard Hughes Medical Institute.

DNA replication begins with a set of proteins—the Origin Recognition Complex (ORC). Cold Spring Harbor Laboratory (CSHL) researchers published images of the human ORC in exquisite detail, showing how it changes shapes in dramatic ways as it assembles around DNA.