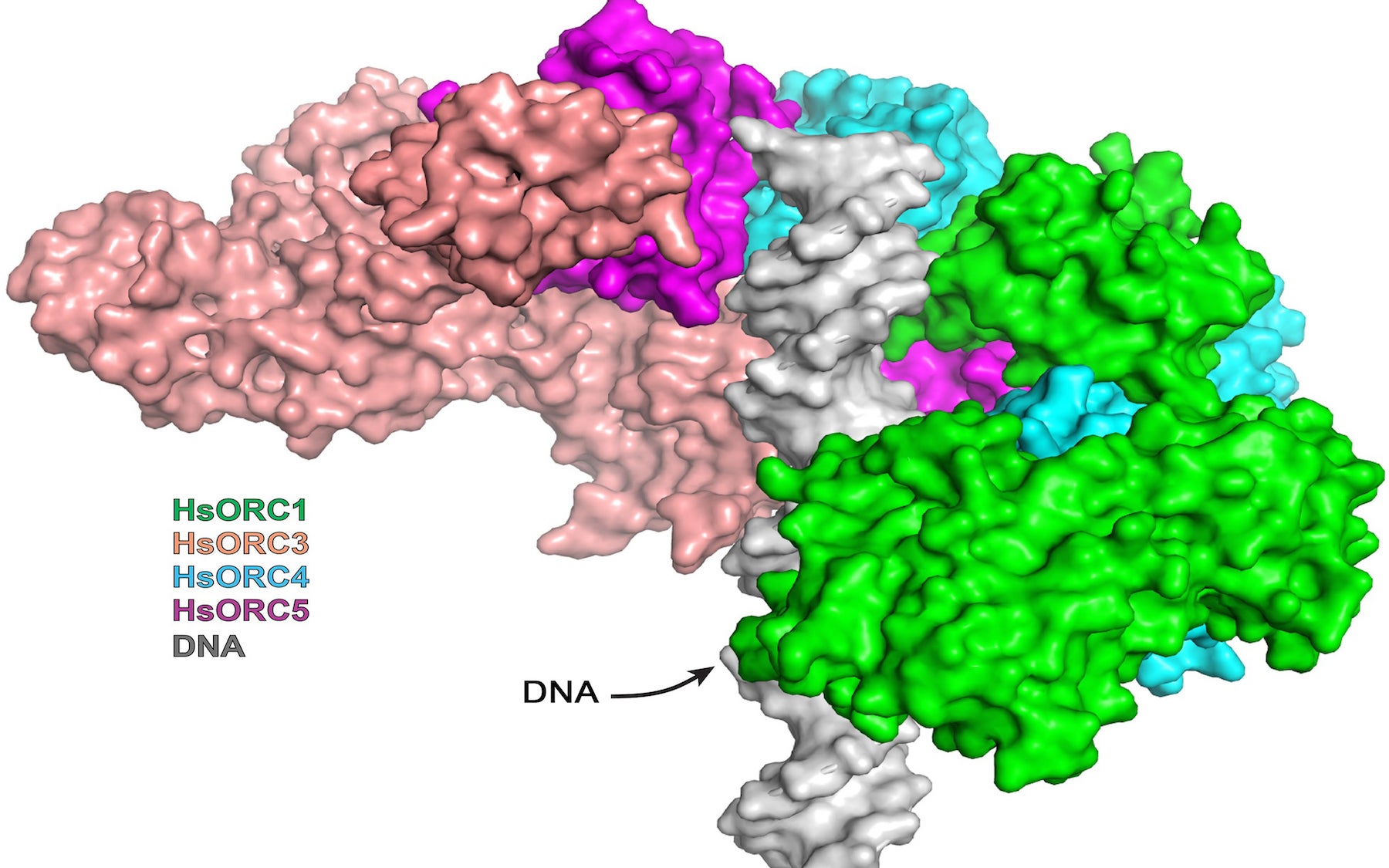 Pictures at atomic resolution show the very first step in the genome-replication dance. The images of the human version of the protein complex called ORC answer questions about how it works and suggest how ORC mutations cause human disease.

Cold Spring Harbor, NY — It’s a good thing we don’t have to think about putting all the necessary pieces in place when one of our trillions of cells needs to duplicate its DNA and then divide to produce identical daughter cells.

We’d never be able to get it right. The process is so complex, calling for the orchestration of over a hundred highly specialized proteins, each of which must play its part at precisely the right moment and in the proper spatial orientation. It has often been compared to an exquisitely choreographed molecular dance. The smallest errors, left uncorrected, can have deadly consequences. It is essential that the genome replicates once and only once during each cell-division cycle.

In the journal eLife, a team of biologists co-led by Cold Spring Harbor Laboratory (CSHL) Professor and HHMI Investigator Leemor Joshua-Tor and CSHL President and Professor Bruce Stillman has published pictures at atomic resolution of the multi-part protein complex that performs the very first step in the genome-replication dance. The images of the human version of this complex, called ORC—for origin recognition complex—show it in its active mode.

ORC complexes self-assemble in the cell nucleus and bind at specific spots called start sites or origins along the double helix in chromosomes. In human cells, ORC assembles at literally thousands of origin sites across the entire genome, to form an initial configuration called the pre-replication complex, or pre-RC. Once assembled, these pre-RCs are like highly prepared Olympic swimmers standing on the starting block, waiting for the signal to start the race.

Like fast swimmers, each complex needs fuel—in ORC, to recruit its “motor” that opens the two strands of the double helix. ORC’s fuel is ATP, or adenosine triphosphate. In ORC’s active phase, the researchers showed that a subassembly containing ORC subunits 1,2,3,4 and 5 engages multiple ATP molecules and forms a partial ring-shaped complex. ATP is also used to recruit another protein component called CDC6, transforming the open ring into a closed ring. By this time, the multi-part assembly has engaged and bound to the double helix, which passes through the center of the ring like a bolt through the center of a nut. The ring is designed to fit the DNA snugly.

ORC was discovered in 1991 in Stillman’s lab. “Bruce made his initial discovery of ORC in yeast,” notes Joshua-Tor, “and we’ve known for many years that there are great structural similarities in the ORC complex across vastly different organisms, from yeast to flies to mammals. Our new pictures help account for what appeared to be differences in shape between ORC in fruit flies and in humans.”

Using the tools of structural biology—x-ray crystallography and cryo-electron microscopy (cryo-EM)—the team showed that the differences are analogous to the differences between a person pictured standing still and one pictured running. The best fly ORC structure had been captured in an inactive phase, while the newly published structure captures the complex in human cells in the configuration it assumes when performing its function—binding to DNA.

Early pictures of ORC were low-resolution and “blobby,” says Joshua-Tor. The new images make clear how ATP binds at positions in one major part of the ORC assembly, consisting of protein subunits called ORC1, ORC4 and ORC5. This is ORC’s “motor module,” and could not be stabilized for imaging without ATP “on board.” The other major assembly consists of ORC2 and ORC3. ORC attains its ring-shaped configuration when CDC6 protein is recruited, sliding in between the ORC1 and ORC2 subunits.

High-resolution images of the active human ORC published by the team help solve three major mysteries. “They help us understand how DNA might bind with ORC; how the ATP fuel is used; and how mutations in proteins in the ORC complex give rise to human disease,” says Joshua-Tor.

One interesting disorder known to be caused by ORC-complex mutations is called Meier-Gorlin Syndrome, which entails severe dwarfism (short stature) and microcephaly (small brain). The team produced ORC that has various of its component proteins containing mutations found in Meier-Gorlin patients. “We found that one of these mutations kills ATP activity completely,” Joshua-Tor reports, thus impairing ORC in its genome replication role. Children with this mutation have one good copy and one defective copy, essentially yielding half of the needed ORC, resulting in their small body and brain size. Another mutation rendered the ORC 1,4,5 motor module overactive, but when the module was added to ORC 2,3 it made the full complex less active than normal. These structural details help explain why Meier-Gorlin Syndrome occurs. Proper functioning of ORC is important in avoiding many other illnesses, including cancer.

Perhaps the broadest insights afforded by the new human ORC pictures are evolutionary. Although ORC in primitive yeast and complex human beings operates differently—the yeast protein is stable during cell division while in humans it is dynamically assembled and taken apart—they are “remarkably similar” in important respects, the researchers note.

“Both are highly similar to another ATP-driven machine that also loads a ring-shaped protein onto DNA, the DNA polymerase clamp-loaders, showing that these molecular machines that load ring-shaped proteins onto DNA have been re-purposed for multiple stages of DNA replication,” the team writes. They both act as molecular switches that hydrolyze the energy of ATP to lock protein rings on double-stranded DNA.

“Structure of the active form of human origin recognition complex and its ATPase motor module” is published in eLife. The authors are: Ante Tocilj, Kin Fan On, Zuanning Yuan, Jingchuan Sun, Elad Elkayam, Huilin Li, Bruce Stillman and Leemor Joshua-Tor. The paper can be obtained at: https://elifesciences.org/content/6/e20818

Pictures at atomic resolution show the very first step in the genome-replication dance. The images of the human version of the protein complex called ORC answer questions about how it works and suggest how ORC mutations cause human disease.