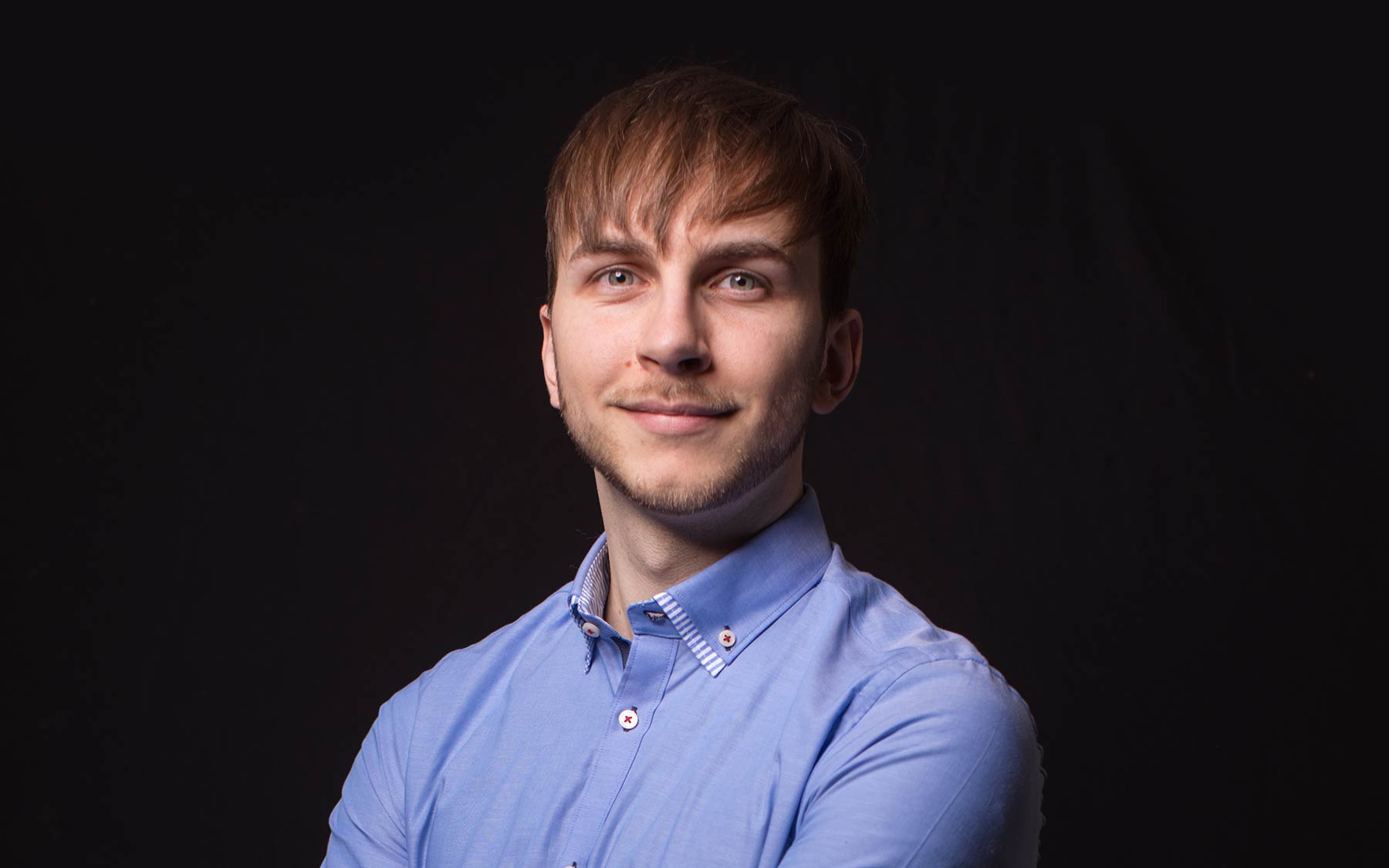 This is the fourth in our series of Watson School student profiles.

For many physicists, the big challenge is dark matter. Dark matter is thought to make up the large majority of mass in our universe, but it can’t be seen. Physicists know about dark matter from its effects on visible matter or radiation. But detecting these effects requires extremely sophisticated, highly sensitive equipment. And for that reason, experimental efforts to study dark matter are huge international collaborations involving hundreds of scientists. At Syracuse University, Daniel Kepple had the opportunity to contribute to the field. Even though he had a great mentor, something was missing. “When working on a collaboration that involves hundreds or even thousands of different people,” Daniel says, “you are just like one of many hands on a Ouija board. Each hand’s contribution is essential, but the overall direction of the project might be very different from the direction you are pushing. In biology, I get to work on something intimately related to the scientific questions that interest me.”

Many scientific revelations are brought about by the combined efforts of scientists from multiple disciplines. This is why the Watson School of Biological Sciences encourages students with non-biology academic backgrounds to come to the program. The big questions in biology and medicine today need input from many areas of science—such as physics. And students trained in math, engineering, or physics may find exciting challenges in the problems presented by biological systems. The first complication comes, though, when non-biologists get bombarded with PCR, epistasis, splicing, and the jargon of biology. For the entire Watson School Fall Term, the non-biologists are pointed to by their classmates when instructors inevitably ask, “So, does anyone not know what an enhancer is?”

Daniel, who is now a second-year student in the Watson School, got pointed to quite a bit last year. During his time at Syracuse, in addition to his efforts on the vacuum pump for the dark matter detector, he worked on the plasmonic properties of silver nanoparticle backreflectors for thin film solar cells, the electrophysiology of nanopore proteins, and, with a professor at Harvard, how the physical characteristics of the mitotic spindle might impact fitness in the nematode C. elegans. This last project provided Daniel his first real research experience with a complex biological system. It was enough to inspire him to give up dark matter and do a Ph.D. in biology even though he lacked much of the background coursework in genetics, molecular biology, and biochemistry that most biology graduate students have.

Last August, Daniel got off a plane from Hong Kong, where he was spending his final semester of undergraduate studies, and moved into the Cutting House at CSHL. From that time on, he was surrounded by biologists—all day, every day. The other students in his class came fully versed in 3-C, 4-C, Hi-C and the blah-blah of molecular biology. So every time a lecturer asked who wasn’t familiar with some bit of biology, everyone looked to Daniel. But like the other physicists, engineers, chemists, and mathematicians who have joined the Watson School before him, Daniel did great. Perhaps the biggest challenge was figuring out a way to tell the difference between all the red and green being used to show gene expression changes, co-localization, and everything else. Daniel is color-blind.

In July, Daniel began his thesis work with Alex Koulakov, working on how we detect smells. At the moment, Daniel is following up some work from previous lab members, working out a model of how only a single, random odor receptor gene of over 900 in the genome is expressed in an individual olfactory neuron. For Daniel’s thesis, he’s going to study how we smell: the chemical properties that smell to us, the range of responses our neurons have to those smells, and even our varied perceptions of smells. Why does a mouse smell earthy, warm, or pungent but a computer mouse smells like “nothing”? Working together with Florin Albeanu’s group, Daniel hopes to figure out the chemical and neuronal rules that determine what something smells like. So while Daniel left behind the dark matter of the universe, he’s off to hunt the exciting mysteries of the “smelliverse.”

Neuroscience researchers work to figure out our brains process smells, including what features are essential to identifying and separating odors.   Read more »

Neuroscience researchers at CSHL are trying to figure out how the brain processes smells and what features of odors are important in that process.   Read more »