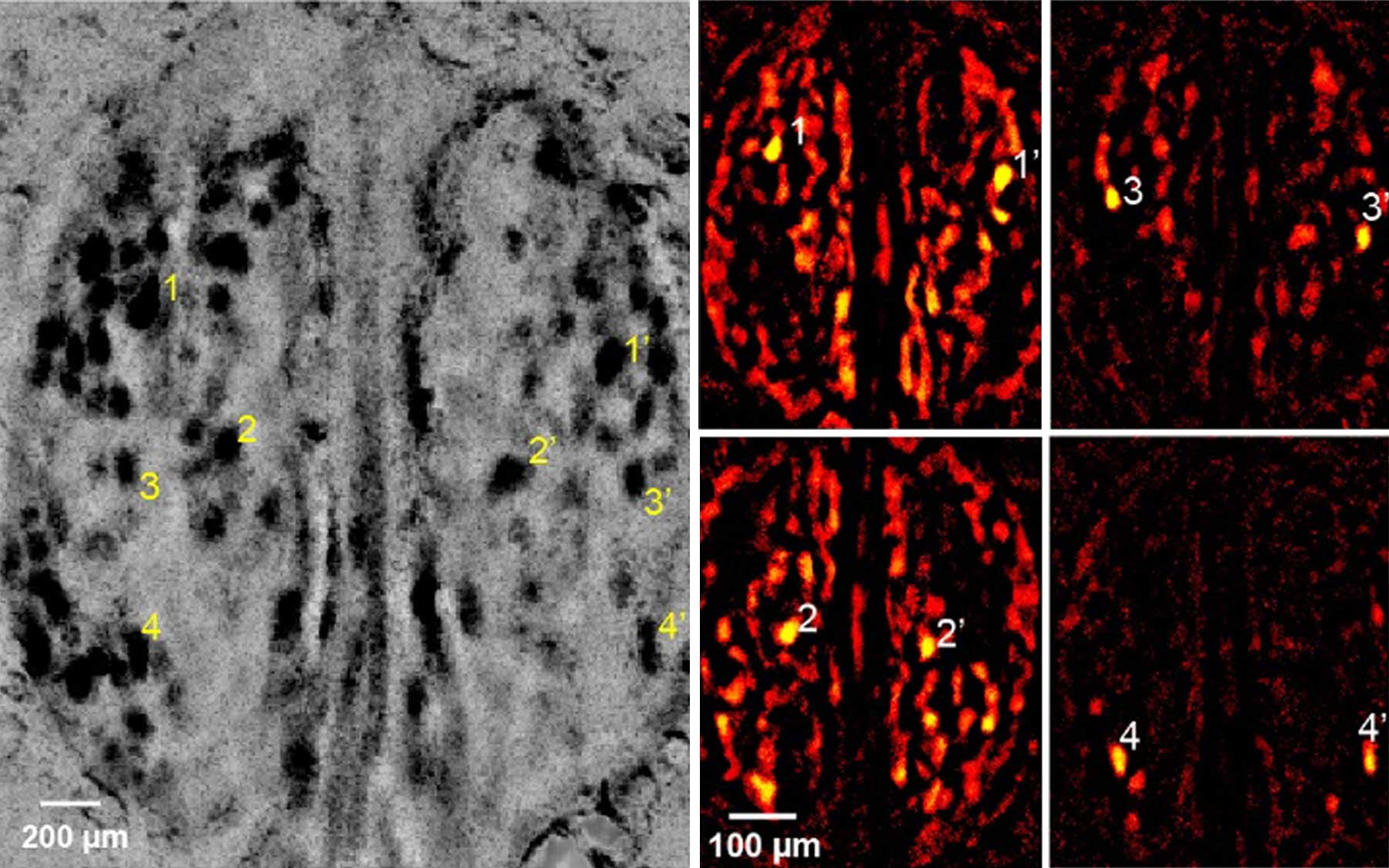 Projection image of intrinsic optical imaging (IOI) signals on the dorsal aspect of the bulb in response to a panel of 60 stimuli across 4 repeats, numbers indicate location of functionally best matched glomeruli across the left and right bulb hemispheres. The right four panels are color maps showing correlation of the average odor-evoked response of each pixel in the field of view with respect to reference ROIs (1-4).
email envelop icontwitter icon share buttonfacebook icon share buttonlinkedin icon share button

How do animals smell? Scientists haven’t quite decoded it yet, but researchers at Cold Spring Harbor Laboratory (CSHL) have found that it’s different from previously proposed.

To understand how the brain processes and interprets smells, CSHL neuroscientists Florin Albeanu, Alexei Koulakov and colleagues are putting past odor classifying models to the test, and they’re discovering discrepancies.

For neuroscientists, sensory experiences such as smell are based on the activity of neuronal networks that assign different values to stimuli we receive. With vision, for example, the brain values edges, contours, luminance, and color, using these variables to form what we see.

But when it comes to smell, “we don’t really know what the brain is looking for, and we don’t know what physical or chemical features, if any, the brain extracts,” Albeanu said.

In the past, researchers have compared the smell processing system in the brain to a chemist, in that it may search for landmarks like physical and chemical properties when it tries to dissect and analyze odor molecules. But Albeanu and Koulakov think that may not be the case.

“We found that to smell, the brain doesn’t work like a chemist at all,” added Koulakov. “Chemists accumulate enormous lists of properties they assign to molecules. But it appears that neurons care about more than just those properties. In fact, they’re extracting something else, and we don’t know what at this point.”

Generally, scientists know that odor particles enter the nasal cavity at the front end of the olfactory system, where odorant receptors expressed by olfactory receptor neurons in the sensory tissue bind to them. The olfactory bulb, a structure located in the front of the brain for mammals, contains a series of neuronal circuits that process information sent up from the receptors. The bulb then sends out this information to several higher processing brain areas, including the cerebral cortex. There, the olfactory output messages are further analyzed and broadcast across the brain before they are conveyed back to the bulb in a feedback loop.

“Rich feedback makes the olfactory system somewhat different from the visual system,” Koulakov said. “There is an extensive feedback to those early levels of processing from the cortex and that could make predictions about the nature of the incoming stimuli and modify whatever we pay attention to.”

That’s how the olfactory system may subtract noise, or background odors like the smell of your own breath, to isolate important cues such as new and surprising odors.

In this latest research, the team, including Honggoo Chae, Daniel Kepple and Walter Bast from CSHL, and Venkatesh Murthy from Harvard University, analyzed the responses of mice neurons to many different smells. They then characterized the similarities between pairs of different smells in terms of the chemical and physical features of the molecules. Using this information, the team investigated possible ways to relate the molecular features of odors to how similarly they are represented in neuronal activity throughout the olfactory bulb.

What they found was that smells with similar chemical and physical features set off different neural activity patterns across the brain. While the physical and chemical characterization of odor molecules are useful guides for navigating the multi-layer sensory system of smell in mammals, Albeanu and Koulakov think that it doesn’t describe the whole picture.

“If you think about the structure of the olfactory system, then it becomes clear why this is,” Koulakov said. “Because olfactory experience is very subjective, perception of smell actually depends on the context, and on an individual’s prior experience.” Factoring these in, he said it’s probable that the entry-level of olfactory inputs and the further processed bulb outputs care about different aspects of smell which go beyond physical and chemical features of the odorant molecules.

The “rather unexpected” results of the new research, Koulakov said, are an exciting opportunity to build a more comprehensive and testable computational model for the odor space that captures the differences in informational relevance for scent features across the various levels of olfactory processing. With this, scientists can work towards ultimately solving the mystery of how humans smell.

Their results, published in the journal Nature Neuroscience, differ from other published studies that found predictable relations between molecular properties of odors and activity in the early stages of the olfactory system. The new research found that while there were some correlations between some molecular properties of odors and corresponding neuron activity response, they “held little predictive power when new odor pairs or shuffled properties were tested.”

This paper is the first discovery to come out since the pair received the National Institutes of Health (NIH) Director’s Transformative Research Award for an innovative neuroscience research project on the olfactory system in 2018. Albeanu views these findings as “an opening act” for continued research in this area.