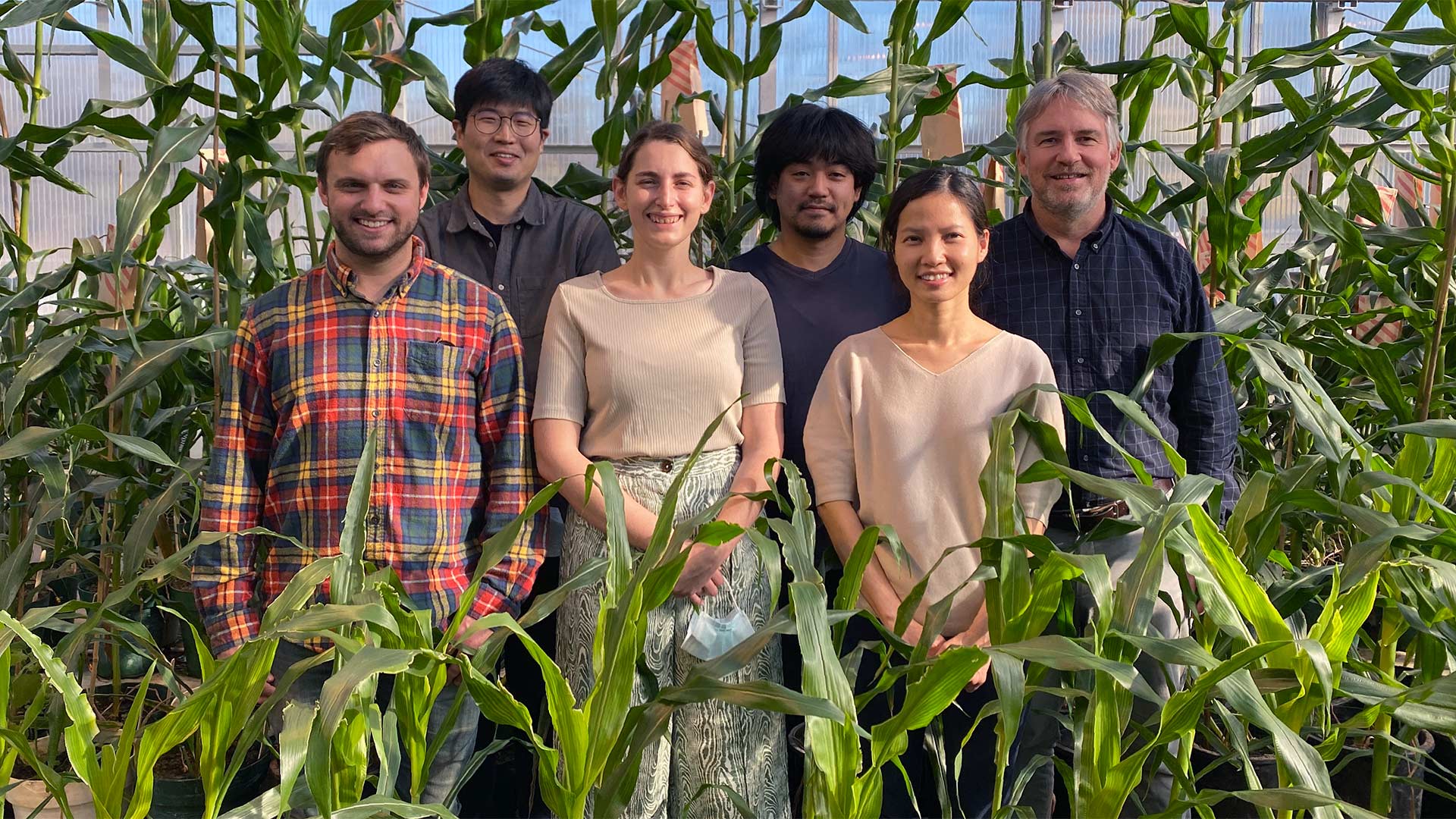 As the human population grows, food production needs to keep pace. Unfortunately, the amount of land available for crops is shrinking due to climate change and urban development. But thanks to Cold Spring Harbor Laboratory (CSHL) Professor David Jackson, fields of corn are becoming more productive. Using CRISPR, a powerful DNA-editing tool, he is designing crops that bring higher yields on the same amount of land. He and postdoctoral fellows in his lab, shown in this image, are packing an ear of corn to the brim with kernels. From left to right: Kyle Swentowsky, Jae Hyung Lee, Penelope Lindsay, Munenori Kitagawa, Thu Tran, and CSHL Professor David Jackson. Image: Jackson lab
email envelop icontwitter icon share buttonfacebook icon share buttonlinkedin icon share button
How do you make better corn? Climate change is causing longer droughts, more intense heat, and unpredictable storms that drastically change local environments. At the same time, the human population is growing, increasing the demand for food that is cultivated on increasingly fragile lands. Crops that are biologically unprepared are at risk of being eradicated, putting food sources for humans and livestock in danger. Approximately 40% of U.S. land is farmland (pdf); more than 90 million acres of that land is corn.

To keep up with the growing demand for food, scientists like Cold Spring Harbor Laboratory (CSHL) Professor David Jackson are improving corn. He and his colleagues are finding ways to increase the amount that can be grown on the same acreage of land. In order to stay one step ahead of the changing climate, they are using state-of-the-art genetics to tinker with the corn genome.

About 10,000 years ago, an ear of corn was made of less than a dozen hard kernels. After millennia of breeding, the corn we see today on farms and in grocery stores is packed with hundreds of juicy kernels. To improve corn more quickly, though, scientists needed to map the sequence and structure of the corn genome. After four years, this multi-institutional feat was published in 2009 by CSHL Professors Rob Martienssen, W. Richard McCombie, Doreen Ware, and their teams.

Armed with the corn genome map, Jackson wanted to figure out what parts of the genome could be manipulated to affect specific traits and adaptations. Jackson says:

“There are literally hundreds of varieties of corn that are grown by farmers around the world because they have to be adapted to the local environment. For example, a corn variety that grows well in Iowa would not grow well in New York because the conditions are different, the pathogen pressure, disease pressure is different.”

Jackson’s lab was one of the first to apply CRISPR, a powerful DNA-editing technique, to corn’s genome. With this tool, Jackson and his colleagues can figure out how to adapt crops and cram even more kernels onto an ear.

Cramming in more and more kernels

One way to increase the yield of food per acre, across different environments, is to increase kernel yield per ear of corn. Kernels develop from stem cells; add more stem cells and you get more kernels. Jackson and his postdoctoral fellow Lei Liu discovered that a gene called ZmCLE7 could affect kernel yield. Jackson and Liu used CRISPR to edit the ZmCLE7 promotor region, the portion of DNA that regulates how much a gene is being used. They discovered that if they carefully decreased ZmCLE7 activity without turning the gene off completely, stem cell division would increase. The resulting corn ears were wider and had more rows of kernels.

By enhancing stem cell growth and differentiation, Jackson and Liu hope to widen an ear of corn and pack in more rows of kernels. But there may be ways to pack in even more kernels by lengthening the ear, which requires a different set of genes.

Each kernel of corn grows from a pollinated flower; unpollinated flowers die. Jackson, Liu, and collaborators at Huazhong Agricultural University in Wuhan, China found a corn strain with long ears. A high percentage of the flowers were pollinated and that led to a high kernel yield.

Ethylene is a plant hormone usually associated with maturation or ripening. Jackson and Liu found that a gene that normally drives the production of ethylene (ZmACO2) was less active in the corn with longer ears. They used CRISPR genome editing to turn off ZmACO2, resulting in more pollinated flowers, leading to longer ears with more kernels. Having a nonfunctional version of ZmACO2 had the same effect across many different varieties of corn. This makes it practical for farmers to breed Jackson’s low ethylene–corn with local varieties and produce longer ears.

When the ethylene-producing gene was too active, it led to an overload of ethylene and shorter corn ears with less yield. Liu says:

“We can optimize this gene’s expression or function to then optimize the ethylene levels in the plants.”

The team published their findings in Nature Communications in October 2021. Liu recently accepted a faculty position at his alma mater Huazhong Agricultural University to continue his work in corn genetics. He is planning on combining the findings from this study with the previous one to make ears both wider and longer.

Jackson knows that maximizing kernel numbers requires energy investment from the plant. Instead of providing more sun or soil, he thinks corn may already have the resources it needs.

Plants in the wild have robust immune systems to deal with an unpredictable array of bacteria, fungi, and viruses. However, crops growing under a farmer’s attentive care may face fewer threats. Jackson and his lab wanted to “convince” those plants to spend less energy on defense and more on making seeds and kernels. 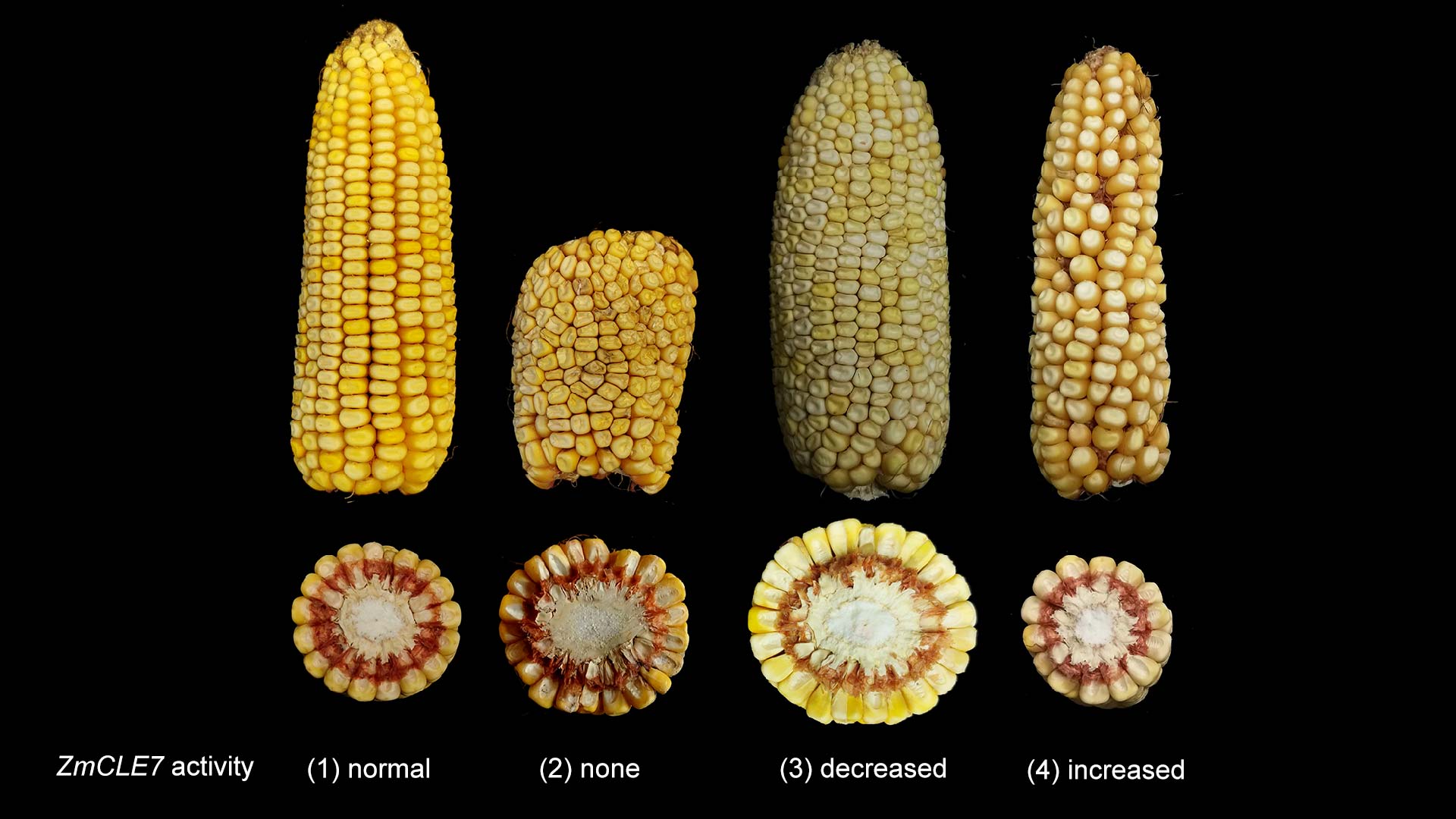 Kernels develop from stem cells, so increasing stem cell division increases the number of rows of kernels per ear. 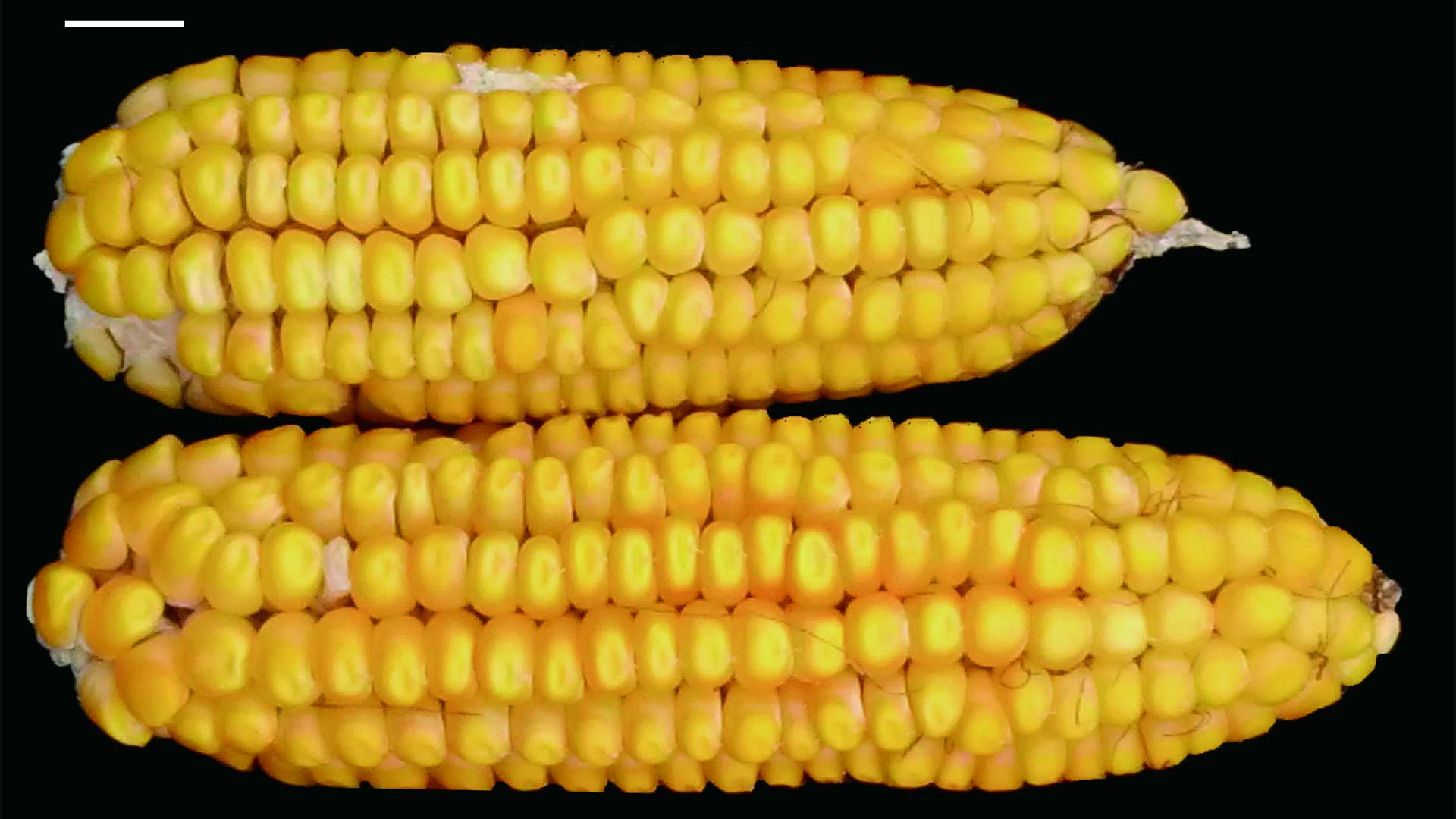 Turning down the enzyme that makes ethylene leads to more flowers getting pollinated and longer ears. 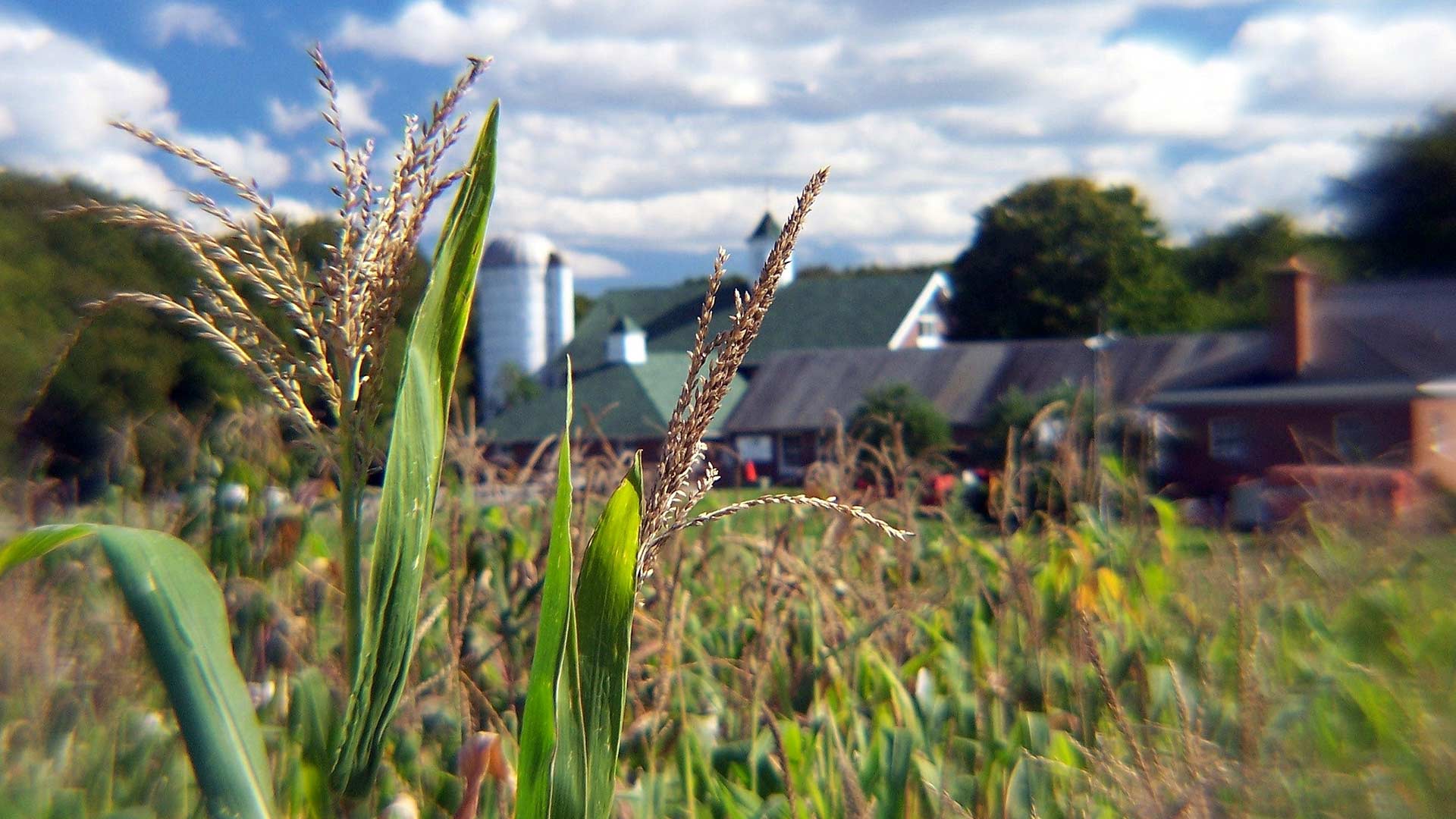 Shunting energy investment away from immune functions could lead to increased kernel yield.

Jackson’s team identified a “two-for-one” corn gene called Gß (pronounced GEE beta) that contributes to both the plant’s development and control of its immune system. Manipulating the gene in different corn strains produced a variety of effects. Some strains could survive without any Gß at all. In some other strains, mutant versions of Gß led to ears with more kernels.

All those extra kernels add up

Adding a few dozen more kernels to an ear of corn may not seem like a lot, but it all adds up. In the decade since the corn genome was mapped, Jackson was able to use CRISPR to widen ears and add 26% more kernels in some corn varieties. Lengthening the ears added over 13% more kernels in several other varieties. Using even more creative approaches may produce even higher yields.

The demand for corn is only increasing, but the lands on which it can grow are limited. Despite the challenges, Jackson sees many possibilities in the crop’s flexible genome. Corn’s limits have yet to be reached.

David Jackson earned his Ph.D. at the John Innes Institute, University of East Anglia in Norwich, England, and joined CSHL in 1997. He is a leader at the Laboratory in both agriculture science and STEM education. In addition to his plant research, Jackson is the program director of Partners for the Future, a CSHL program for high school students to gain hands-on lab experience. Whether he’s making crops more resilient against climate change or motivating students to pursue research careers, he is always planning ahead for the future of science.

Scientists successfully demonstrated what it describes as a “simple hypothesis” for making significant increases in yields for the maize plant.   Read more »