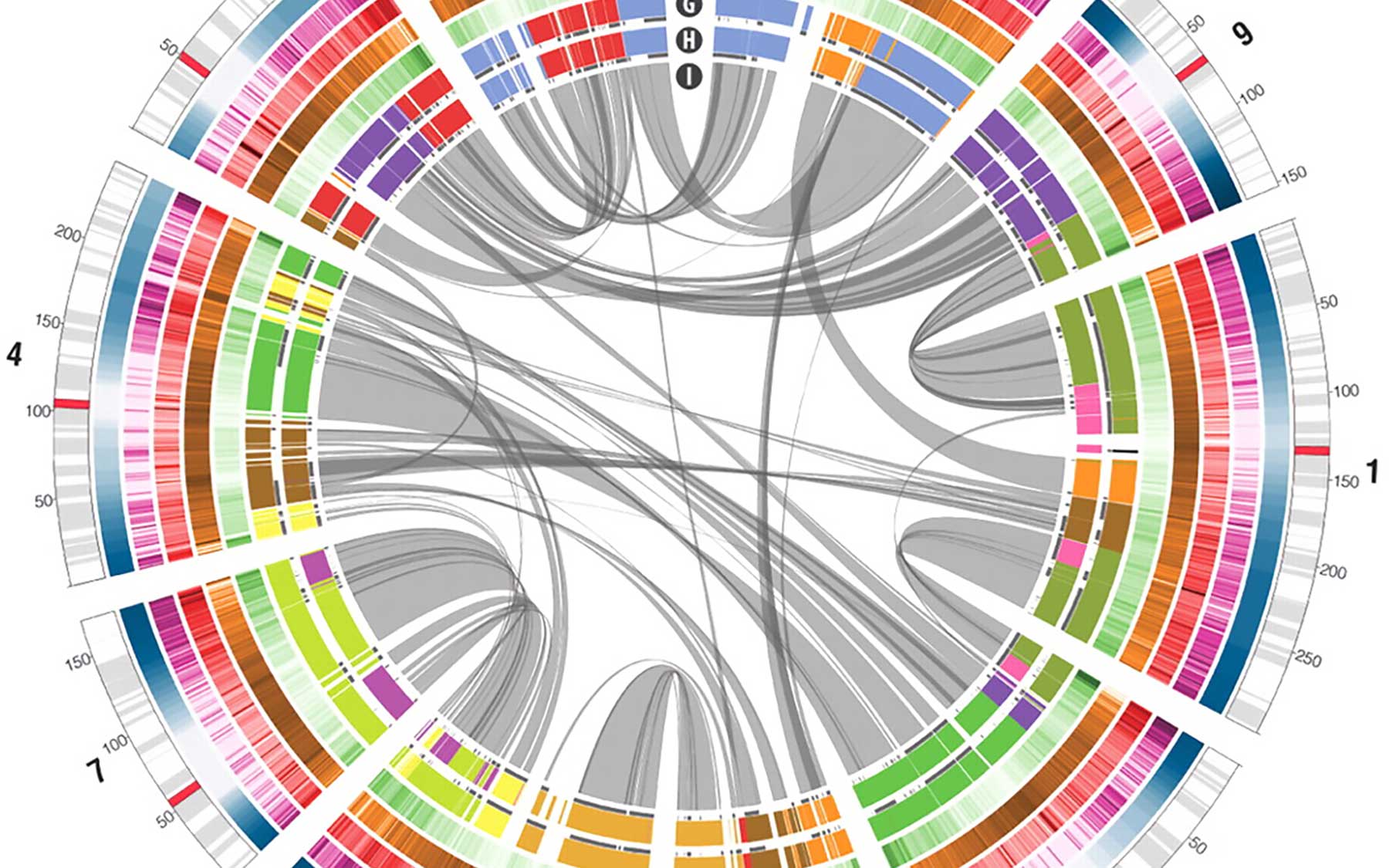 Cold Spring Harbor, NY — A four-year, multi-institutional effort co-led by three Cold Spring Harbor Laboratory (CSHL) scientists culminated today in publication of a landmark series of papers in the journal Science revealing in unprecedented detail the DNA sequence of maize (Zea mays). Maize, or corn, as it is commonly called by North American consumers, is one of the world’s most important plants and the most valuable agricultural crop grown in the United States, representing $47 billion in annual value.

The sequence spans 2.3 billion DNA base-pairs and contains some 32,500 genes, or about one-third more than the human genome, according to the team that assembled it over the last four years. This version of the maize genome—taken from a variant called B73—is important, in part, because it is regarded by the scientific and agricultural communities as a “reference” version. It represents a significant filling-in of gaps in a draft maize sequence announced a year and a half ago, but more importantly, comes with what amounts to a detailed reference manual, a set of comprehensive annotations.

A scientific and practical landmark

In a parallel effort, Ware’s CSHL team also helped generate the first so-called “HapMap” of maize in collaboration with Edward Buckler, a USDA scientist. The HapMap, a shorthand for haplotype map, gauges diversity in the maize genome by comparing 27 distinct genetic lines of the plant with the reference version. A human HapMap, prepared in conjunction with the Human Genome Project, has revealed important linkages between genetic variations and risk for major diseases in ethnically and geographically distinct human populations.

“What’s important about the maize project,” says W. Richard McCombie, Ph.D., CSHL Professor, co-principal investigator on the maize genome project, and a pioneer in genome sequencing efforts, “is that it provides a reference DNA sequence for the most important agricultural crop in the U.S., making it much easier for people to look at the many variants of different strains or ‘accessions’ of maize.” New sequencing technologies, just now becoming commercially viable, will now “analyze other maize strains by comparing them to this one—albeit at dramatically lower costs and accelerated speeds,” McCombie notes.

Another of the CSHL co-project leaders, Professor Robert Martienssen, Ph.D., puts the maize sequencing project into historical perspective. Martienssen, a world leader in research on transposons—bits of DNA that copy and insert themselves randomly across the chromosomes—noted that transposable elements are found in all organisms, “but were discovered in maize more than 60 years ago,” by CSHL’s Barbara McClintock, who was honored with a Nobel Prize for the discovery in 1983. “It is a remarkable achievement to now be able to visualize transposons in such detail in the maize genome sequence,” Martienssen says.

“Wonderful diversity” and its evolutionary implications 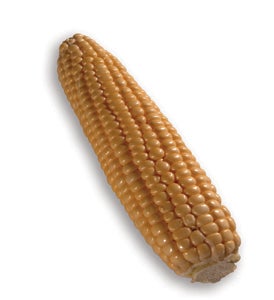 Transposons play a particularly dramatic role in the maize genome, as the sequence clearly shows. Nearly 85 percent of the genome is composed of hundreds of families of transposable elements, distributed unevenly across the 10 maize chromosomes. This is one aspect of the maize genome’s complexity; another is its variability between different “individuals.” Maize plants from two different strains are, on average, more genetically different than humans are different from chimpanzees.

“The wonderful diversity that we see in maize today is the product of many things,” Ware explains. “Several million years ago, the maize genome effectively doubled in size, to 20 chromosomes, and then, subsequently, returned to its current size of 10 chromosomes. In the detailed sequence that we now have obtained, we can begin to study the impact of that ‘doubling event.’”

Ware notes that genome doubling is not uncommon in the plant kingdom, and hypothesizes that “it may be a very successful way for speciation to occur.” Once an organism can draw on two full sets of essentially the same genes, it can begin “to de-evolve certain of the genes in one set and adapt them to some other function—importantly, without compromising the gene’s original function,” she says. In this way, hypothetically, the plant could become more “capable,” in genetic terms, over long periods of time.

The maize reference genome will also provide a basis for close investigation of the impact of human breeding and trait selection, in the much more proximate historical era since the plant’s domestication, some 10,000 years ago. Maize is known to have evolved from a common grass found in Mexico and Central America called teosinte. It was human intervention—breeding—that led to full domestication and unimagined value and utility. As maize became ever more useful to people—as food and animal feed—it was carried beyond the volcanic soils of central Mexican valleys and the indigenous peoples of North and South America to the far reaches of the planet, at first by European mercantile and imperial powers of the sixteenth and seventeenth centuries. It has long been a central cultural element in the region of its initial domestication, but has since worked its way into the sinews of many other cultures. This week, for example, in schoolrooms across America, tales are being told about how “Indian corn” was served at the very first Thanksgiving meals in early-seventeenth-century New England.

The genome as a starting point for improving an indispensable crop 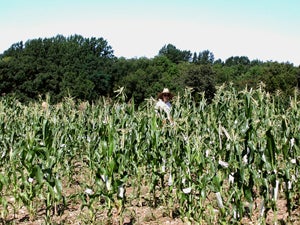 Today maize is an important, if controversial, source of biomass for a wide range of industrial applications, and, very recently, a prime source of biofuel. CSHL’s Ware, who is also a scientist at the USDA, has a keen interest in thinking about maize in terms of its identity as agricultural germplasm. “What we’re trying to do is identify what is best—and keep the best in the germplasm,” she says. “The ‘best’ will vary, depending on what the environment is. What’s best in Missouri is not necessarily best in Washington state. That helps explain why having a HapMap of maize will be useful for breeders in producing improved corn plants.

“We’re trying to use the genome to understand not only the differences between individual lines, but also to identify what differences, in genetic terms, are still available within maize. Ideally, we’d like to understand the function of every gene. In comparing different lines, we want to find genes associated with what we call quantitative traits—genes that affect traits of importance to agriculture, everything from the size of the seeds to when the plant flowers to whether it can tolerate drought or dampness.

“With climate change upon us, there is great need in the years ahead to adapt existing germplasm to future needs,” Ware suggests. “Will we be able to grow maize 20 years from now in the same places we do today? What will we need to do to improve this extremely valuable plant?” With the reference version of the maize genome and tools like the maize HapMap now in the public domain, the search will proceed with a new intensity, made possible by a treasure trove of new data.

In addition, The DNA Learning Center of Cold Spring Harbor Laboratory has just launched a series of podcasts and short videos explaining the scientific importance of the maize genome as well as the cultural and historical significance of the maize plant itself. These can be accessed at: www.weedtowonder.org For additional educational information about maize and genetics, please visit: www.dnalc.org

The maize reference genome and the haplotype map are published online today ahead of print in the journal Science, in addition to a supplementary poster on the maize genome placing the plant and the sequencing project in historical and cultural perspective. In addition to CSHL’s Ware, the co-lead author of the reference genome paper is Patrick S. Schnable, Ph.D., of Iowa State University.  The paper is entitled, “The B73 Maize Genome: Complexity, Diversity, and Dynamics.”  The corresponding author is Richard K. Wilson.

The Hap Map paper, appearing simultaneously online ahead of print in Science, is entitled, “A First-Generation Haplotype Map of Maize;” the corresponding author is Edward S. Buckler.

Doreen Ware and her CSHL colleagues have also played an important role in authoring  a series of papers probing some of the biology underlying the maize reference genome that are being published concurrently in the journal Public Library of Science (PLoS) Genetics.  Please visit: http://www.plosgenetics.org/home.action.

A new, much more detailed reference genome for maize, or corn, as it is called in the U.S., provides new insight into the crop.   Read more »