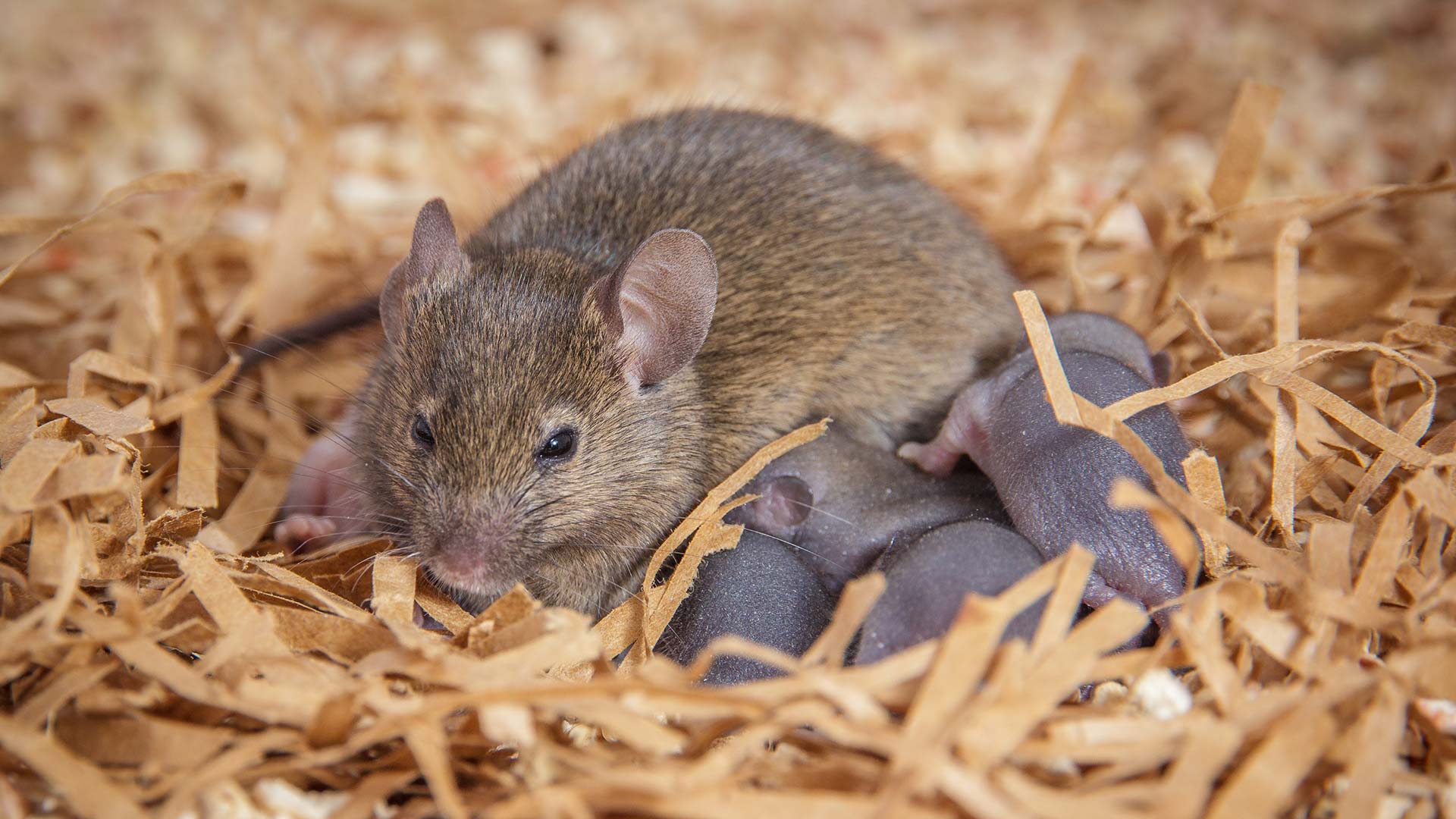 A mother mouse watching over her pups. CSHL Associate Professor Stephen Shea studies how the brain controls social behaviors in mice such as maternal care. His work may shed light on the brain wiring that goes awry in brain disorders, such as autism, that affect social behavior and interactions.

Life isn’t always easy for little mouse pups: Hours to days after they are born, the squirmy babies, who can’t hear or see, can roll or stumble away from their nest. Cold and lonely, they call out to their mother. Luckily, Mom snaps into action to ensure the adventures of the little ones are short-lived. Grabbing each pup by the skin on their backs, Mama mouse brings each baby back home to safety.

The mom’s behavior is innate, burnt into the mouse brain, and requires no training. But where in the brain does it happen and how does the brain process or execute it? And what happens in those rare cases when the animal brain doesn’t properly execute such behavior? That’s what Stephen Shea is trying to answer in mice, with hopes that it may someday be applicable to humans.

Shea, an associate professor at Cold Spring Harbor Laboratory, discovered that this innate mothering behavior corresponds to the firing of cells in a region of the brain called locus coeruleus, a cluster of cells that can be found in the brainstem of all vertebrates. Locus coeruleus is also the source of noradrenaline, a chemical that affects some key brain functions.

Shea’s work may shed some light on the iconic debate about whether creatures are shaped by nature or nurture.”

Shea’s work has greater implications. He hopes that understanding the brain circuits that facilitate this very simple action could be a window into how disruptions in wiring affect social behavior, and a key into understanding inappropriate social interactions, such as those observed in people with autism spectrum disorders. And it may even shed some light on the iconic debate about whether creatures are shaped by nature or nurture.

When social animals encounter one another, they interact by taking in sensory inputs (such as sounds and smells), processing them in the brain, and responding appropriately. In popular conception, there are two competing factors that determine animal or human behavior, hard wiring and learned traits, or as it’s commonly known nature versus nurture. Neuroscientists and biologists, however, don’t think of animal responses as being the product of one or the other but an interplay between the two. One of the ways to understand this back-and-forth in the brain is by working backward, through the lens of behaviors that can be innately expressed, such as the maternal ones in mice, and then how the innate expression of that behavior is further modulated by learning.

“We study social communication behavior between mice,” Shea says. “Mice talk to one another, they smell one another, and they can learn a lot from that. We want to understand that process, how that’s represented in the brain [and] what the mechanistic controls of those behaviors are.”

Though innate in the neural representation of maternal behavior, mice change their behavior toward the pups under different conditions through plasticity in the brain. For example, virgin mice tend not to actually show such caring behavior, ignoring or even killing the young in some cases. But if the females are co-housed with a mom or repeatedly exposed to the pups, they act like moms themselves and their behavior changes. They start to care for the pups and become sensitive to their cues so they will rush to the baby mice when they wander away from the nest.

This video shows how neurodevelopmental disorders like Rett syndrome can affect the mouse maternal behavior of pup retrieval.

“How that happens in the brain is not well understood,” says Dayu Lin, a professor at the Department of Neuroscience and Physiology and Department of Psychiatry at NYU Langone Health who is not involved with Shea’s research. “Something must have changed in the brain to cause the animal to show different kinds of behaviors toward the pup, so Dr. Shea’s effort is mainly trying to understand which part of the brain is relevant to what process and what kind of changes have happened in those parts of the brain.”

Over the several years that Shea has been working on this, he has made some important discoveries. In addition to finding the region that corresponds to the behavior, he found that animals who carry a mutant copy of a protein called MeCP2 have difficulty learning such maternal retrieval behavior.

“The brain becomes more fixed and doesn’t have the capacity to change,” Lin says. “And that is one of the reasons why animals are unable to learn those innate behaviors.”

When mutated, MeCP2 is also responsible for a neurodevelopmental disorder called Rett syndrome in humans, which afflicts primarily females, affecting their ability to speak, walk, eat, and even breathe easily. If researchers can understand how MeCP2 affects the mental or developmental ability to acquire and maintain communication circuitry in mouse models, they might pick up clues as to how it may cause problems in humans.

“MeCP2 causes a fundamental disorder because it plays an important role in the brain, and we think it’s important for controlling plasticity, which is the ability of the brain to change and adapt to new conditions, and one of those conditions is actually maternity,” says Shea. He explains that when a healthy female mouse has a maternal experience, either because she has her own pups or because she encounters the pups of another female, there are changes in the auditory cortex, the part of the brain that encodes or detects auditory stimuli, including the pups’ distressed squeaks and other vocalizations. Understanding how the brain can change in health and disease increases our fundamental knowledge of how it wires and rewires itself and what could go wrong.

To study the mice, Shea and his colleagues utilize optical methods to look at the brain’s electrical signals. In the brain, axons, which carry information from one area to another, do so through electrical impulses, acting a bit like wires. Researchers use a virus to deliver a genetic piece of DNA to some neurons and make those neurons produce a protein that is a sensor for activity. What they detect is the so-called calcium signals that are correlated with electrical activity. When calcium levels rise in the cell, the protein glows brighter, allowing researchers to see the activity of neurons.

Something must have changed in the brain to cause the animal to show different kinds of behaviors toward the pup.”

In many ways, these two neuron types work like a seesaw. Both are needed for control of stable neuron activity patterns, and “one of the ways the brain can change is it can tip that balance away from inhibition and toward excitation,” Shea says. “So, when a mouse has a maternal experience, there’s a disinhibition of the brain. That tips that seesaw more toward excitatory and away from inhibitory and that is a feature that defines this critical period, and that balance is not maintained properly in the MeCP2 mice.”

Shea would like to get as close as possible to a working model of interactive behavior that goes from detection of a signal at the periphery to how that signal is processed, weighed against other factors in the decision-making process and how an animal chooses a behavior as a full loop. And lastly, how that affects the behavior of a social partner.

Shea discusses how his lab studies the brain circuits involved in social behavior in mice. Their discoveries may help better understand human neurological disorders, like Rett Syndrome and autism, that affect social behavior.

“So, what I’d like to be able to do is understand the brains of two or more individuals and their behavior as a dynamical system,” he says.

Such a dynamical model would help researchers understand the decision-making process, along with the ability to make predictions about changes in the brain. So, if the activity in one part of the chain is perturbed, they can observe how that would affect the individual and their social partners.

“In the context of innate behaviors, which are presumed to be relatively hardwired inside of a brain, you still see a huge amount of changes that happen,” says Lin. “So, I think [this work] really helps us in understanding the flexibility capacity the brain has and how much we can move to guide different behavior output.” In more layman terms, Shea’s work speaks to that centuries-old nature-versus-nurture debate. Creatures, whether animals or humans, aren’t shaped by either one or the other. We are the product of both.