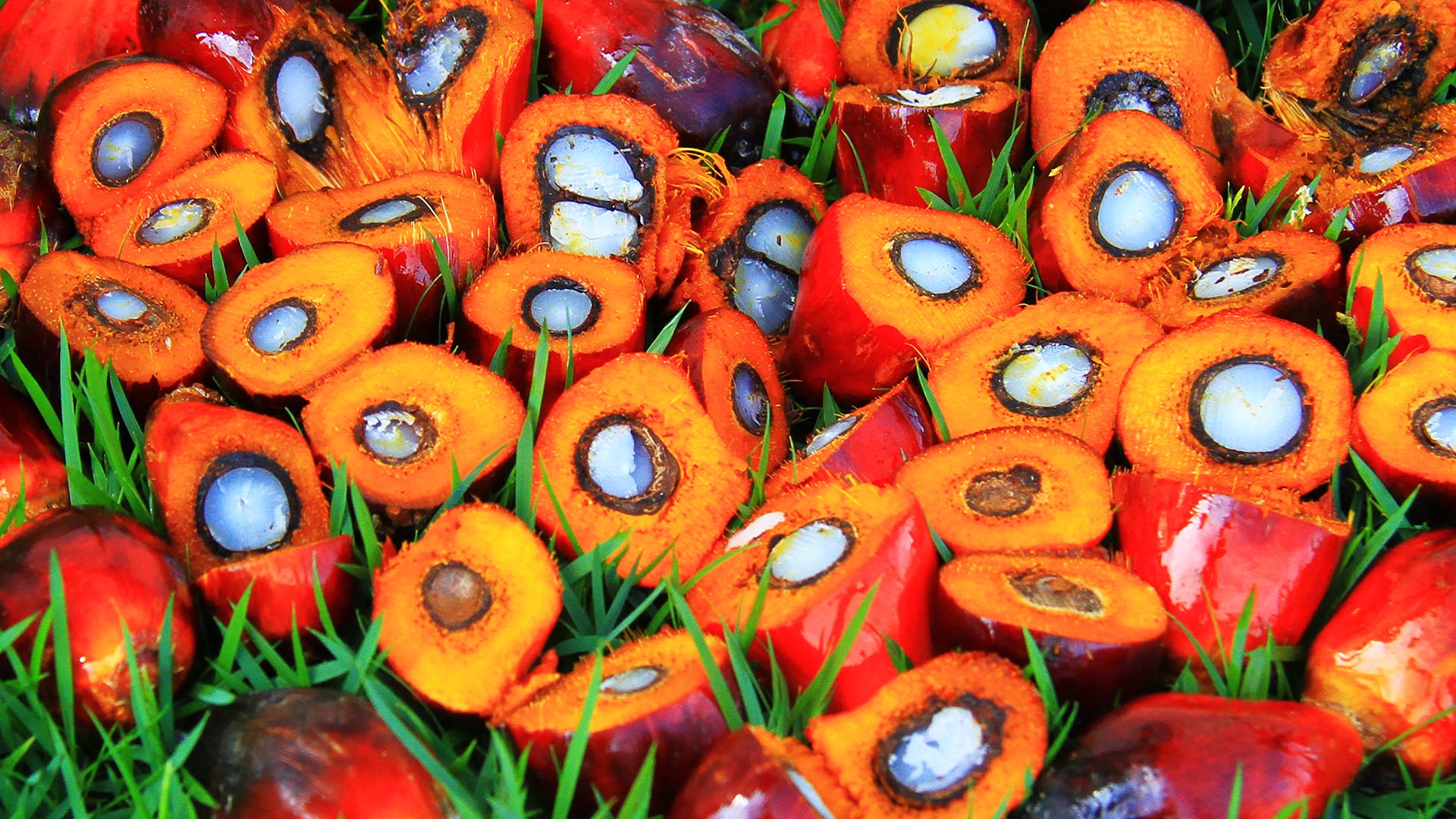 Photograph taken in Malaysia of split oil palm fruits. Palm oil is an edible vegetable oil derived from the reddish pulp of the fruit of oil palm trees. The white center, or kernel, is used to produce palm kernel oil for cooking and grooming products. Solids left over after the oils are extracted are pressed into nutrient rich animal feed. Credit: Tafilah Md Yusof/Pond5.

As little as two centuries ago, the northern edge of the island of Borneo, home to Malaysia’s Sarawak state, was covered in a verdant canopy that stretched—uninterrupted—from shore to shore. It was a forest that had persisted for more than 100 million years, sheltering a dizzying abundance of plants, animals, and fungi that were found nowhere else on Earth. It survived the extinction of the dinosaurs and countless cycles of glaciation. It housed humans for 40,000 years while our species grew and grew around the world.

Then, over the past few decades, the forests of Sarawak faced threats unlike any before. The canopy began to recoil, its edges assaulted by the expansion of hydroelectric power, logging, and, most impactful of all, oil palm plantations. To many people, these changes look like the necessary costs of progress. Development has consumed almost a third of the forest, but it has also lifted millions out of poverty. The first wave of oil palm plantations, from the 1970s to the 1990s, provided farmers with seven times the income of subsistence-food croppers in the same regions. Industry has brought paved roads, better schools, and modern information infrastructure.

Palm oil is the Shiva of the modern consumer economy, a great creator and a great destroyer. Presently it accounts for 60% of all cooking oil—more than 62 million tons in total—and it’s astonishingly ubiquitous. It’s found in half of supermarket goods, from instant noodles to ice cream, air fresheners to shampoos. You may not see it but you are eating it and washing your hair with it. Consumer-product manufacturers prefer palm oil because it blends well with other oils and is the ideal elixir to create various consistencies. Savvy food marketers love it because it contains low levels of artery-clogging trans fats. You’d have to look far and wide to find a major company that doesn’t have palm oil on its hands. They include Walmart, Colgate-Palmolive, Kellogg’s, Nestle, McDonald’s, Ikea, Target, and Whole Foods. Palm oil is mixed into animal feed and biofuels. Over 50% of the palm oil imported into Europe is used for biodiesel to power trucks and cars.

Malaysia accounts for 26% of the vast production of palm oil today, making it a great creator for the local economy as well. Almost half of oil palms in that country are grown by smallholders rather than large-scale agribusiness. The crop is so important that government insiders consider its development synonymous with the eradication of poverty in Malaysia. Between 1980 and 2010, palm oil cultivation doubled in Malaysia. Then, in just four years, it doubled again.

Therein lies the seemingly intractable dilemma of palm oil. Its production is phenomenally important to local peoples and international economies. But it is also tremendously destructive to natural ecosystems and to the global climate.

Tropical forests and peatlands are great storehouses of carbon dioxide, the main gas indicted in global warming. Malaysia’s forests are especially rich in carbon. They can hold up to 220 pounds of carbon per square mile. “That’s equivalent to the emissions from driving an average car from New York to San Francisco and back 76 times,” offers the Union for Concerned Scientists. Razing forests and peatlands unleashes carbon dioxide into the atmosphere in calamitous amounts. Deforestation for oil palm cultivation in Indonesia accounted for 2 to 9% of all tropical land use emissions from 2000 to 2010. Oil palm expansion is also robbing orangutans, tigers, rhinos, and elephants of their natural habitats. Global demand for palm oil is expected to increase from 76 million tons in 2019 to over 400 million tons in 2050.

Environmentalists are realistic enough to know palm oil is here to stay. Too much money and too many powerful government and community interests are tied up in its production. It is hard to overturn the world economy overnight. Plenty of nonprofits are pushing sustainable harvesting of palm oil and an international movement, Roundtable on Sustainable Palm Oil, is signing up companies to pledge to employ smart environmental practices. However, these grassroots efforts, though important, may amount to little more than a superficial solution.

What’s most needed is a way to produce more palm oil on less land—to keep the ice-cream makers happy while saving the rainforests. Here is where science must step in. And it has. Novel genetic methods exist to induce each oil palm tree to produce more fruit, containing more of the precious oil. It’s a way to create more while destroying less, and it can be scaled up now.

Rob Martienssen, a plant biologist at Cold Spring Harbor Laboratory, has been one of the world’s key researchers into palm oil production, why scientific methods have gone wrong in the past, and how to right those wrongs. Launching a project to produce more palm oil from less land was the easy part. Scientists locked in on that goal some decades ago and set out to clone a single “elite” palm, one that produced a bounty of oil, into 50,000 palms just like it. They even succeeded, up to a point. “They thought this was going to solve all problems,” Martienssen says, but cloning the elite palm in the lab turned out to offend the plant’s natural growth processes. Once planted, the identical trees were “mantled:” Instead of yielding the promised bounty, the plants produced gnarled fruit that gave no oil.

It took an international collaboration between Martienssen’s group at Cold Spring Harbor Laboratory and their colleagues at the Malaysian Palm Oil Board nearly 20 years to unravel the mystery of the mantled fruit. They started by assembling and analyzing the whole genome sequence of the Elaeis guineensis oil palm. That enormous effort only made the problem more puzzling, however, because they found no genetic differences between normal and mantled clones.

Rather than give up, the researchers dove even deeper, beyond the DNA of the oil palm and into the layer of biology that regulates how DNA is read and translated: the epigenome. To their astonishment, they found that the huge difference in the mantled clones was the result of a single, tiny epigenetic change. Palms that produce mangled fruit have an altered molecular switch that interferes with expression levels of genes relevant to healthy fruit production. Previously that miscreant switch had been identified in rice plants and was named “karma.” The palm clones literally suffered from bad karma.

“In terms of individual palms, if you have bad karma, then it’s going to literally get no oil,” Martienssen says. With the mechanism behind mantling unmasked, a third partner—Orion Genomics, a private startup founded by Martienssen—was able to develop a simple DNA test that predicts whether a designer seedling will bear robust or withered fruit. Then only the genuine, high-yield clones will make their way into the field.

That epigenetic test could be making a difference in the oil palm plantations very soon. “It’s currently being commercialized jointly by the Malaysian Palm Oil Board and Orion Genomics,” Martienssen says. He projects that reliable clonal stocks could increase yields by 30 to 50%, drastically reducing the pressure for illegal forest clearing. And that’s just the start. Other scientists are working on dwarf varieties of the oil palm that are easier to harvest, that come to maturity faster, and that stay in production for longer.

In Malaysia, the government is finally acting to protect what’s left of Sarawak’s ancient forest canopy. New policies limit the expansion of palm plantations to 6.5 million hectares, which leaves just 1 million more hectares of land for cultivation. These moves create strong incentives to develop a better, smarter relationship between humans and the plants upon which they rely. “From a world production point of view, palm oil is not going away,” Martienssen says. “Reducing its footprint is the best thing we can do to help the rainforest.”