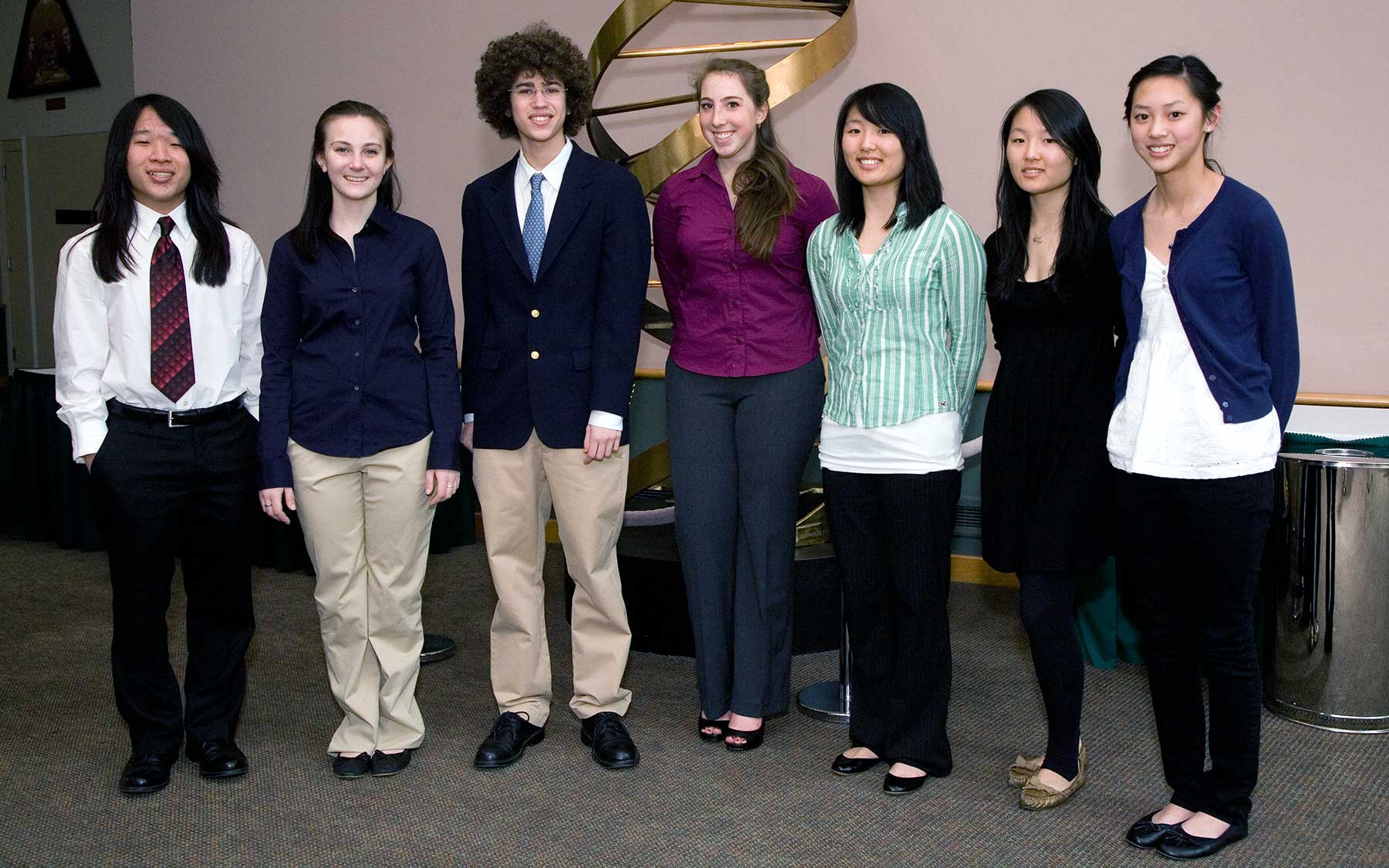 Cold Spring Harbor, NY — Tracing brain pathways that mice use to make sense of sound…scouring sequences in the human genome to identify spots of special research interest… identifying elements in a cell that are turned ‘on’ or ‘off’ by a gene that suppresses tumors… mapping gene networks in plants that hold the key to growing hardier crops…

These were some of the complex research topics presented to an intrigued audience at Cold Spring Harbor Laboratory (CSHL) on March 30, 2009. The speakers were not seasoned scientists from the Lab, however, but a gifted and enthusiastic cadre of local high school students who had spent part of their senior year solving real scientific problems at CSHL, the world-famous lab where molecular biology was born.

The students are members of Partners for the Future (PFF), a program that, since its inception in 1990, has brought students from Long Island’s high schools to CSHL for a year-long immersion in the world of biomedical research.

Mapping connections in the brain

For neuroscientists who study how information is received, processed, and exchanged in the brain, assembling a detailed map of neuronal wiring within and between brain regions that are critical for various functions is somewhat like finding the holy grail. Elizabeth Sajewski and Jon McGinn described projects that were designed to help in this quest.

Both projects involved delicate and painstaking manipulations at the cellular and genetic levels. Sajewski’s work in the laboratory of Dr. Tony Zador, a researcher who studies how the auditory cortex in the brain processes sound, involved tracing the intricate neural pathways that are engaged in mouse brains when the animals receive a sound stimulus. Doing the complicated surgical procedures that involved injections of tracer dyes at precise anatomical locations taught her “the importance of precision and reproducibility in scientific research,” says Sajewski. “Each injection experiment was interesting and revealed important details about the process.”

Jon McGinn’s objective in Dr. Josh Huang’s lab was to engineer a molecular tool that would enable scientists to visualize the connections that neurons make at junctions called synapses. He constructed a fluorescent marker that would glow only at the places where connections occurred. The tool, McGinn says, would be very useful not only to detect synaptic connections in healthy brains, but also visualize how synapses are altered in dysfunctional ones. “My AP biology class introduced me to a bit of molecular biology, let me dabble with PCRs and run gels,” he explained. “The experience at CSHL has taught me how scientific concepts and techniques are applied to solve real scientific problems.”

Although the human genome was sequenced in its entirety in 2001 and the genomes of famous scientists such as CSHL’s own Dr. James Watson have since become publicly available via the internet, the bill to sequence each of the 3 billion DNA base pairs is still a whopping six-figure number.

“The cost and the time that it currently requires are the two main reasons why personalized genomes are yet to be put to use in designing strategies for personalized medicine,” says Josh Elkin, who worked in Dr. Michael Zhang’s bioinformatics group.

One costly and time-consuming step required at the start of the sequencing process is the design of ‘probes’—substances that bind in very specific ways to the bits of DNA that are to be sequenced. Elkin has simplified the process of designing such probes by creating what amounts to a computerized pipeline that links all of the software programs that probe designers use. This reduces costs, time spent, and the need for human interference. “My background in Java programming helped me work on this project,” Elkin said modestly when congratulated on his achievement.

Catherina Yang’s project in Dr. Alea Mills’s cancer biology lab also involved a topic with a huge potential impact for personalized medicine, specifically in the realm of cancer. Using the state-of-the-art methods available to researchers hunting new cancer-related genes and cellular networks, Yang has identified several genes that are controlled by a master molecular switch known as Chd5—a tumor suppressor gene that was identified two years ago by Mills’s group. Yang has also determined whether Chd5, a “transcription factor” that controls how genes are expressed, turns up or dials down the activity of the genes that it targets in cells.

“This information will not only build a picture of how Chd5 is able to suppress tumor growth, but also identify potential genetic targets that can be manipulated to design effective therapy for patients with tumors in which Chd5 has become mutated,” explained Yang, when asked about her work’s ultimate goal.

Finding genes and cellular networks that can be manipulated in plants so that they can withstand harsh environments and stress is a prime “raison d’etre” of plant genetics research. Patriot Yang contributed to these efforts by undertaking a project in Dr. Doreen Ware’s lab to understand how certain genes that encode genetic regulators called microRNAs are themselves regulated. She identified molecular factors that promote the expression of some of the microRNA genes, which are involved in organ development and in adjusting plants’ response to stress.

Kay Chen and Madeline Scricco worked on projects in the laboratory of Dr. David Jackson, who studies genes and signals that regulate plant growth and plant architecture. Jackson and his lab hope to use this information to increase crop yields. Focusing on a mutant corn (maize) plant that was unable to suppress its leaf growth when it began to flower, Chen pinpointed the gene behind this activity and mapped its location in the maize genome.

Scricco unraveled how a newly discovered protein called chaperonin, which might unfold tightly wound proteins into simpler string-like structures, controls the way traffic flows between plant cells through tiny pores called plasmodesmata. These channels are crucial for plant development because they direct the flow of nutrients and signals through growing tissues. “Knowing how protein nutrients can make it through from cell to cell without clogging up the channel is therefore crucial,” explained Scricco.

The students’ projects might have spanned diverse fields such as plant and cancer genetics, bioinformatics, and neuroscience, but their motivation for undertaking this work was the same in each case. As Madeline Siricco put it, “We know we’re doing something useful because answering each of these questions can change the way we live.”

All of the students plan to stay the course in science and will soon be seeking higher education in science and pursuing a research career. Elizabeth Sajewski spoke for the entire group: “Long hours and hard work are not deterrents.”

Without exception, the Partners plan to head back to their research labs this coming summer before heading off to college—a true testament to their enjoyment of the CSHL experience and their enthusiasm for these projects.

PFF is a competitive program open to all Long Island high school students entering their senior year; high school science chairpersons might nominate up to three students in their junior year. The nominees are selected based on their essay applications and transcripts, and those chosen are interviewed by CSHL scientists. From September to March, each student spends a minimum of 10 hours in lab each week, tackling a research project under the guidance of a postdoctoral researcher or an advanced doctoral student. At the end of the research period in March, the Partners describe their research efforts in short talks to an audience that includes fellow students, family and friends, and CSHL scientists and staff.