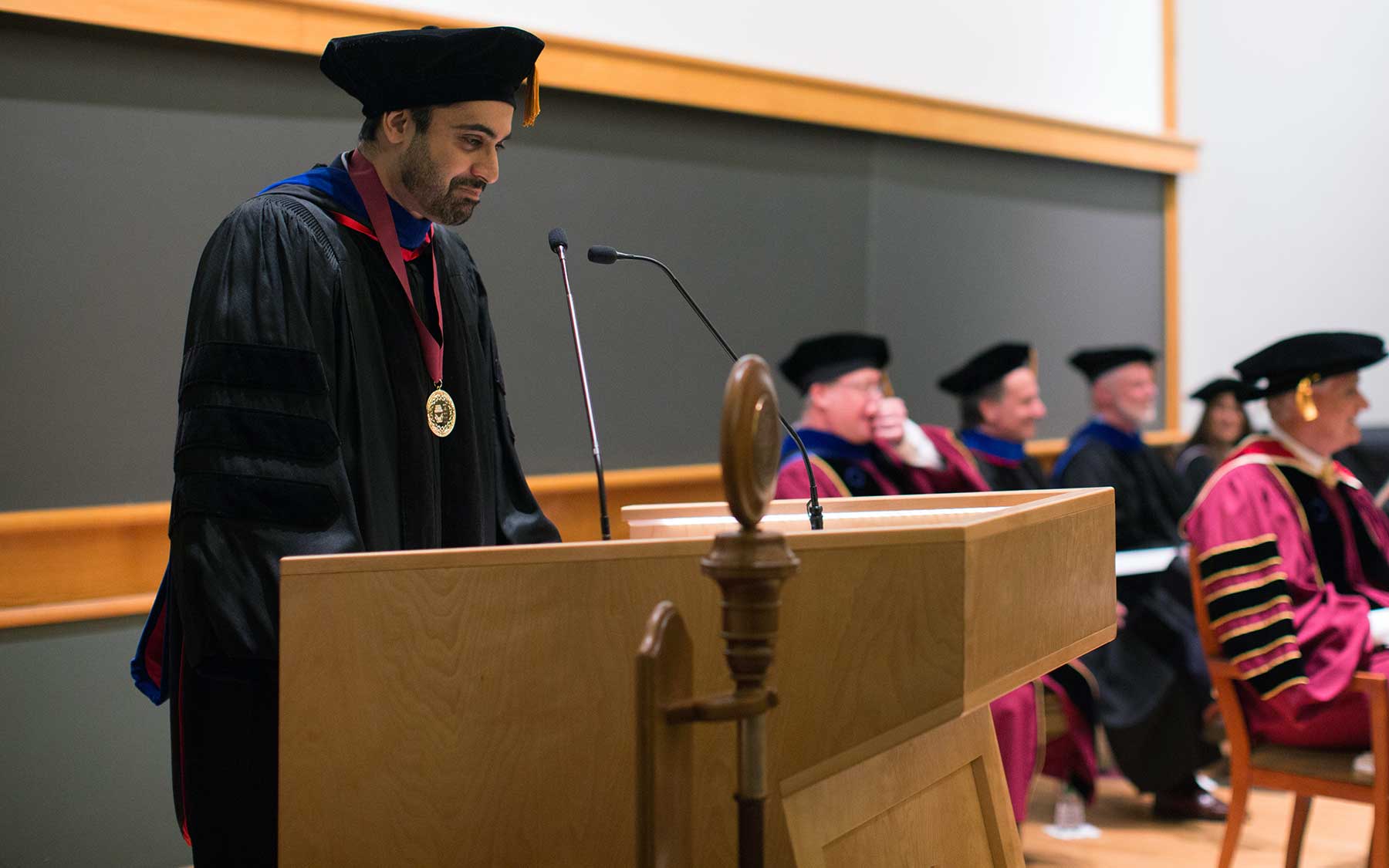 Since 2005, the first-year Watson School of Biological Sciences students have selected the most outstanding teacher of the Fall Term. This most esteemed individual is honored with the Winship Herr Award for Excellence and Creativity in Teaching, named for the Watson School’s founding dean and bringing with it the weighty impact of a weighty, engraved medallion. In the last five years, however, the honor has also brought with it bragging rights as the race between Quantitative Biology (QB) instructors Dr. Mike Schatz and Dr. Mickey Atwal achieves a certain fervor.

The QB Specialized Discipline course has been a favorite since its introduction. Atwal covers the math: probabilities, principal component analysis, Bayesian statistics, Monte Carlo simulations, and more. Schatz provides a genomics perspective, addressing sorting, searching, and indexing in big data sets as well as dynamical programming. They are both great teachers. Their tremendous efforts have inspired several self-described non-quantitative students to take on computational projects.

In 2012, Schatz joined Winship Herr Award winner Dr. Josh Dubnau as a two-time winner, the most that any professor has won. Dubnau was the first to receive the award twice, in 2007 and 2010, for his portion of the Genetics Specialized Discipline course. Schatz won back-to-back teaching awards, in 2011 and 2012. But it wasn’t easy. In 2012, Schatz’s win came after he and Atwal tied in first-round voting. Schatz squeaked by in the run-off vote, but that contest would mark the end of Schatz’s streak. In 2013, Atwal prevailed, winning his first Winship Herr Teaching Award.

Throughout those years, two other instructors were also appearing regularly in the nominations: professors Zach Lippman and Bo Li. They got their well-deserved recognition in 2014 and 2015 respectively. This marked the end of QB dominance in the teaching award.

Which brings us to 2016 and the resurgence of QB. And more specifically, the dominance of Atwal, the 2016 winner of the Watson School’s Winship Herr Award for Excellence and Creativity in Teaching. Atwal joins Schatz and Dubnau as a two-time winner of the award thanks to his clear and organized lectures, helpful—and plentiful—office hours, and his skill at coming up with accessible examples and analogies for even the most challenging ideas. As one nominator explained, “when we asked why it is that you divide by n-1 to find the covariance, Mickey did not have an intuitive example at the time, but he thought about it in the break and returned after the break with an illustration of it on the board that explained it without digging into the math.”

As another nominator said, “Mickey was the most enthusiastic teacher we had, who always aimed to make sure we understood everything before moving on to the next topic.  He asked questions to challenge us and keep us engaged during the class and made quantitative biology thoroughly enjoyable.”

Atwal has gained further recognition for his outstanding classes through a new course he created at Cold Spring Harbor Laboratory, “QB2”. The course is open to all members of the Lab, not only Watson School students, and introduces machine learning and other advanced topics.

And so the contest continues. Will anyone step ahead and win a third time? Atwal would appear to be the only one of the three two-time winners who has a chance. Schatz has moved to Johns Hopkins. Dubnau stepped down from teaching Genetics. But even Atwal had threatened to scale back his teaching. Will the possibility of all-out Winship Herr Teaching Award dominance lure him back for another year?

It may not be easy. As one student revealed, “It was a hard decision between Mickey and Bo.”

The Watson School congratulates Dr. Mickey Atwal on his 2016 Winship Herr Teaching Award. We thank him sincerely for his enthusiasm for and excellence in teaching and his continued dedication to the mission of the School.

Past winners of the Winship Herr Award for Excellence and Creativity in Teaching are: