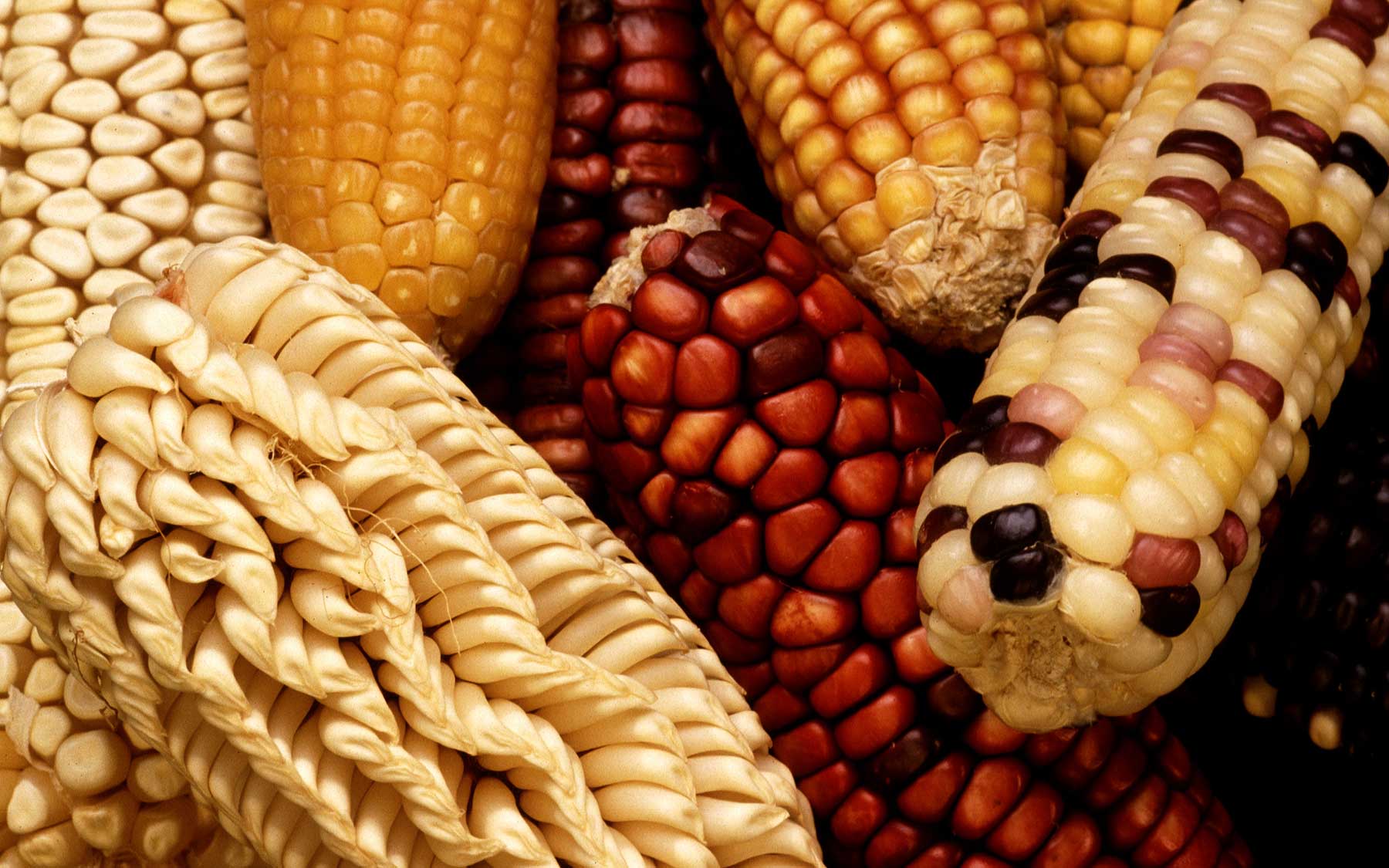 As the earth's climate warms, growing zones for the staple crops its 7 billion people depend upon will shift. The new reference genome for maize, or corn, shows that it is perhaps uniquely adaptable to changes in growing conditions. The flexibility is due to the way the genes of its 10 chromosomes can be regulated, i.e., turned on and off at particular times.
email envelop icontwitter icon share buttonfacebook icon share buttonlinkedin icon share button

Cold Spring Harbor, NY — A new, much more detailed reference genome for maize, or corn, as it is called in the U.S., will be published in Nature today. In its accounting of the sequence of DNA letters in the plant’s 10 chromosomes, the new version helps us understand as never before why maize, and not some other plant, is today the most productive and widely grown crop in the world.

Among many other things, the new sequence reveals that maize individuals are much, much less alike at the level of the genome than people are.

“Our new genome for maize shows how incredibly flexible this plant is, a characteristic that directly follows from the way its genome is organized,” says Doreen Ware, Ph.D., of Cold Spring Harbor Laboratory (CSHL) and the U.S. Department of Agriculture, who led scientists at seven academic institutions and several genome technology companies in the project.

Our new genome for maize shows how incredibly flexible this plant is, a characteristic that directly follows from the way its genome is organized.

This flexibility not only helps explain why maize has been so successful since its adaptation by agriculturalists thousands of years ago, but also bodes well for its ability to grow in new places as the earth’s climate changes, and for increasing the plant’s productivity and environmental sustainability in the U.S. and abroad.

The maize genome is large, but its size is not really what is responsible for what scientists call the plant’s “phenotypic plasticity,” i.e., the potential range in its ability to adapt. In trying to determine what possibilities are available to a plant when adapting to new or changing conditions, it is just as much the context in which genes are activated—or silenced—as the identity of the genes themselves that determines what the total set of genes enables a plant to do, Ware explains.

It is precisely this context of gene activity—variations in way the plant’s genes are regulated in different individuals across the species—that the new genome is bringing to light. By assembling a highly accurate and very detailed reference genome for an important maize line called B73, and then comparing it with genome maps for maize individuals from two other lines (W22 and Ki11), grown in different climates, the sequencing team arrived at an astonishing realization.

“Maize individuals are much, much less alike at the level of the genome than people are, for one thing,” Ware says. The genome maps of two people will each match the reference human genome at around 98% of genome positions. Humans are virtually identical, in genome terms. “But we’ve found that two maize individuals—from the W22 and Ki11 lines—each align with our new reference genome for B73 maize only 35%, on average. Their genome organization is incredibly different!”

This difference between maize individuals is a reflection “not only of changes in the sequence of the genes themselves, but also where and when genes are expressed, and at what levels,” explains Yinping Jiao, Ph.D., a postdoctoral researcher in the Ware lab and first author of the paper announcing the new genome.

It is possible to home in on these variabilities in gene expression in unprecedented detail in the new reference genome sequence. The first reference genome for maize, completed in 2009, was a major milestone, but owing to now-outdated technology, it yielded a final genome “text” more akin to a speed-reading version than one fit for close reading, says Ware.

The 2009 sequence tended to miss two things. So-called first-generation sequencing technology could not solve the great number of repetitive sequences in the maize genome, and tended to miss a significant number of spaces between genes. Because so many tiny pieces had to be stitched together to form a whole, it was particularly hard to accurately capture the many places in maize where DNA letters form long repeating sequences. Repeat sequences are especially important in maize, owing to the particular way its genome evolved over millions of years.

The new sequence makes use of what biologists call long-read sequencing, which, as the name suggests, assembles a complete genome from many fewer pieces—about 3,000 as opposed to the over 100,000 smaller pieces it took to build the 2009 reference genome. The new technology is also much cheaper; the just-completed effort cost around $150,000, compared with more than $35 million for its predecessor.

Long-read technology, by giving scientists a granular view of the space between genes in maize, sheds revealing light on how those genes are regulated, since regulatory elements are often physically situated in regions just up—or downstream from genes.

“Because of its amazing phenotypic plasticity,” concludes Ware, “so many more combinations are available to this plant. What does this mean to breeding? It means we have a very large variation in the regulatory component of most of the plant’s genes. They have lots of adaptability beyond what we see them doing now. That has huge implications for growing maize as the population increases and climate undergoes major change in the period immediately ahead of us.”

The new genome’s resolution of spaces between genes—“intergenic” regions—also makes it possible to read detailed histories from the “texts” of genomes from different maize individuals. “We want to understand how the maize genome evolved,” Ware says, “to be able to look at the genome in an individual and have it tell us a story. Why does the expression of a given gene change, and under what circumstances?”

Consider, for instance, the impact of transposons—bits of DNA that jump around in genomes. This can now be assessed with specificity not previously possible. Transposons, which are present in all genomes, were first seen and described in maize in the 1940s by CSHL Nobel laureate Barbara McClintock.

The new reference genome helps scientists understand how the history and structure of the maize genome has been determined by the action of transposons more than in most plants. When they “jump” into a position within a gene, the gene can be compromised entirely. Other times, whether a transposon has hopped into a position just before or after a gene can determine when and how much it is expressed.

While the phenomenon of “jumping genes” has been understood for decades, its impact in different individuals in various maize lines provides precisely the kind of information that can help explain the plant’s evolutionary success.

The plant’s genomic plasticity is also a boon to breeders. “Diversity in maize is the resource base for breeding,” says Jiao. “It’s the key to making better maize, and more of it, in the future.”

Employees of two companies were involved in the research and co-authored the paper: Pacific Biosciences of Menlo Park (sequencing); and BioNano Genomics of San Diego (optical mapping).