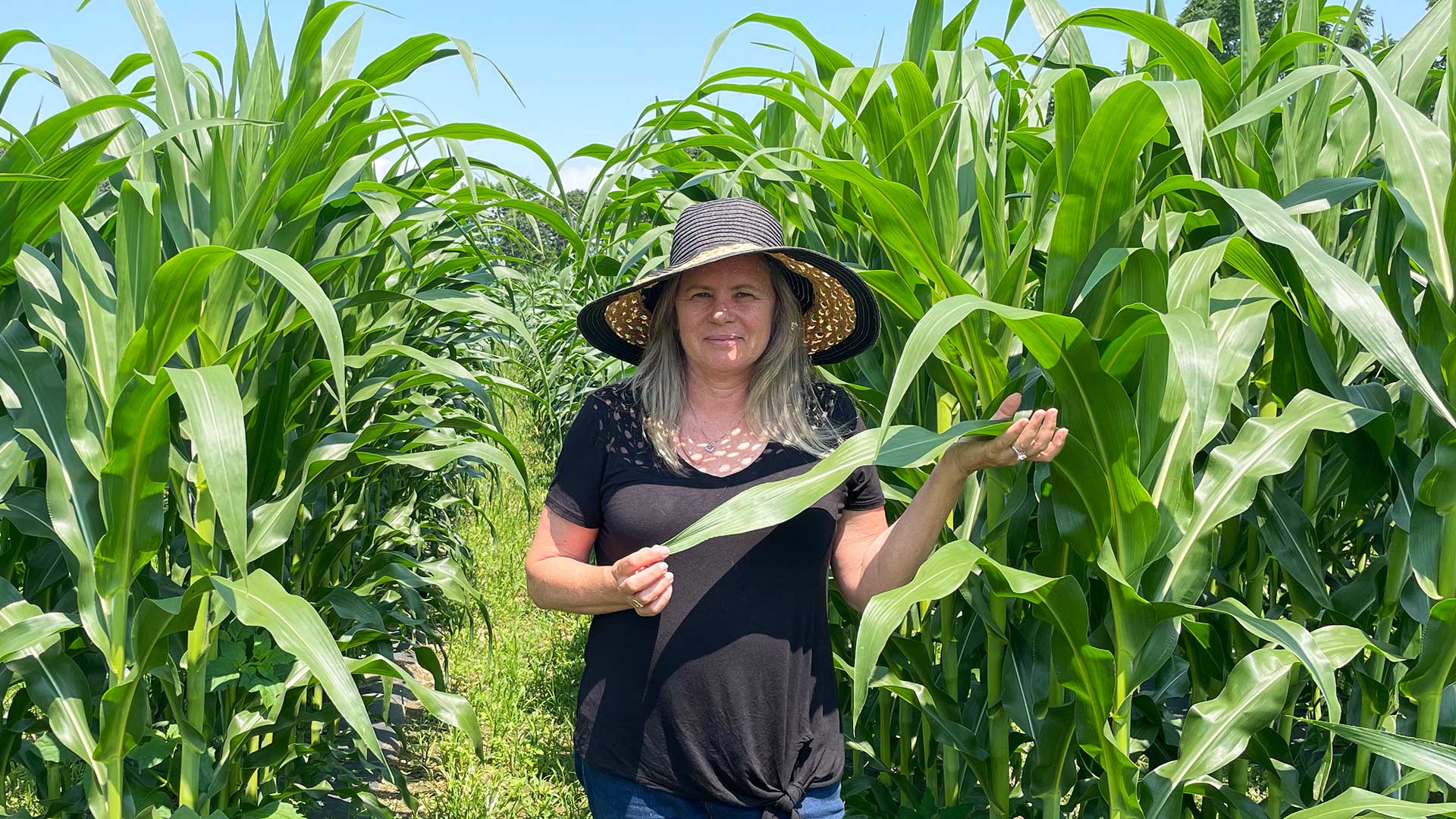 Doreen Ware is a computational and molecular biologist at the USDA Agricultural Research Service and an adjunct professor at Cold Spring Harbor Laboratory. She teases out clues in the corn genome that help her adapt the crop to a changing climate.

We may not always call it sweet corn, but we enjoy this American staple nearly daily. It’s sweet corn that we grill on the Fourth of July, charring the golden ears to get a smoky tang. It’s sweet corn that we buy at summer farmers’ markets to boil and smother in butter and salt. And it’s sweet corn that pops into our beloved crunchy comfort food we crave on movie nights. It’s the type of crop we’d like to stay healthy and plentiful. But climate change—and longer periods of wet, cool weather—can turn sweet corn to rust.

For sweet corn growers, it’s a familiar annoyance: oval-shaped, cinnamon-brown pustules, known as common rust, that appear on corn leaves and bode ill for that season’s haul. Caused by the fungus Puccinia sorghi, it is a prevalent disease for our staple of summertime picnics and backyard barbecues. In the United States and other places sweet corn is grown, it can devastate crop yields, and while we haven’t yet hit a sweet corn shortage, the disease can cost farmers a pretty penny.

Other corn varieties, which comprise about 99% of corn production in the US, aren’t impervious to disease either. They can be plagued by a list of other ills that includes southern rust, tar spot, sugarcane mosaic virus, northern corn leaf blight, and maize lethal necrosis disease. But unlike many of these other varieties grown to feed cows or make the syrup used in processed food, sweet corn, in general, is not genetically modified. Plant biologists have discovered that it’s more vulnerable to common rust than its other corn cousins. So as climate change shifts rainfall patterns, which leads to damper-than-usual conditions or flooding, and creates unseasonably fluctuating temperatures, common rust is fixing to be a bigger problem for sweet corn in the US.

Currently, conventional growers of sweet corn can use chemical fungicides, such as azoxystrobin, to fight common rust. But these chemicals can be highly toxic to animals that live in water and have the potential to harm microbial life in soil, making them less-than-ideal “fixes,” and the United States Department of Agriculture (USDA) prohibits organic sweet corn growers from using many of them. Pinpointing the genes that increase resistance to common rust can help build healthier crops. So sweet corn breeders are looking for genes they can add to their breeding lines to build in resistance to common rust.

Luckily, these breeders have an ally in Doreen Ware, a computational and molecular biologist at the USDA Agricultural Research Service, and an adjunct professor at Cold Spring Harbor Laboratory. For decades, she’s been using bioinformatics and molecular tools to map the corn genome—and, critically, making this information open source, so even public breeders with limited budgets at land grant universities can access it for free. Ware explains that in the last 20 or 25 years, scientists have been able to achieve a deeper level of granularity in their understanding of genomic structure—for corn and many other crops—due to sequencing innovations in the medical and health arenas. “We’ve been able to leverage everything that’s been done for human artificial intelligence and do it on the cheap for plants,” Ware says.

Ware’s research makes life considerably easier for agricultural scientists like William Tracy, at the University of Wisconsin-Madison’s agronomy department, who develops seeds for seed companies that eventually make their way into the hands of farmers and gardeners. Historically, Tracy would have spent seven or eight growing cycles to come up with a corn hybrid that was extra-sweet, or resistant to any one of a variety of diseases that plague the crop. He’d select two parents, mate them, pick the progeny that showed the most promising traits, mate and grow them out again, and again, and again. “Old-fashioned plant breeding is iterative,” he says. “We make a gain, then cross the things we made with that gain to make more gain.” That can take a long time.

Thanks to Ware, the present and future of breeding is quicker and a lot more precise. Her sequencing work has given Tracy access to genetic information that provides significant shortcuts in coming up with new hybrids. By being able to pinpoint valuable genetic traits and where they lie, he and his team can conduct fewer crosses and trial grow-outs in the field, reducing the number of growing cycles from eight to five or even three in some cases, and cut down on the expense and time it takes to get improved seeds into the hands of farmers. Using those tools, “I’m confident we can develop material that is going to be helpful in dealing with climate change,” Tracy says.

Ware discusses her plant genome research and its impact on agricultural challenges.

Recently, Ware co-authored a paper published in the journal Science outlining the results of her most recent work of sequencing 26 corn lines used in breeding, chosen because they represented a large swath of corn’s genetic diversity. Sequencing yielded over 103,000 different pan-genes, one-third of which were found across all 26 lines, and were dubbed as a “core set.” (Previously only 63,000 maize pan-genes had been known, so Ware’s work filled a lot of knowledge gaps.)

And among the remaining two-thirds of pan-genes—those that do not repeat across all 26 lines—lie potential answers to making corn varieties more resistant to disease.

Breeders don’t yet know what answers these particular pan-genes will offer, but they are excited about future discoveries. According to Tracy, molecular geneticists still have to figure out where any possibly important genes are located. Once they do, breeders can figure out which pan-genes, in which lines, they can cross with existing lines in order to get the desired traits.

There’s one exception, though, Tracy says. Scientists already figured out two corn lines that contain the gene rp1, which codes for the resistance to common rust. He’s looking to get a hold of one of those lines, called M37W, in order to cross it to some of his existing lines. Using this in tandem with other computational tools Ware has developed, Tracy says he can have one of his grad students “sit at a computer terminal and look at the genomic data and say, ‘Ah, these six genes are important for [disease] resistance.’” Previously, Tracy would not have had much access to information about these structural variants, but thanks to the sequencing outlined in the Science paper, that’s changing.

This newly elucidated genetic wisdom has more to offer. As Tracy gets ready to send away for the M37W seeds to cross-breed with other sweet corn lines, he awaits more genetic information that will allow him to tackle other diseases afflicting other corn varieties—from maize lethal necrosis disease to sugarcane mosaic virus to northern corn leaf blight, which he says, is becoming vastly more common with climate change.

With molecular and genomic predicting tools, I can eliminate many of the worst ones without tasting them, which means I can be faster, more precise, and not so cranky at the end of the day.”

But there’s another, seemingly frivolous but tasty, benefit to the work Ware has made available to him over the years: It’s provided him with the genotype that codes for sweetness in sweet corn. “I used to have to bite 300 ears of corn hybrids in a day to evaluate them for flavor, which gets old,” Tracy says. “With molecular and genomic predicting tools, I can eliminate many of the worst ones without tasting them, which means I can be faster, more precise, and not so cranky at the end of the day.” And at the end, the sweet corn will taste even sweeter.