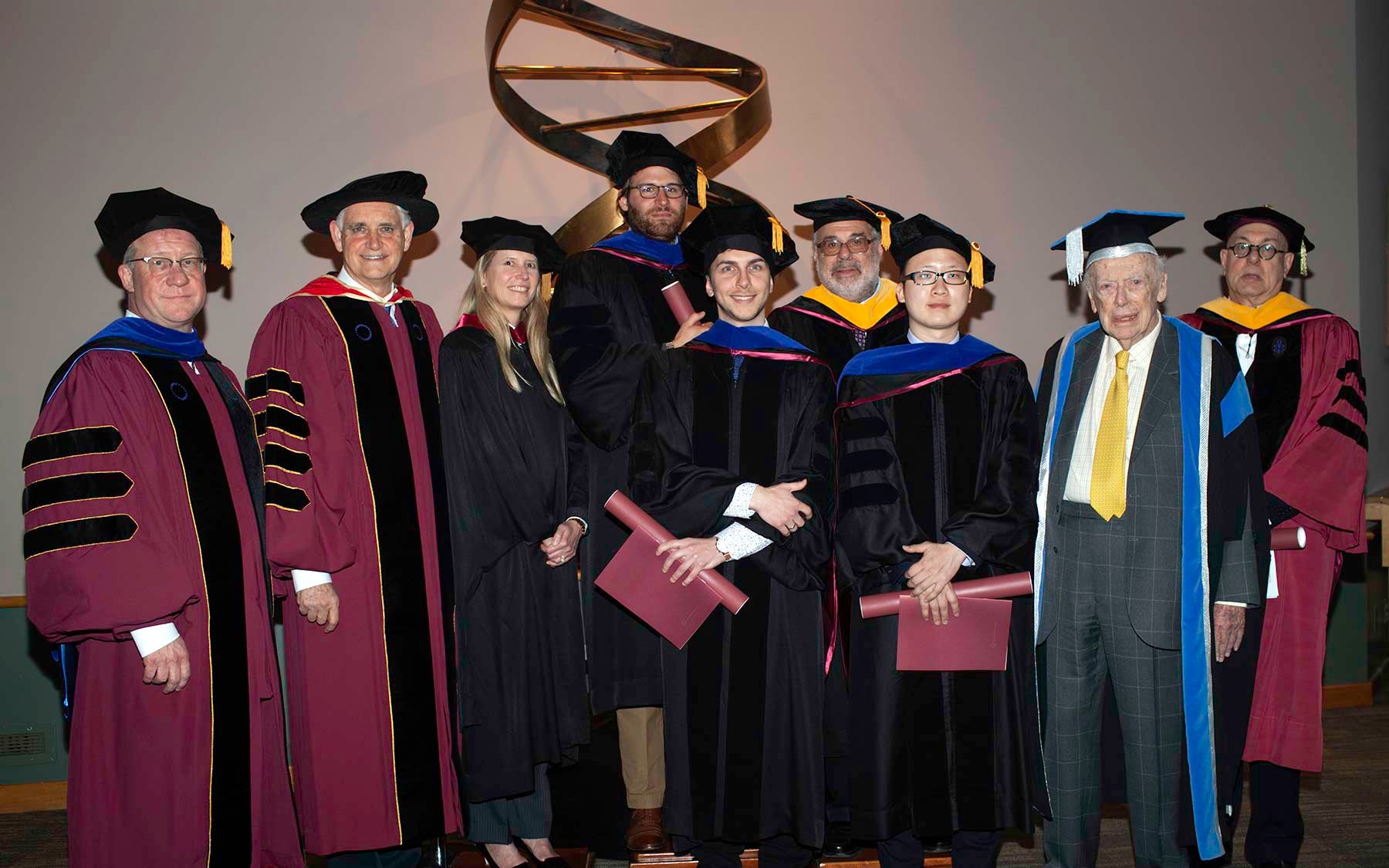 CSHL Chairman Jamie C. Nicholls, President, and CEO Dr. Bruce Stillman and WSBS Dean Dr. Alexander Gann welcomed guests in Grace Auditorium. “This is always a great occasion in the annual life of Cold Spring Harbor Laboratory, when we can celebrate these fantastic students who came to immerse themselves in a career of research and education,” said Stillman, addressing the graduating students. “Because of the training you received at the Watson School, you have a great start, and I look forward to future successes emanating from each of your careers.”

“The symmetry between outstanding research and innovative education has long been a hallmark of Cold Spring Harbor Laboratory,” said Gann. “The justly celebrated research here is a great achievement in itself, but for many decades, it has brought education to everyone from professional scientists to school children.”

“Take every opportunity to learn, teach and apply the fundamental principles,” acclaimed geneticist David Botstein advised. “No discovery or experiment is complete until it becomes knowledge for others to build on, even if it is preliminary, and don’t skimp on describing your methods. And contribute your time to maintaining the scientific community.” Dr. Botstein, currently Chief Scientific Officer at Calico, a biotech company established in 2013 by Google, was an early advocate of gene mapping and helped lay the groundwork for the Human Genome Project.

Leon Botstein is the president of Bard College and the music director of the American Symphony Orchestra. He was honored for being an outstanding educator, a remarkable academic leader, and a giant in American music. Leon Botstein’s wife and celebrated art curator Barbara Haskell also attended the ceremony.

“Since science is a form of life, do not divorce it from other modes of inquiry and conduct,” said Leon Botstein, giving his own advice to the graduates. “I have never met or known of a great scientist who has ever been really a narrow specialist, immune from a deep engagement with matters such as literature, art, politics, and history.”

CSHL Professor Zachary Lippman, a plant biologist, was honored with the Winship Herr Award for Excellence in Teaching for the second time. Named for the founding dean of the Watson School, the award is annually given to a teacher singled out by the school’s first-year students. Lippman was a graduate of the Watson School, a member of the class of 2004, and first won this prestigious award in 2014. Lippman was unable to attend the ceremony, as he was completing research in Ithaca, and accepted the award through via a video call.