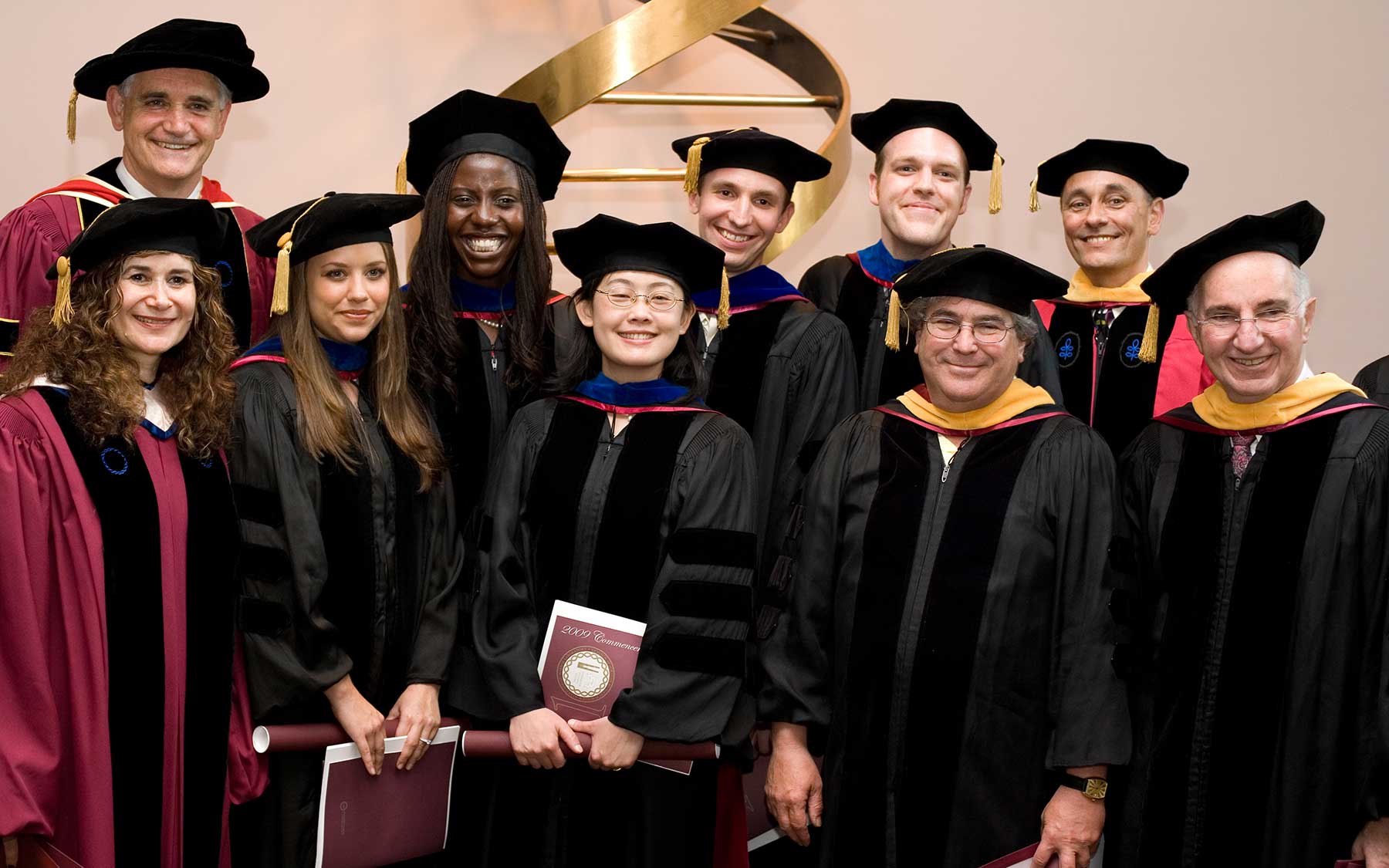 Cold Spring Harbor, NY — On Sunday, April 26, proud friends and family mingled with distinguished scientists at the sixth commencement ceremony of the Watson School of Biological Sciences (WSBS) at Cold Spring Harbor Laboratory (CSHL). The occasion, on which five outstanding young scientists were awarded the degree of Doctor of Philosophy, also served to commemorate the 10th anniversary of the Watson School’s founding.

The Watson School of Biological Sciences received accreditation in 1998 and is widely esteemed for its innovative approach to graduate education, in particular, its practice of giving students the opportunity to earn a doctoral degree in four years.

Dr. Bruce Stillman, CSHL’s president, addressed the graduating class, saying, “You are fortunate to graduate in an era in which science is again recognized by our political leaders as one of the foundations for formulating policy. I trust that, as new graduates, you will help ensure that society is educated about what scientists discover, whether you remain as experimental scientists or pursue a career in which you apply your knowledge of science in other ways.”

Those gathered in CSHL’s Grace Auditorium to celebrate the day’s milestones were welcomed with remarks by Eduardo Mestre, Chairman of the Laboratory’s Board of Trustees, and by Dr. Leemor Joshua-Tor, Dean of the Watson School. Professor Gregory Hannon, Ph.D., was honored with the Winship Herr Award for Excellence in Creativity in Teaching. Named for the founding dean of the Watson School, this award is annually given to a teacher nominated by the school’s students.

“The spectacular track record of our students and alumni is a testament to the success of our remarkable program,” said Dr. Joshua-Tor. “They are publishing well-cited papers in leading journals, have received highly competitive fellowships and awards, and six of them have started tenure-track faculty positions within four years of graduating, which is must faster than is typical for Ph.D. programs.”

The Watson School is named for Dr. James D. Watson, now chancellor emeritus. Along with the late Dr. Francis Crick, Dr. Watson is co-discoverer of the double-helical structure of DNA. The two were awarded the Nobel Prize for their discovery in 1962, along with Maurice Wilkins. In his remarks to the graduating class, Dr. Watson praised their ability to “think like scientists,” and for succeeding, even at this early stage in their careers, in undertaking and executing difficult scientific experiments of real importance.

“Jewel in the crown”

The Watson School, which Dr. Joshua-Tor called “the jewel in the crown of CSHL,” is the newest of the educational programs that have been undertaken over the Laboratory’s long history in science education. Fifty years ago, CSHL started the Undergraduate Research Program (URP), one of the nation’s oldest programs that provides college students with the experience of working and living amongst practicing scientists. Twenty years ago, CSHL fostered the development of a DNA Learning Center, which has taught many thousands of middle and high school students the secrets of molecular biology and provided them hands-on knowledge of the principles of DNA science.

At commencement this year, the Watson School conferred honorary Doctor of Science degrees on four individuals—Dr. Alfred Goldberg, David Micklos, Dr. Jeffrey Miller, and Dr. Winship Herr—each of whom have made remarkable contributions to these various programs at CSHL.

Dr. Alfred Goldberg’s relationship with CSHL dates back to the summer of 1961, when, as a Harvard sophomore, he arrived on campus to participate in the Undergraduate Research Program, then in its third year. A member of the faculty at Harvard Medical School since 1977, Dr. Goldberg has conducted research that has not only provided insight into the intracellular machinery that breaks down proteins but has also had practical impact by leading to the development of drugs that are used widely as research tools and in the treatment of certain cancers. As an alumnus and an enthusiastic supporter of the URP, he has inspired scores of students to aspire to his high standards of scientific training and research. Dr. Goldberg encouraged the graduates to stay in touch with CSHL and take advantage of its long and distinguished program of meetings and courses. “I’ve always emerged from them feeling rejuvenated and full of enthusiasm for science and new collaborations,” he said.

Since arriving at CSHL in 1982, David Micklos has played a large role in the development of its educational programs. A biologist by training and an educator at heart, Micklos in 1988 founded the Dolan DNA Learning Center (DNALC)—the world’s first science center devoted to public education on genetics—and has devoted the years since to spreading the Center’s concept around the globe. He has co-authored the very popular textbook DNA Science, and developed innovative and educative internet websites that attract more than 6 million viewers per year. He credited the success of his efforts to “a unique group of high-level scientists and engaged philanthropists reaching out to include young scientists in the seamless flow of CSHL’s history of scientific progress.”

Dr. Jeffrey Miller, a faculty member at the University of California, Los Angeles, is the acclaimed author of several outstanding books and the Experimental Protocols in Molecular Biology, a highly influential manual of scientific methods that CSHL Press published in 1972. This work paved the way for later manuals, which collectively played a pivotal role in preparing thousands of scientists to conduct experiments in the emerging field of molecular biology. “Most scientists cannot imagine how molecular biology would have developed without CSHL,” said Dr. Miller. “I congratulate all the graduates because you’ll always be able to carry with you not only the name of a great institution but also that of the great innovator, Dr. Jim Watson, on that degree.”

Dr. Winship Herr joined CSHL as a postdoctoral fellow in 1983 and made it his home for the next 22 years. While running a highly productive laboratory in a competitive field, he began, in 1995, to devote much time and effort to the end of establishing the Watson School and achieving accreditation for it in record time. As the School’s founding dean, he was been at the center of every concept and idea that has set the Watson School’s four-year program apart from programs at other institutions. In his keynote address, Dr. Herr exhorted the new graduates to practice every aspect of their graduate training, particularly their ability to communicate their work to others. “This aspect is essential to you graduates in becoming leaders, and to shepherd society into times in which biology will have an ever-increasing impact,” he said. “It is through all of you that the Watson School can sustain its motto, ‘Prevail through knowledge’.”