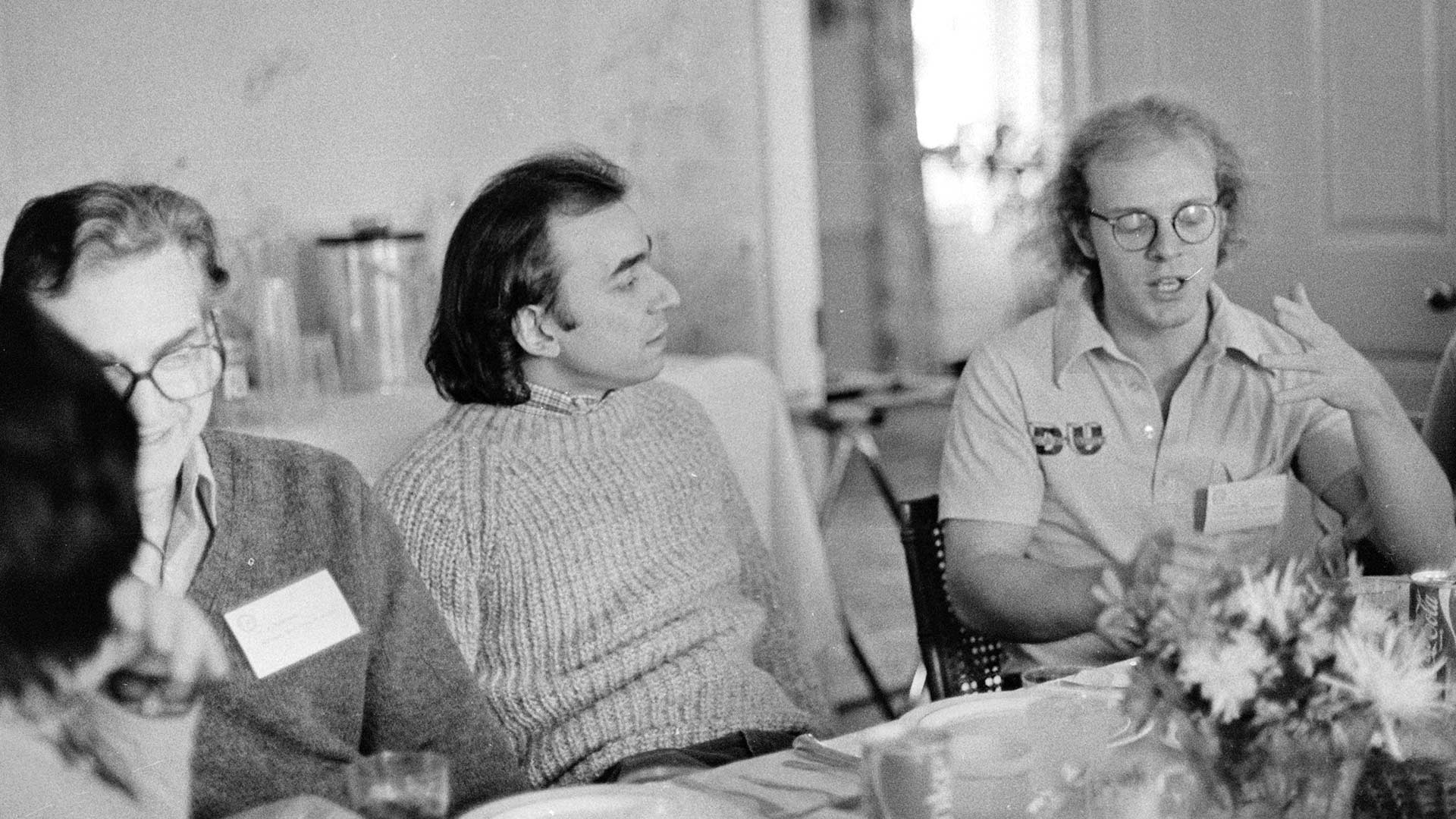 Marshall Nirenberg, Ron McKay, and Greg Lemke at the 1980 Usage of Monoclonal Antibodies in Neurobiology meeting.

What does Dr. Ardem Patapoutian, one of this year’s co-winners of the Nobel Prize in Physiology or Medicine, have in common with James Rothman, Randy Schekman, and 7 other Nobel laureates? They all attended one of Cold Spring Harbor Laboratory’s (CSHL) courses! According to Dr. David Stewart, Executive Director of the Meetings and Courses Program, “Dr. Patapoutian’s recent win brings us up to 10 laureates who have participated as a trainee in one of our courses.” Of this list, Dr. Patapoutian is the second Nobel laureate to have taken a CSHL course at the Banbury estate. Every summer, the Banbury Center pauses meetings so that the Meetings & Courses Program can convene students and instructors on the estate. Unlike courses held at CSHL’s main campus in Cold Spring Harbor, which are usually larger and may involve “wet” lab work, courses held at the Banbury campus instead prioritize smaller, lecture- and discussion-based gatherings.

Dr. Patapoutian visited Banbury in 1995, participating in the developmental neurobiology course taught by Dr. Greg Lemke, Professor in the Molecular Neurobiology Laboratory and the Françoise Gilot-Salk Chair at the Salk Institute. According to Dr. Lemke, “It was a time when developmental neurobiology was a very active field of science…There was a lot of new science that was introduced during that course that wasn’t even published yet.”

As a neurobiologist and an immunologist, Dr. Lemke and his lab’s current work involves receptor tyrosine kinase signaling in the nervous and immune systems. “Over the last 10 years or so,” Dr. Lemke explained, “we focused on this family of receptor tyrosine kinases called TAM receptors, which were originally discovered in my lab back in the 1990s.” TAM receptors can be found in many different cell types, but Dr. Lemke is particularly interested in their dual roles in macrophage recognition of apoptotic cells and as feedback inhibitors of immune responses.

Dr. Lemke’s first experience with the Banbury Center, though, came much earlier, when he was a graduate student in 1980. Attending as a “pinch-hitter” substitute for his advisor, the “Usage of Monoclonal Antibodies in Neurobiology” meeting was also one of the first scientific conferences that Dr. Lemke ever attended. He participated in the meeting alongside Nobel laureates such as Marshall Nirenberg, as well as the future President of MIT, Susan Hockfield.

Since then, Dr. Lemke has attended or organized other Banbury meetings and, starting in the mid-90s, he began to teach his own 2-week-long developmental neurobiology course at Banbury alongside Dennis O’Leary. “I actually really, really enjoyed it,” Dr. Lemke recalled. “We used to invite a different speaker a day and that speaker would have basically the whole day to talk about their stuff. We invited the top folks in developmental neurobiology at the time and I think it was a great experience for the students.” The goal of the course was to get students to think about cutting-edge science and possible applications between different branches of science.

Dr. Lemke remembered one student, a post-doctoral fellow who was interested in how olfactory receptor neurons’ axons grew into the olfactory bulb, what routes they take, and how they were organized: “We had one speaker who was just developing reagents that would allow you to visualize the growth of any axon…The student said, ‘I wonder if I can try to do that in a mouse with an olfactory receptor gene’…The speaker is talking about this and he hasn’t published his paper yet; it came out three months later. The student had access to the idea, he got the reagent from the speaker, he did the experiment, and he made a spectacular observation.” In that experiment, the student stained the promoter of a specific olfactory receptor gene expressed in a small number of neurons scattered throughout the nose. He found that all of those axons converge on and innervate a single glomerulus. Today, this observation is considered fundamental to olfactory neurobiology but it would not have been possible if that student hadn’t attended the developmental neurobiology course and met with this speaker.

“Banbury is a special place…but in terms of the nature of the courses and the nature of the meetings, they are quite unusual. They are very small…they are very valuable from that standpoint…You brought these people from all over the world…there is a lot of opportunity to explore and they tend to be at the cutting edge. There’s not a lot of other places like that,” said Dr. Lemke.

Dr. Stewart added, “We are proud to play a role in teaching and shaping experts in a wide variety of disciplines, past, present, and future.”