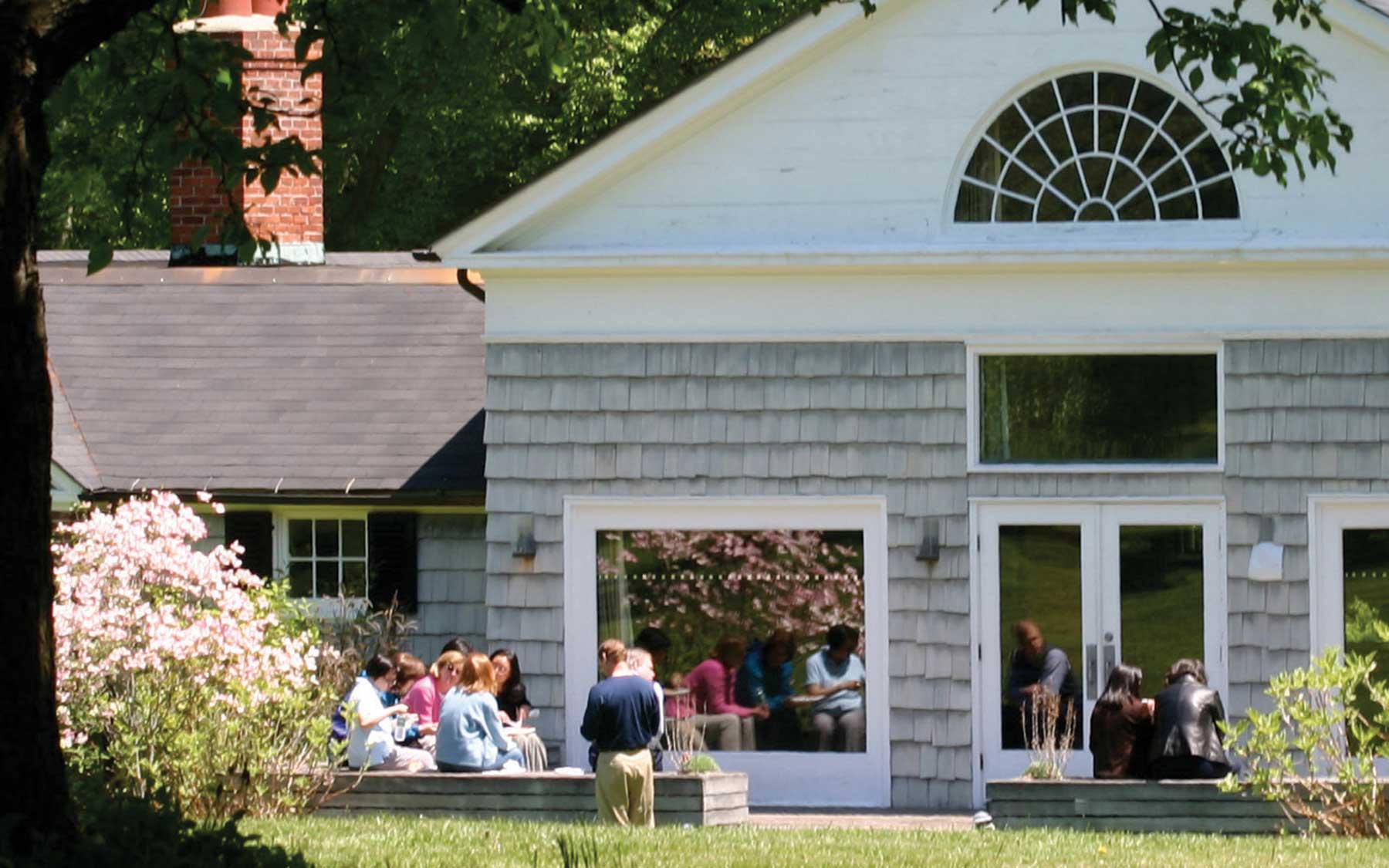 What appears to be a few elegant houses tucked in the woods by the harbor is actually an epicenter of ideas in biology, from the iconic Human Genome Project in the late 1980s to the more down-to-earth subject of Lyme disease at this recent meeting.

Maybe it’s no surprise that the Banbury Center has gained a reputation as being secretive. It’s almost as if it’s in disguise—the lush, picturesque estate blends in with its residential surroundings in the Lloyd Harbor section of Long Island. But what appears to be a few elegant houses tucked in the woods by the harbor is actually an epicenter of ideas in biology, from the iconic Human Genome Project in the late 1980s to the more down-to-earth subject of Lyme disease at this recent meeting.

Adding to its mysterious air, Banbury is the kind of place where “what’s said in the room stays in the room,” as Lyme disease researcher and physician Steven Schutzer puts it. But talking with Schutzer, who’s been to more Banbury meetings than almost anyone else at the Lyme meeting, it was clear that what keeps him coming back is not its capacity for secrecy, but for openness.

“It’s not like a secret plan,” Schutzer says. The guardedness, rather, is because “people are told to come to this meeting with results from experiments they may have just performed the day before”—results so new and un-vetted that it would be irresponsible to publicize them.  Leaking of preliminary results can also threaten publishing them in a journal later on. But rather than keep new results completely to themselves, scientists who attend Banbury meetings can have other experts weigh in on their work at a critical early stage.

Banbury is where scientists go when they urgently need to make real progress and know that they can’t do it alone. That’s how Schutzer felt when he reached out to Jan Witkowski, the recently retired director of Banbury, about organizing the first meeting on Lyme. More than 25,000 cases were reported to the CDC in 2014 alone. If left untreated, Lyme can cause severe pain, facial paralysis, brain inflammation, and a range of other serious symptoms. More Banbury meetings have focused on Lyme than any other topic, with this latest meeting focusing on early detection strategies.

As the 10th convocation on Lyme just ended, Schutzer and his colleagues felt they had arrived at the point where they could turn their hard work into a solution for the public. They’ve been working for years on techniques that make it possible to diagnose Lyme earlier in hard-to-detect cases, so at this meeting they brought in representatives from key governmental organizations. “We’re making significant strides and the input of CDC and FDA is going to help us bring these things to the public,” explains Ray Dattwyler, also a Lyme disease researcher and physician.

Schutzer recalls instances where scientists who didn’t have access to Lyme disease patients connected at Banbury with physicians who could easily obtain the samples needed to advance their research. “If you look at the list of who attended and then you look at the literature, you might find that a lot of those people started collaborating together and helped move the field forward,” he says.

This phenomenon extends beyond biomedical research, even into fields as seemingly distant as forensics. In a commentary piece called “DNA fingerprinting on trial,” (pdf) published in Nature in 1989, renowned biologist Eric Lander describes how innocent people could be charged with serious crimes like murder due to improper use of DNA forensics. In the past year, Lander had served as an advisor for the defense in one trial and investigated several other DNA fingerprinting cases on behalf of the U.S. Office of Technology Assessment. He goes on to note in the 1989 article that, “both projects arose as unintended consequences of accepting an invitation to a conference on DNA forensics at Cold Spring Harbor’s Banbury Center in late 1988.”

The word “unintended” says a lot about how Banbury operates. Sometimes these connections are made in the conference room itself, but Schutzer describes “people talking during meals or after dinner” as “equally important as what’s said in that conference room.” Since it’s such a welcoming and beautiful place, “unlike going in with a suit on in a regular meeting that’s maybe in a hotel or a convention center, people already come in relaxed, so things move forward more quickly,” Schutzer says.

In this way, gatherings at Banbury are part meeting, part retreat. If Banbury has a real secret, it’s a seemingly magical ability to bring joy and serenity to people who are tackling some of the thorniest subjects in the life sciences.