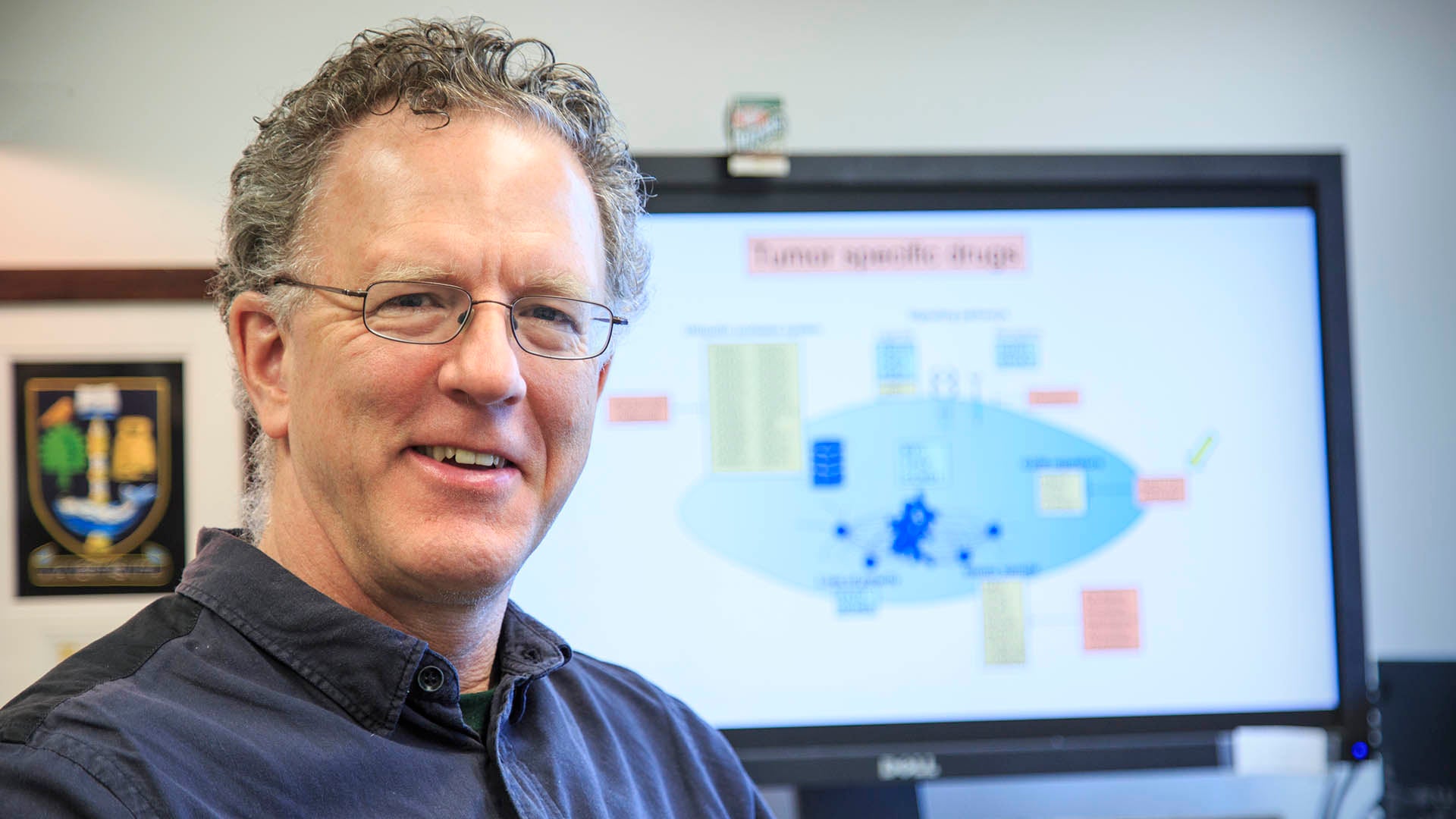 Dr. Chris Kemp in his office at the Fred Hutchinson Cancer Research Center in Seattle, Washington on April 4, 2018.

Last month, the Banbury Center held its “CSHL Technology and Education Council: Challenges and Promise in Precision Medicine” meeting (February 18-20). During this time, I was able to meet with Christopher Kemp, Ph.D., and learn about the oncology research he performs and how he’s hoping to make a difference through it. Dr. Kemp, a Full Member at the Fred Hutchinson Cancer Research Center in Seattle, WA, received his doctorate in oncology from the University of Wisconsin–Madison.

Can you tell me about what you do in two sentences?

What inspired you to get into this type of work?

At age 6, my mother passed away from colon cancer, so that set my course. Then my dad got remarried to a nurse, who got me interested in biology, which I then pursued in college. Curing cancer was my lifelong dream, so I obtained a Ph.D. in oncology and then did post-doc work in cancer research. Another inspiration was Rachel Carson, whose book, Silent Spring, I read when I was younger, and that got me interested in environmental causes of cancer. That kind of brought it all together; particularly that book helped me focus on identifying the causes of cancer.

For many years I remained focused on identifying key rate limiting steps to the origin and progression of cancer. Ten years ago, my stepmother became sick with cancer and she also passed away. I told myself “OK, I’m not making enough progress fast enough. I think we know enough about what causes cancer, let’s try and figure out how we can cure it.” At this time, I met Carla Grandori, who introduced me to a technology that uses high-throughput screening, robotics, and computational resources, and together we immediately saw the power of it to identify new cancer targets in a really broad way. My whole lab direction switched from understanding what causes cancer to how might we treat or even cure cancer. To enable this new research direction, we formed a nonprofit called Cure First, whose mission is to make this high-throughput technology available to researchers and even cancer patients to dramatically speed up the discovery of new cancer therapies. Meanwhile, we joined forces with other like-minded colleagues to establish a second nonprofit, the Society for Functional Precision Medicine, whose mission is to enable functional testing in the clinical setting. Based on lots of feedback and encouragement from many friends and colleagues, this, in turn, motivated us to found a startup company called SEngine Precision Medicine, which Carla now leads. A core mission of SEngine is to provide a functional drug test using patient tumor derived organoids to help guide their therapy. SEngine is also developing novel drugs to precisely target cancer vulnerabilities.

What is the impact you’re hoping the work you do is going to have?

The potential of identifying novel drug targets and candidate drug combinations using high-throughput testing of personalized cancer models has far-reaching potential. I like to use this analogy: Our current view of the functional wiring of cancer cells is equivalent to that of Portuguese maps of the world from the 15th century. From one high-throughput siRNA screen (actually thousands of experiments done in parallel) we can identify hundreds of druggable targets for a given cancer type. In less than two weeks. This is like a 15th century explorer suddenly having access to Google Earth, so you can imagine the challenge is to decide what to pursue. We have found tremendous enthusiasm from young scientists, colleagues, and oncologists who wish to use this technology to advance their specific question or clinical need. This, in turn, will create an ever-expanding web of influence, which we hope will continue after we are done and gone.

A much broader and concerted effort is needed to facilitate wider adoption of functional testing, including buy-in from the medical community, the pharmaceutical industry, insurance companies, and regulators. Not surprisingly, because the concept is very simple and logical, cancer patients are really enthusiastic and supportive. Let’s identify better therapies for cancer patients today instead of waiting for tomorrow.

What is your favorite aspect of what you do? What gets you excited to go to work?

Five years ago, I would have no clue how I might approach targeting or treating cancer. Now, we have very detailed maps of the targetable vulnerabilities of cancers. We know what genes to target in order to kill cancer cells specifically and we are starting to understand the underlying signaling pathways. It’s really exciting to figure out what gene to focus on, how it works, and how to develop a therapy. Charles Darwin’s Voyage of the Beagle is one of my favorite books, and to me the feeling is similar. It really is like being the first human to explore a new continent.

Can you tell me about a time when you just had fun while working?

The funnest times I’ve had are with colleagues in exotic (or sometimes not so exotic) locations. I am lucky to have an international network of colleagues/friends that I can see maybe once a year at meetings. Interacting with really smart, creative people and having wonderful social experiences as we work together to solve these big problems. I feel really fortunate to be part of the science world that allows me to do that.

Could you tell me about the most impactful mentor you’ve had and why they made a difference?

That’s pretty easy. His name is Charles Warren. He was a professor in the Department of Fisheries and Wildlife at Oregon State University. He was near retirement, so he didn’t need to kowtow to the Establishment. He encouraged us to think about high-level approaches to science. He taught two semesters on the philosophy of science and why scientists do what they do, what is truth, and what is accepted as scientific fact, and that really made me think deeply about how I approach science. He taught me how to ask the right questions and to think about which experiment you’re going to do that’s going to answer that question and to hopefully have a big, long-lasting impact. In the best case, to change the way we think about and view the world. This is what theories and hypotheses do—they change the way we assemble disparate and confusing observations into an overall conceptual framework that makes sense through the lens of a theory. His class assignment, for example, was to come up with a new theory of biology and how would you defend that theory. I’ve never seen anything like that in any of my other professors. I’ve had other great mentors, but Dr. Warren was pretty unique.

If you’ve ever played a mentor role to others, what is important to you to get across to them?

Follow your own path. It’s your life, it’s your career, it’s your education, you decide what you want to do. I don’t want to dictate to you how I think you should operate because everyone is different, has different backgrounds, and different preconceptions. I give people a lot of freedom to express themselves and do what’s right for them. If I can help them achieve that, that’s great.

What is the most defining moment of your career?

It was the time I developed an autoradiograph of a Southern blot, during my post doc in Glasgow, Scotland. I remember distinctly it was Christmas Eve because no one was in the lab. The Southern blot was from DNA extracted from tumors in mice and was the culmination of about two years of work. At the time, the tumor suppressor gene p53 was all the rage and the experiment I set up asked when during tumor development did p53 play a role. The answer, I saw immediately as the autoradiograph was developed, was as clear as a bell. The p53 gene was lost as tumors progressed from a benign stage to a malignant, invasive, and metastatic stage, but not before. P53 inhibits malignant tumor progression. I had just witnessed tumor evolution in progress, but I had no one to share the excitement with because the lab was empty! I immediately knew I could do this type of experiment again and again in different settings with different genes to great effect, and this effectively set me on my career path.