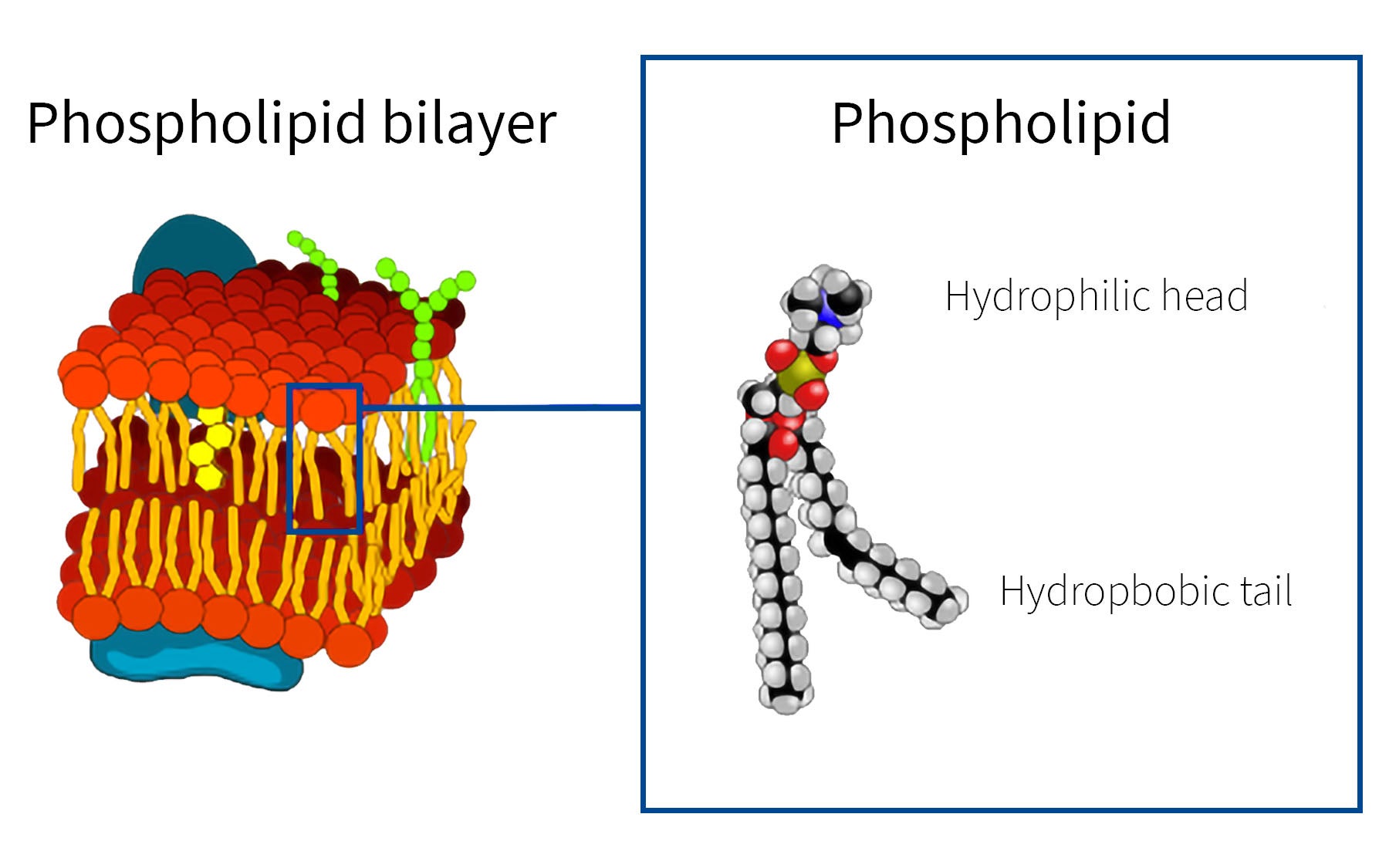 In the two-layered membrane that separates the contents of a eukaryotic cell from the surrounding environment, phospholipid molecules with water-friendly 'heads' line up to form the membrane's inner and outer surfaces. Long chains of fatty lipids—averse to water—anchor the heads in place from opposing sides of the membrane, as roots anchor teeth in our gums. CSHL researchers have discovered that in a subset of membrane phospholipids (called PIs or phosphatidylinositides), the length of the lipid anchoring chain varies by 2 to 4 carbon atoms in cells with mutations in a key tumor suppressor gene, p53. A test to detect these shorter fatty acid 'tails' in the cell membrane could be an aid to cancer surgeons. Credit: Wikimedia Commons
email envelop icontwitter icon share buttonfacebook icon share buttonlinkedin icon share button

Researchers at Cold Spring Harbor Laboratory (CSHL) today report the discovery of a novel cellular biomarker that could make it comparatively easy for cancer surgeons.

Cold Spring Harbor, NY — Researchers at Cold Spring Harbor Laboratory (CSHL) today report the discovery of a novel cellular biomarker that could make it comparatively easy for cancer surgeons to determine if a patient has a potentially lethal mutation in a protein called p53, the most powerful of the body’s natural tumor suppressors and often called “the guardian of the genome.”

The p53 gene, and the protein it encodes with the same name, are mutated in many types of cancer, and notably in most late-stage cancers. Knowing the “p53 status” of cells in a tumor being treated surgically can help pathologists determine where to remove tissue and where to spare it.

This, and the fact that the new biomarker can be used to assess p53 status in as little as 15 minutes, makes it especially valuable. In contrast, performing genetic sequencing on tissue samples would take days, and at least for now is not an option for a team in the middle of a surgical procedure.

The biomarker’s identity surprised the team, which was led by CSHL Associate Professors Lloyd Trotman and Darryl Pappin. The key insight, which they describe in a paper in Cell Reports, is the length of an anchoring chain that holds an important signaling molecule called PI (phosphatidylinositide) in position in the inner membrane of cells.

The anchoring chain becomes slightly shorter than normal when p53 is mutated. The difference—a matter, the team found, of either 2 or 4 carbon atoms—can be detected via mass spectrometry, a technique that can finely parse constituents of a sample by assessing their relative molecular weights. Many large hospitals have the ability to perform “mass-spec” analysis on samples delivered directly from operating rooms while procedures are in progress.

Like most other scientists interested in cancers controlled by PI molecules, Trotman originally set out to closely study not its anchoring “tail” but rather the “head” of the molecule, which was discovered 15 years ago to be the cellular equivalent of an important traffic signal.  When large molecules like growth hormone or insulin (which are too large to enter cells) dock at receptors on the cell surface, they set off a cascade of events inside the cell membrane, beginning with signaling devices like the PI molecule. Trotman compares it to a traffic light, in part because it has three open “positions” at which other signaling molecules can dock, leading to further signal propagation inside the cell.  Much attention has been focused on the 3rd position, the spot on the “head” of PI which is dysregulated in most if not all cancers and a common point from which abnormal growth signals are sent in many diseases.

The unexpected insight for the multidisciplinary team was that the length of the fatty-acid “lamp-post” that supports the traffic light-like “head” of the PI molecule varied in cells that were cancerous. In addition to Trotman, a cancer researcher, and Pappin, a mass spectrometry authority, Adam Naguib, a postdoctoral investigator in the Trotman lab  conducted many of the experiments with Gyula Bencze, a mass-spec expert in Pappin’s lab. CSHL Professor David Tuveson, deputy director of the CSHL Cancer Center, and his team, also played an important part in the research.

Meticulous experiments demonstrated that the PI “lamp-posts” were normal in some cancers; that they were also of normal length in cells in which p53 was deleted entirely; but that they were consistently shorter, by 2 or 4 carbon atoms, in pancreatic cancer cells from a mouse model in which p53 was mutated. It is possible that other cancer-causing mutations might affect the length, too—a question to be explored in future research.

“What we would like to find out now,” says Trotman, “is whether the p53-induced changes in the PI molecule are important in either making or maintaining the cancer state. If so, then in addition to p53 mutations, there may be other ways for cancer cells to generate the same or related changes. We will be looking for this in tissue samples from cancer patients.”