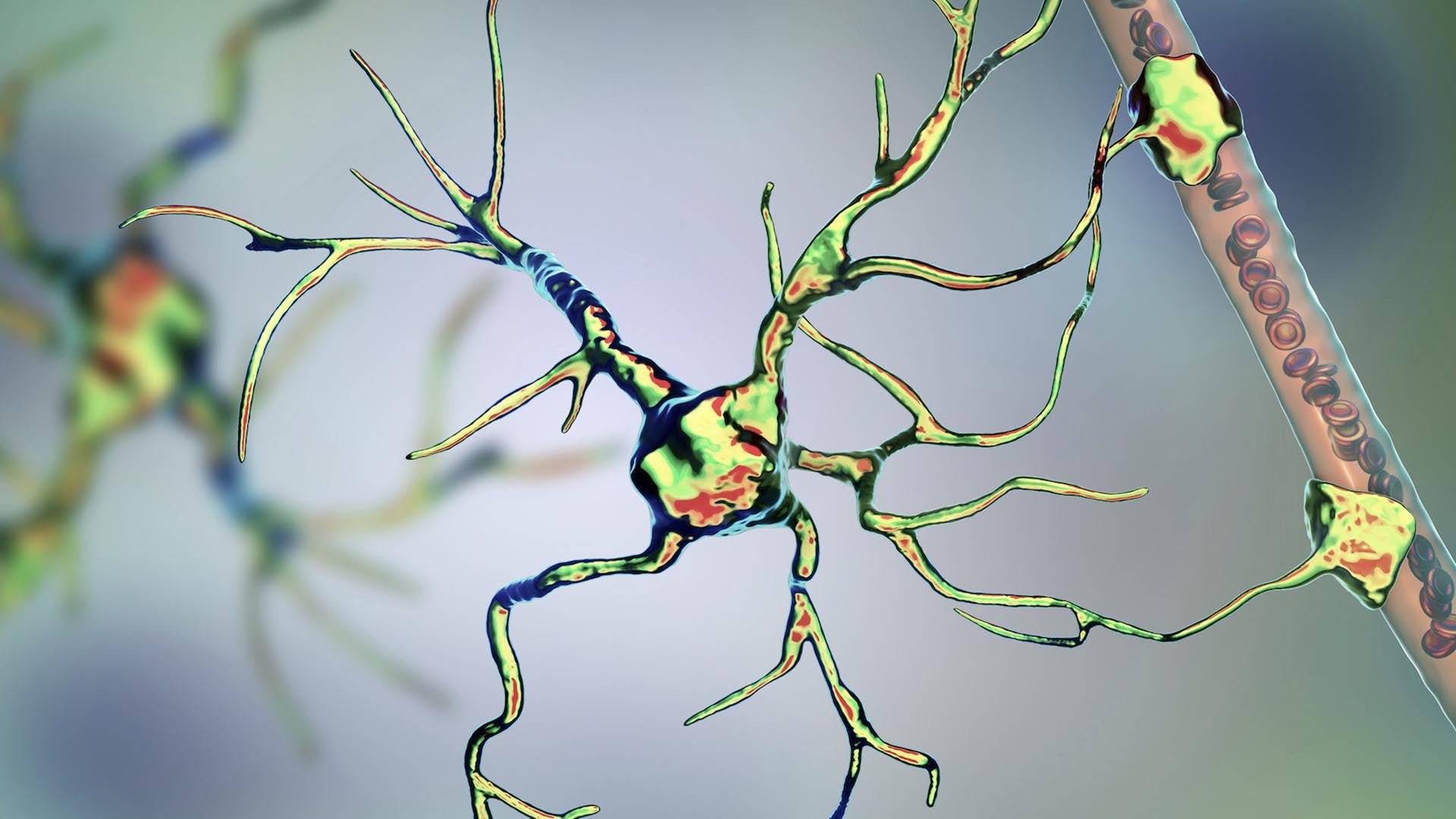 Pictured here is an astrocyte, one type of brain cell that plays a role in ALS, the degenerative disease that scientists suspect might be caused by ancient viruses in our DNA. Illustration by Kateryna Kon.

Half of your genome started out as an infection; if left unchecked, some parts of it can turn deadly all over again.

The human genome contains billions of pieces of information and around 22,000 genes, but not all of it is, strictly speaking, human. Eight percent of our DNA consists of remnants of ancient viruses, and another 40 percent is made up of repetitive strings of genetic letters that is also thought to have a viral origin. Those extensive viral regions are much more than evolutionary relics: They may be deeply involved with a wide range of diseases including multiple sclerosis, hemophilia, and amyotrophic lateral sclerosis (ALS), along with certain types of dementia and cancer.

For many years, biologists had little understanding of how that connection worked—so little that they came to refer to the viral part of our DNA as dark matter within the genome. “They just meant they didn’t know what it was or what it did,” explains Molly Gale Hammell, an associate professor at Cold Spring Harbor Laboratory. It became evident that the virus-related sections of the genetic code do not participate in the normal construction and regulation of the body. But in that case, how do they contribute to disease?

Eight percent of our DNA consists of remnants of ancient viruses, and another 40 percent is made up of repetitive strings of genetic letters that is also thought to have a viral origin.”

An early clue came from the pioneering geneticist Barbara McClintock, who spent much of her career at CSHL. In the 1940s, long before the decoding of the human genome, she realized that some stretches of our DNA behave like infectious invaders. These DNA chunks can move around through the genome, copying and pasting themselves wherever they see fit, which inspired McClintock to call them “jumping genes.” Her once-controversial idea earned her a Nobel Prize in 1983.

Geneticists have since determined that jumping genes originate in the viral portion of the genome. Many of these genes turn out to be benign or even helpful. “But some of the things are full-on parasites,” Hammell says, like infections embedded within our own DNA. All it takes to set these bad actors loose, she is finding, is a slip-up in the body’s mechanisms that normally prevent the genes from jumping around and causing harm.

Much of the research on the connection between jumping genes and disease has focused on natural molecules in the body that immobilize the genes by blocking their sequences from being read or copied. In recent years, Hammell and a number of scientists have focused specifically on a once-obscure protein known as TDP-43, which is highly adept at latching onto and hiding stretches of DNA.

Avi Nath, the clinical director of the National Institute for Neurological Disease and Stroke, helped draw attention to the importance of TDP-43 starting a decade ago. While studying a group of HIV-positive patients with ALS-like symptoms, Nath found that the anti-HIV drugs they were taking were also improving their ALS symptoms. He suspected that the drugs designed to fight the HIV virus were also suppressing the virus-like activity from jumping genes.

Subsequent work by Nath and others bolstered that idea, identifying a specific group of viral relics that seemed to be associated with dead neurons in the brains of ALS patients. A study led by biochemist Wenxue Li, now at Yale University, further showed that the ancient viruses in question interacts strongly with TDP-43.

At this point, the puzzle pieces began to fall into place. Medical researchers already knew that nearly all ALS patients experience a severe TDP-43 malfunction that causes large amounts of that protein to build up in their neurons, where it forms toxic clumps. Now it appears that TDP-43 could contribute to ALS in another way: The faulty form of the protein might no longer be able to hold back critical nerve-killing jumping genes.

Over the past two years, Hammell has confirmed that the normal form of TDP-43 suppresses harmful activity (pdf) from jumping genes in mice and humans. Other researchers have found that TDP-43 malfunction is also associated with certain types of Alzheimer’s and dementia.

The case is still not completely solved. Hammell and Nath cannot yet say for certain whether jumping genes cause ALS in some patients, or whether their activity is a byproduct of the way that ALS progresses. But either way, researchers have an important new goal in treating neurodegenerative disease: taming the non-human portion of our genome.

For more about the science underway at Cold Spring Harbor Laboratory and the rest of the world, please visit the new Biology+Beyond channel on Nautilus.