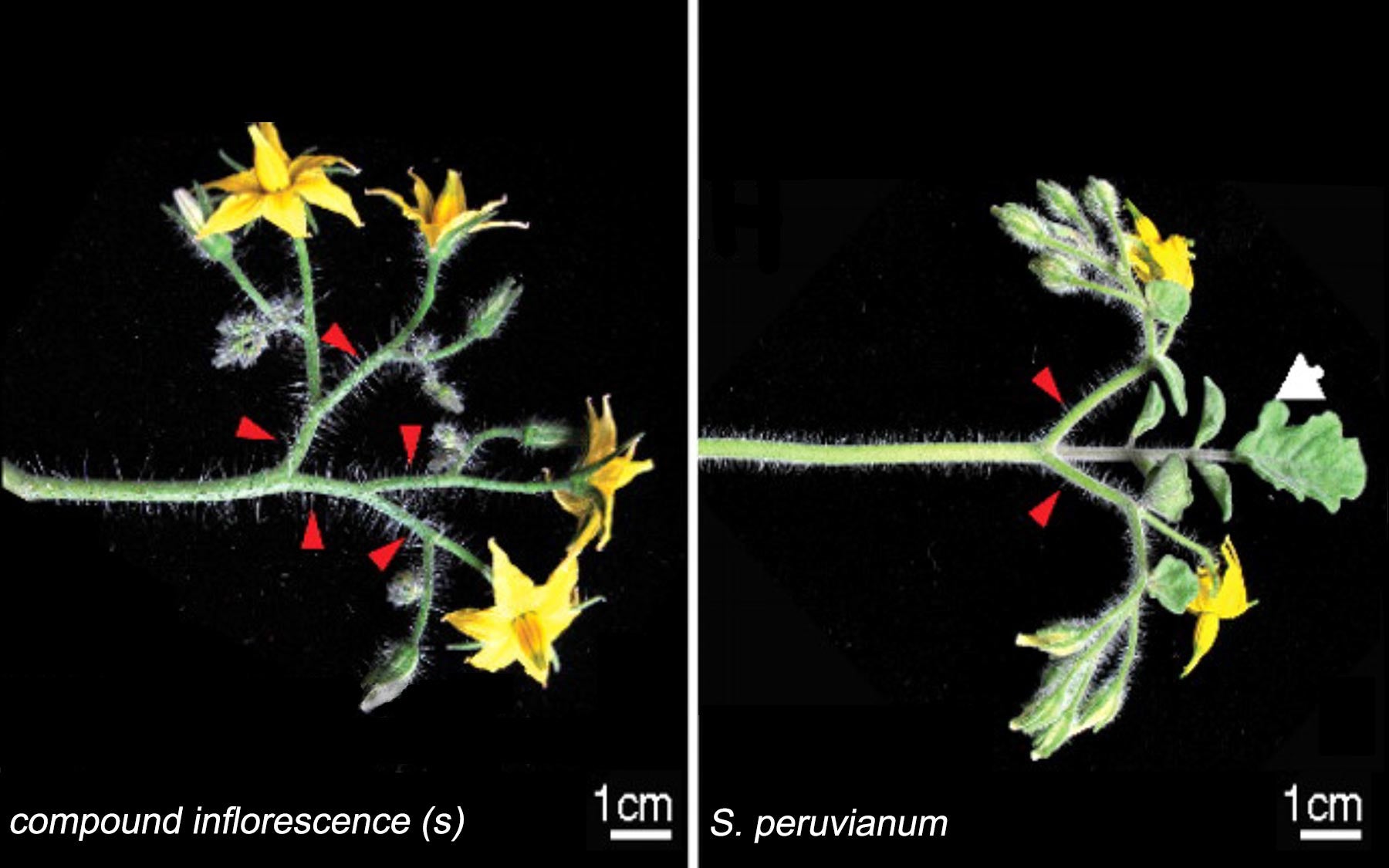 Cold Spring Harbor, NY — The secret to pushing tomato plants to produce more fruit might not lie in an extra dose of Miracle-Gro. Instead, new research from Cold Spring Harbor Laboratory (CSHL) suggests that an increase in fruit yield might be achieved by manipulating a molecular timer or so-called “maturation clock” that determines the number of branches that make flowers, called inflorescences.

“We have found that a delay in this clock causes more branching to occur in the inflorescences, which in turn results in more flowers and ultimately, more fruits,” says CSHL Assistant Professor Zach Lippman, who led the research team. The new study, which involved a high-resolution, genome-level comparison of the stem cell populations from three tomato varieties that each have different branching architectures, will appear online in The Proceedings of the National Academy of Sciences during the week of December 26.

When a plant is ready to flower, populations of stem cells, called shoot apical meristems, which are found in the growing tips, stop producing leaves and begin producing flowers by transforming into “inflorescence meristems.” Depending on the tomato variety, inflorescences meristems can make just one branch with a few flowers (that will turn into fruit) and arranged in the familiar, photogenic zigzag pattern, or multiple branches with dozens of flowers, as seen in closely-related wild relatives of tomatoes, which are native to South America.

Although most domesticated varieties, which have been bred to produce edible, delicious fruit, produce a single inflorescence branch with just a few flowers, some varieties make dozens of branches bearing hundreds of flowers. “Although one might think that all this branching is good, too much branching is not a desirable trait, because the plant spends so much energy on making flowers on those branches that it ends up not having the resources to set those flowers into fruits,” explains Lippman. “So there needs to be a balance, which the wild relatives of tomatoes seem to have achieved.”

Previous studies hypothesized that extreme branching might be the result of a pause or a delay in the maturation of inflorescence meristems, causing them to sprout extra branches instead of ending their growth by making flowers. “Our previous work, as well as those of others, hinted at the existence of a timer or clock,” Lippman notes. “We wanted to define this clock at the highest resolution, in terms of the genes that modulate the rate of meristem maturation, with the idea that finding the genes that define the clock would enable us to tweak it to get the desired level of branching.”

Using a systems biology approach and next-generation sequencing technology to “capture” the transcriptome—the activity of all the genes in a genome—of stem cells at five different stages of maturation, the team identified nearly 4000 genes that represent the clock. With help from CSHL associate professor and computational biologist Michael Schatz, the team, which included post-doctoral researchers Soon-ju Park and Ke Jiang, compared the clocks of a mutant variety that undergoes extreme branching and a wild relative from Peru that undergoes modest branching.

This analysis revealed that subtle differences in the activity of the clock’s genes could alter branching architecture. “Our data showed that wild relatives of tomato have evolved to have a slight delay in maturation, which leads to just a few more branches and a doubling of the number of flowers and fruits compared to what is typically found on cultivated tomatoes grown for ketchup or in the home garden,” explains Lippman, who is enthusiastic about the implications of this work and the next steps that his team will take. “We now have a master list of candidate genes that we can go after to manipulate the clock in order to make domesticated tomatoes produce a branching architecture that’s similar to the wild variety,” he says.

“The rate of meristem maturation determines inflorescence architecture in tomato” appears in the online early edition of The Proceedings of the National Academy of Sciences during the week of December 26. The full citation is: Soon Ju park, Ke Jiang, Michael C. Schatz and Zachary B. Lippman. The paper can be downloaded at: www.pnas.org.