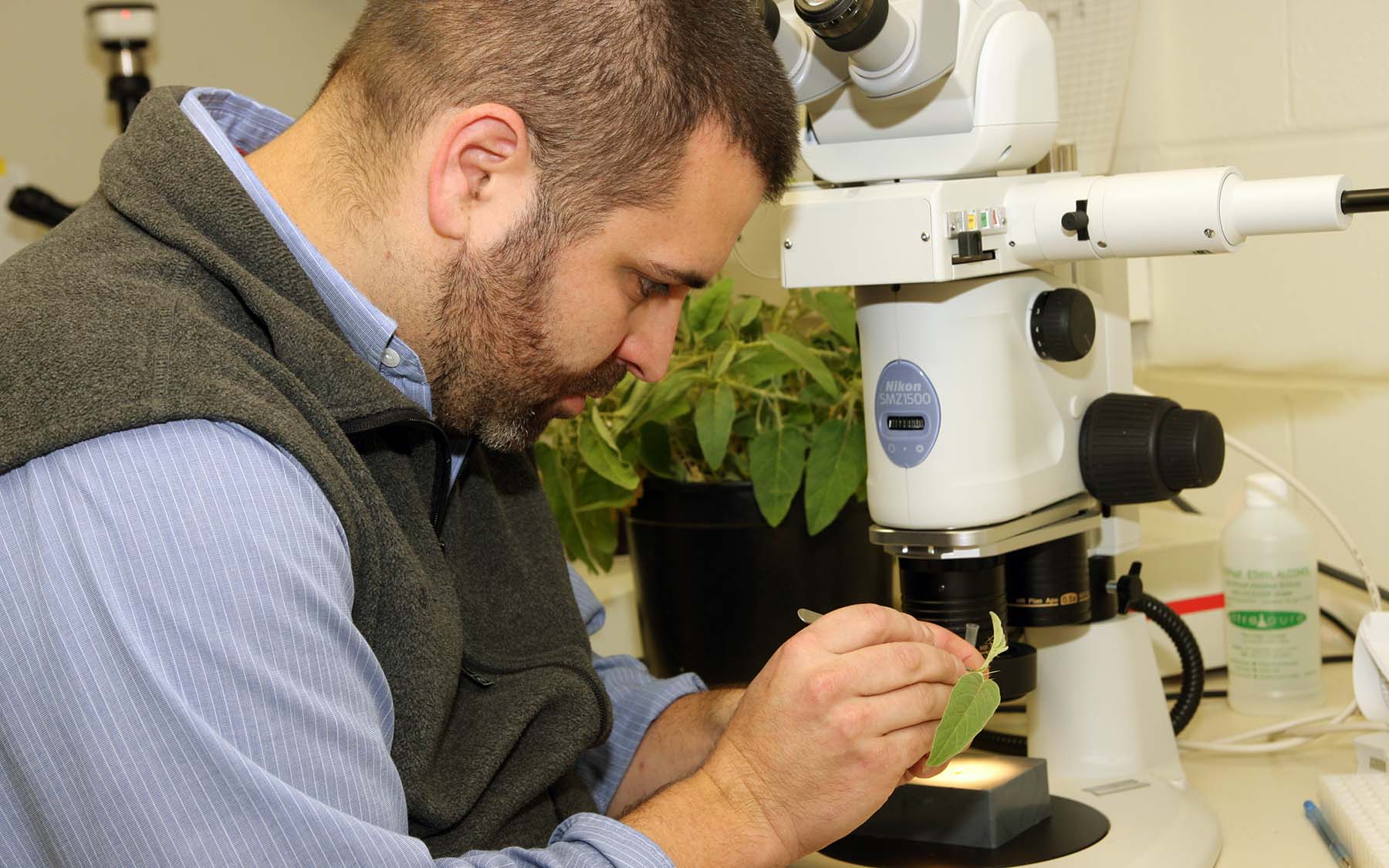 Cold Spring Harbor, NY — Flowers don’t just catch our eyes, they catch those of pollinators like bees as well. They have to, in order to reproduce. Because plants need to maximize the opportunity for pollinators to gain access to their seeds, variations in the timing of flowering can have profound effects on flower, fruit, and seed production, and consequently agricultural yields.

We know that the major driving forces of flowering are external factors such as light and temperature. However, new research from CSHL Assistant Professor Zach Lippman, Ph.D. and his collaborators, published online today in Nature Genetics, shows there is a second, previously unknown mechanism controlling flowering.

Using the tomato plant as their model, Lippman and CSHL co-authors, Cora MacAlister, Soon Ju Park and Ke Jiang, show that loss of control of the timing of flowering, such that the flowering program turns on too fast, results in production of only a single flower on each branch, rather than the usual 7 to 10. Conversely, slowing down the flowering program enables more flowering branches to grow, which means more fruit.

Such dissection of the timing mechanism of flowering in plants like tomato is leading to new strategies for increasing agricultural yield in important crops.

Timing of flowering is precise

During the flowering process, plants form reproductive shoot structures called inflorescences. These structures derive from small stem cell populations buried inside the tiny growing tips of plants called meristems. As plants sense and respond to signals from light and/or temperature, it is at the meristems where plant organs—leaves or flowers—are formed.

Domesticated tomato plants, which we know and love for their shiny, tasty red fruit, typically grow several multi-flowered inflorescences on each shoot. Each inflorescence is arranged in a zigzag pattern of 7 to 10 flowers on a single branch. Curiously, many wild species of tomato produce multiple branches on each inflorescence, with each branch having many flowers, thereby increasing the reproductive potential of the plant. In rare cases, genetic mutants of domesticated tomatoes form broom-like inflorescences with dozens of branches like the wild species. Interestingly, there is another class of mutants that produce just a solitary, sometimes abnormal looking, flower.

In previous research Lippman and others reasoned that the timing of flowering would be important in determining whether an inflorescence was highly branched or not. By characterizing the activity of thousands of genes involved in the flowering process of tomato, Lippman and members of his laboratory revealed a “molecular clock” coordinating whether meristems give rise to branched or unbranched inflorescences.

In their newly published research, they reveal that one of those genes plays a critical role in keeping the clock from ticking too fast.

“In order for a plant to determine when and where to switch from making leaves to making flowers everything has to be timed perfectly,” says Lippman. “We know that the flowering process is regulated by temperature and day length; these control one aspect of the timing. But now we’ve found a new timing mechanism.”

The moment of insight for Lippman and his team, including colleagues at the Unité de Recherche en Génomique Végétale in Evry, France and the Weizmann Institute of Science in Rehovot, Israel, came when studying mutant tomato plants. “We found a gene that when mutated converts the typical tomato multi-flowered inflorescence into one with a single flower,” Lippman says. Interestingly, this caused the tomato plant to mimic other single-flowered plants of the same family, called Solanaceae, which includes the eggplant, tobacco, petunia, and pepper plants.

The gene Lippman’s team found, called TERMINATING FLOWER (TMF), had not been previously known to have such a crucial role in plant growth. This was despite the fact the flowering process and the genes that control it have been studied in great depth over decades in many plant systems, including the model plant Arabidopsis as well rice and corn (maize).

“It seems TMF regulates a previously unknown pathway that is involved in the timing of flowering. The reason that mutations in TMF cause single-flower inflorescences is that the plant is tricked into thinking it is time to make a flower when it is still in the vegetative state—the phase of growth that precedes flowering when leaves are still being made,” explains Lippman.

Flowering is a tightly coordinated process, so when TMF function is lost the process becomes de-synchronized and uncoordinated. The external signals from light and temperature have not yet reached the critical threshold to tell the plant it is ready to make flowers, yet the program for making flowers starts anyway. Thus TMF acts as an internal check on the flowering transition. “Its normal function is to delay flowering, to gently slow it down, so that it doesn’t happen too precociously,” Lippman says.

If plants make flowers too quickly, there may not be enough energy from leaves to support those flowers and fruits. But Lippman suggests that some species of plants have taken advantage of this mechanism and evolved to make more or less flowers per inflorescence. It may be that in nature, some plants are more successful when making fewer flowers over a longer period of time, for example.

The Solanaceae species to which tomato belongs contains examples of all types of inflorescences, which is why Lippman finds the model is so fascinating to study. By learning about the genetic switches controlling flower production, the hope is that they can be manipulated in agricultural crops like tomato to improve yield.

The research described in this release was supported by the following grants and funding agencies: The tomato TILLING project is supported by European Union SOL Integrated Project FOOD-CT-2006-016214 to AB. CMA is a Gordon and Betty Moore Foundation Fellow of the Life Sciences Research Foundation. This research was supported by research grant 1294-10 from ISF and BARD IS-4249-09to YE, and a Career Development Award from The International Human Frontier Science Program Organization to ZBL.

“Synchronization of the flowering transition by the tomato TERMINATING FLOWER gene” is published online in Nature Genetics on November 11th, 2012.  The authors are: Cora A. MacAlister, Soon Ju Park, Ke Jiang, Fabien Marcel, Abdelhafid Bendahmane, Yimon Izkovich, Yuval Eshed, and Zachary B. Lippman. The paper can be obtained online at doi:10.1038/ng.2465 via Nature Genetics