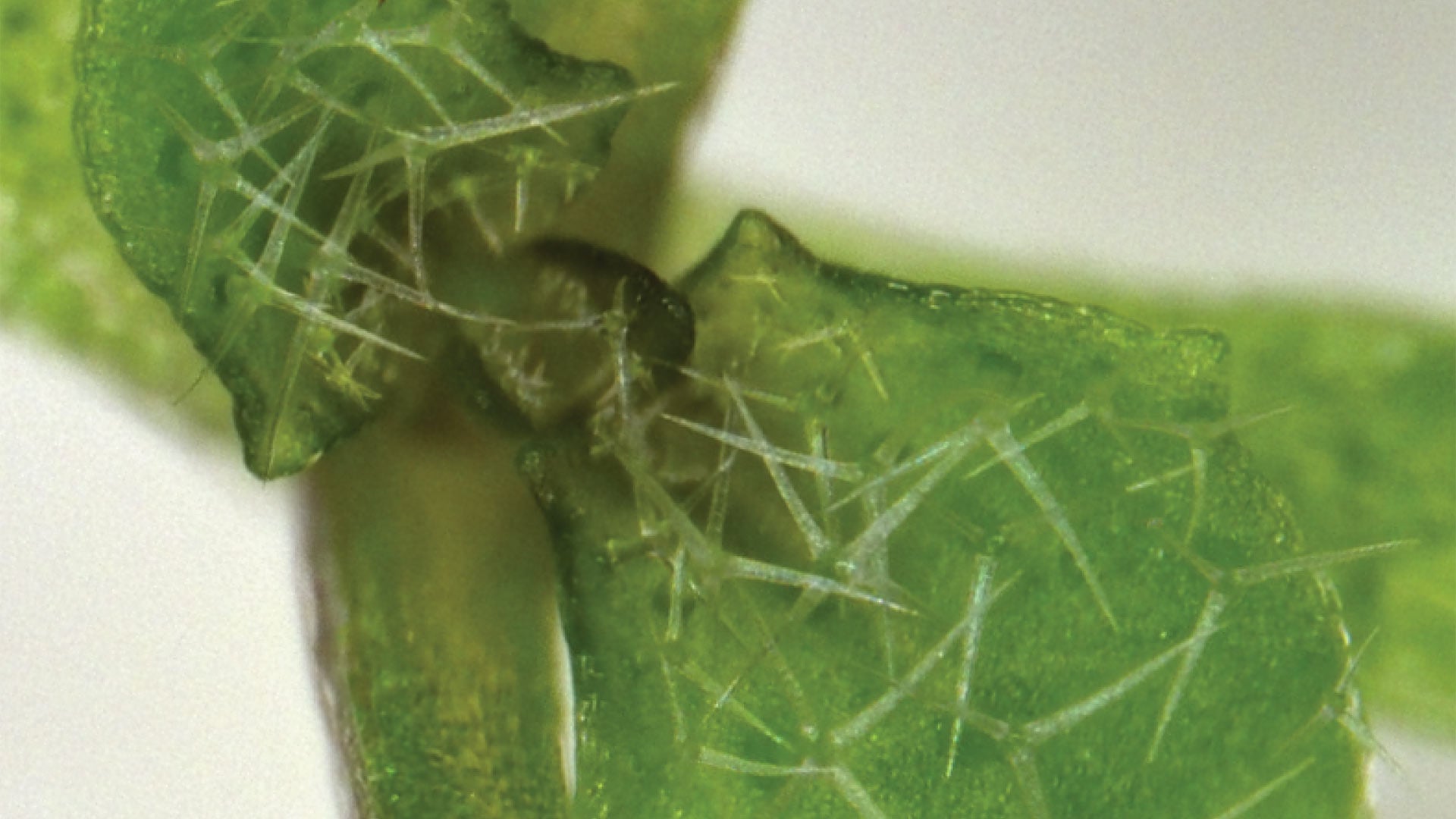 Plants need an internal communication system to coordinate their development and growth. Within a plant, cells message each other with pieces of RNA. CSHL Professor David Jackson discovered a protein that carries these RNA messages between cells. Tinkering with this communication system may help crops grow better and adapt faster to their environment.

How does a developing plant shoot know how, where, and when to grow? Dividing cells need to pass messages from one another to coordinate growth. In plants, important messages are packaged into RNA, which are sent from cell to cell. By studying the mustard-like plant Arabidopsis thaliana, Cold Spring Harbor Laboratory (CSHL) Professor David Jackson and his team found that RNA messages need a special protein to escort them where they need to go. Without this escort, cells cannot coordinate and the plant fails to develop properly.

Unlike animal cells, plant cells are surrounded by a rigid cell wall. Messages can cross this wall through tiny holes called plasmodesmata. Munenori Kitagawa, a postdoc in the Jackson lab who led this study, says, “Plasmodesmata are nanochannels embedded in the cell wall. They mediate various signals’ transport from cell to cell, including protein, RNA, hormones, ions, and nutrients.”

Plants use RNA as a way to relay messages from cell to cell. In this video of an Arabidopsis thaliana plant—a relative of mustard—RNA messages (stained orange) jump around inside a cell. When messages find tiny gated channels called plasmodesmata (stained blue) that allow them to pass, they move to another cell. Video by Kitagawa/Jackson lab

Kitagawa wondered how the plasmodesmata’s gates regulate messaging from one cell to the next. The team discovered that RNA signaling relied on a protein called AtRRP44a. Lowering the amount of AtRRP44a slowed the movement of RNA messages; lacking the right messages, the plants failed to develop properly. A protein similar to this escort protein is present in other plants, yeast, and animals. The researchers were able to swap out part of the Arabidopsis thaliana signaling system with parts from corn and restore normal development, showing that this signaling system is similar in many kinds of plants. Jackson says, “Plants are very sophisticated. We think of them just sitting in their environment, not moving, but really they’re processing a lot of information. The different parts of the plant are talking to each other, sharing whether they have some pathogen attack or if they need some nutrients.”

In a related study published recently in the journal Science, Jackson and collaborators at New York University found that signals transported through these gates can increase the number of cell layers in corn roots, making the plants potentially more resilient to environmental changes.

“This paper represents an important step towards understanding how information is exchanged between cells to control development and other processes,” said John McDowell, a program officer in the U.S. National Science Foundation’s Directorate for Biological Sciences. “By revealing a new component of cell-to-cell communication, this research opens the door for further investigation that could allow us to harness this process.”

Plants need an internal communication system to coordinate their development and growth. Within a plant, cells message each other with pieces of RNA. CSHL Professor David Jackson discovered a protein that carries these RNA messages between cells. Tinkering with this communication system may help crops grow better and adapt faster to their environment.

Lab life: A step for students, a leap for science