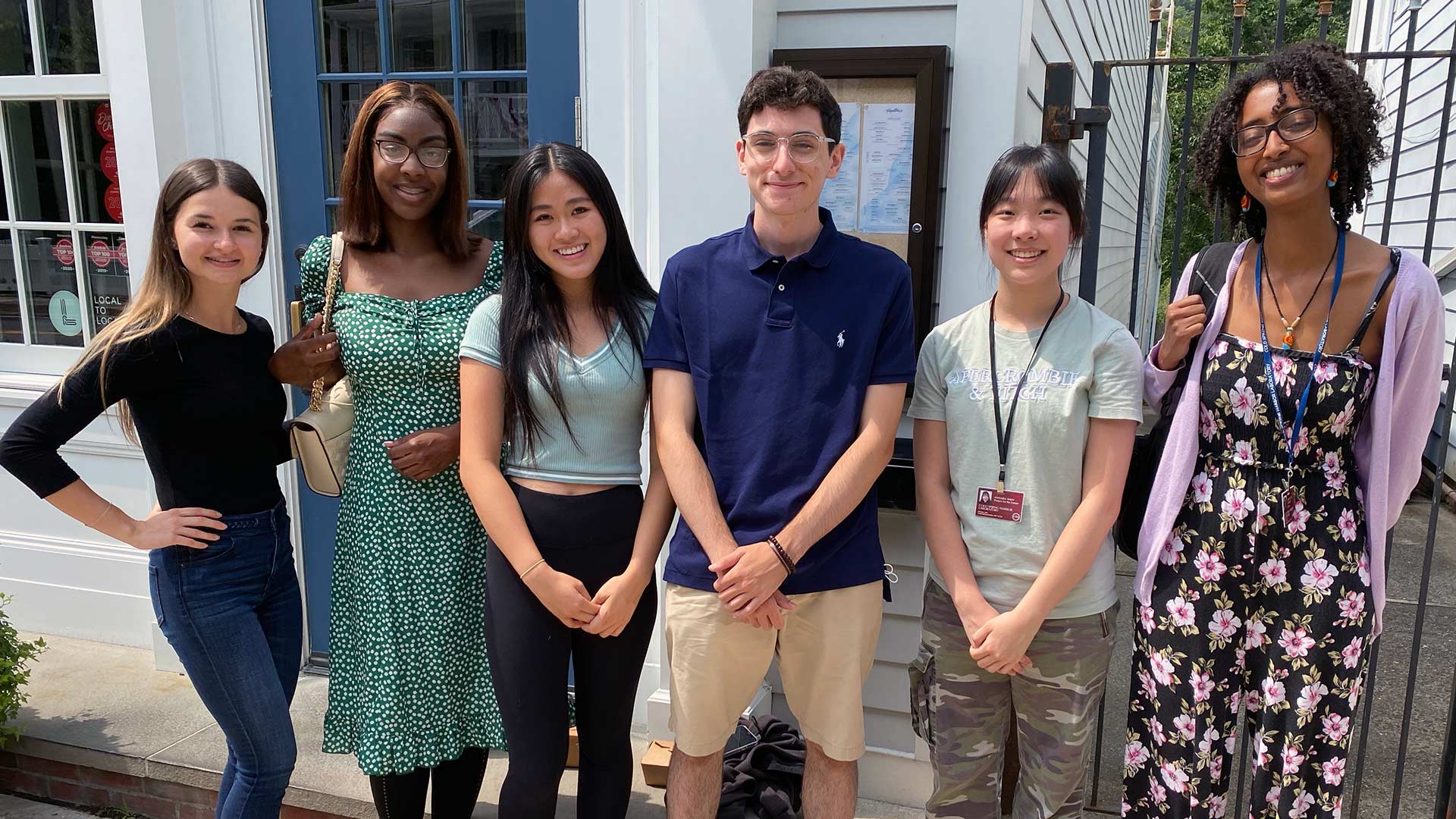 Cold Spring Harbor Laboratory (CSHL) draws in young scientists through the Partners for the Future (PFF) program and other programs. Many students have such a great time on campus that they come back to work at the Laboratory. Left to right: Taylor Petrizzo (summer undergrad researcher), Z’Dhanne Williams, (summer undergrad researcher, PFF 2020), Katie Lam (PFF 2021), Matthew Venezia (summer undergrad researcher, PFF 2019), Annabel Shen (PFF 2022), Sessen Daniel Iohannes (entering CSHL School of Biological Sciences 2021 graduate student who previously had been at CSHL for a scientific meeting). Image: Jackson lab
email envelop icontwitter icon share buttonfacebook icon share buttonlinkedin icon share button
When can aspiring scientists start their careers? High school students can find out first-hand whether bench or field research is for them through an internship program at Cold Spring Harbor Laboratory (CSHL) called the Partners for the Future (PFF) program. Since starting in 1990, the program has partnered over 200 high school seniors with CSHL researchers. The students work in cancer, neuroscience, genetics, plant biology, and quantitative biology labs. Besides getting a taste of the research life, students also get a chance to lead their own projects and hone valuable research skills.

CSHL Professor David Jackson, director of the PFF program, says that the program is open to all. For some students, like Matthew Venezia, the program provides a first step into his field of interest (“More science, please”). For others, like Katie Lam, it can help them chart a career path (“To science or not to science”). And for senior scientists at CSHL, it is an opportunity to grow the next generation of researchers (“It’s personal”).

CSHL Professor David Jackson and several students discuss the benefits of participating in the CSHL Partners for the Future program.

Matthew Venezia wanted something more than he was getting from his science classes. He wanted to do hands-on lab work and pursue more creative problems. So he applied and was selected for the 2019 PFF program. Looking back on his time at CSHL he said, “Over those eight months at the end of high school, I probably learned more about the scientific process than I had in all the years up to that point.”

Venezia studied corn in the Jackson lab, using what he described as “a bunch of plant genetics tricks.” He used a genome-editing technique called CRISPR. His job was to evaluate how efficient a particular CRISPR technique would be in corn. Venezia recalled that sometimes his results were unexpected: some corn exhibited surprising traits that he did not anticipate. He says:

“It’s never really a straight line, from question to answer, when you’re doing research. The next biggest thing that I learned was: it takes a really long time to do research.”

Venezia is currently majoring in biology and working in a plant biology lab at Stony Brook University (SBU). He plans to apply to Ph.D. programs after college; he may even return to CSHL as a graduate student in the School of Biological Sciences.

Venezia was committed to scientific research early in his studies. But for many students, it is not that simple.

To science or not to science

Katie Lam, a high school junior in the spring of 2020, was not sure whether she wanted to go into science. But because of the COVID-19 pandemic it was difficult to get any hands-on lab experience and figure it out.

Fortunately, Penelope Lindsay, a postdoc in Jackson’s lab, had a data analysis project that could be done at home as part of the 2020 PFF program. That year, Lam learned and used computer programming languages like “R” to understand genetic variation in corn. She studied the DNA sequences of several strains with different ear sizes, finding sequences that correlated with increased size. Toward the end of the program in the summer of 2021, Lam was able to do fieldwork at the Laboratory. She examined whether the sequences behaved in real corn the way her data predicted.

After finishing the program, Lam began to study neuroscience at Duke University. She stays in touch with Lindsay, who says:

“It was funny because Katie started college and she sent me a text and was like ‘Oh! I just used R today for my class!’ So it’s great even to see this very specific skill being translatable to what she was doing in college.”

Lam appreciates that and other skills she gained at the Laboratory: “I was able to hone my leadership and teamwork skills as I collaborated with others. I’ve developed skills that I will put to use throughout my life.”

To Jackson, what is most important is that the students leave with a sense of connection to the scientific community. He says:

“The ‘P’ in PFF is ‘Partners’ and it’s to give these students a personal contact at Cold Spring Harbor (Laboratory) and in science, someone who can give them ongoing advice.”

Jackson encourages all high school juniors to apply, saying: “There are plenty of students interested in science, but they may not have had enough exposure to science to feel confident that they could apply successfully to a program like PFF.” Jackson hopes that once they complete the program, “students know what it’s like to work in a lab; we give them a head start in a lab environment.”

Applications for PFF open in February and selection takes place in April. Students must be nominated by their high school science chairperson. PFF students will be expected to work on campus several days a week during the following school year, conducting original research under the guidance of CSHL scientists. At the end of the program, students present their projects to scientists, teachers, friends, and family. Check out this link for more information and access to the application.

Cold Spring Harbor Laboratory (CSHL) Professor David Jackson is a leader in both agriculture science and STEM education at CSHL. Since Jackson took over the PFF program eight years ago, he has nearly tripled the size of cohorts, from five to around 15. Jackson hopes to increase the number of students, especially from underrepresented and underprivileged communities.

Climate change and population growth are threatening our crops. CSHL Professor David Jackson is helping corn keep up with the demand.   Read more »