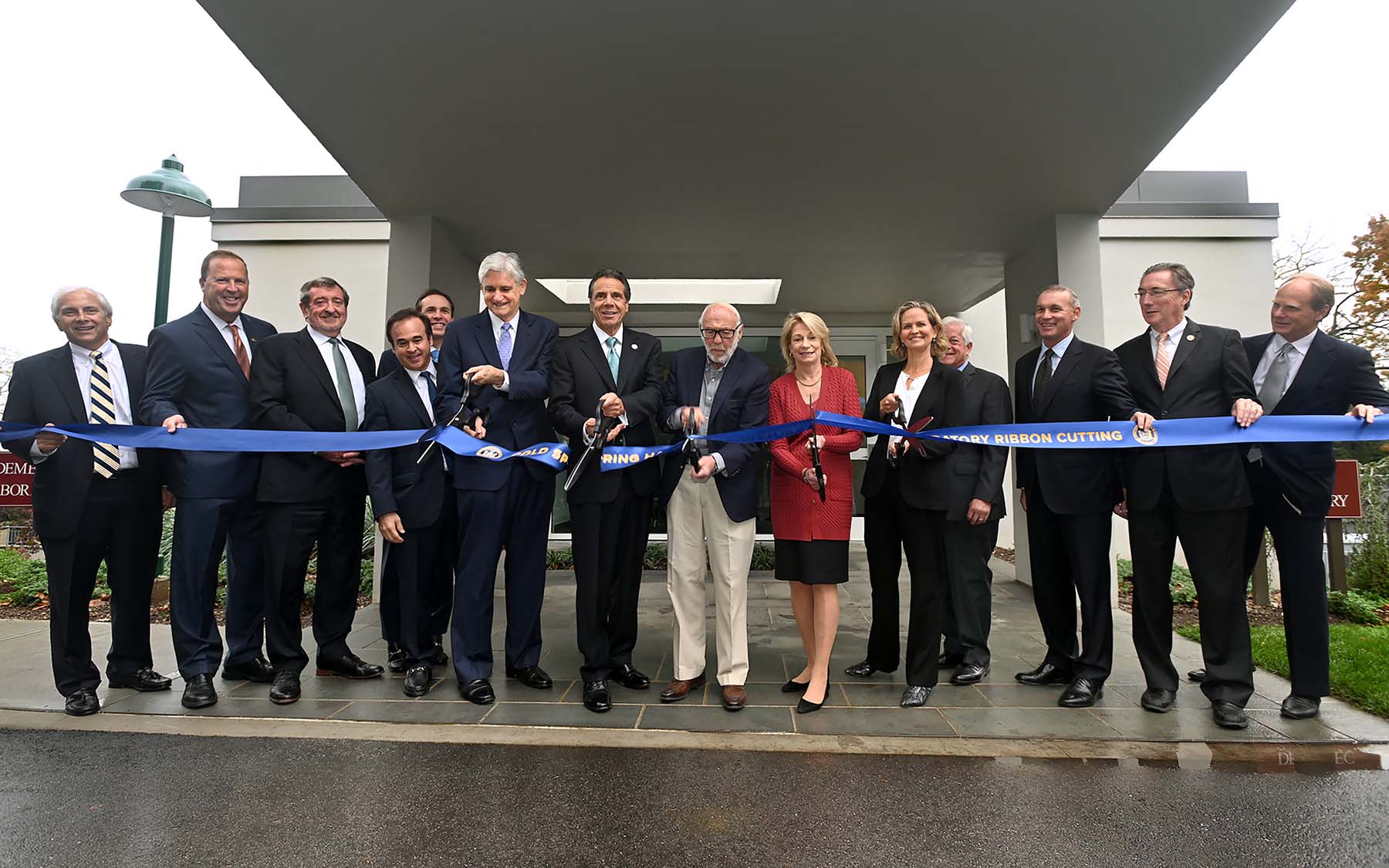 New York's Governor Andrew M. Cuomo celebrated the rebirth of our historic Demerec lab space with a ribbon-cutting. Opening the renovated facility marks the beginning of a new era for CSHL research.

After two years of extensive renovation and with generous support from New York State, Cold Spring Harbor Laboratory’s historic Demerec laboratory is reborn as a state-of-the-art research facility. Governor Andrew M. Cuomo cut the ribbon for the building’s reopening Wednesday, celebrating how the state will benefit from this new chapter in CSHL research.

“It’s good for the economy, but also [this is research] that I believe will improve the quality of life for thousands and thousands of people. I believe this work will save lives,” Governor Cuomo said during his visit. “That is the work that the people in this facility are dedicated to. And the state is honored to be playing a small role today.”

The Demerec laboratory, home to four Nobel laureates, has been both a bastion and compass point for genetics research in New York and the world. Its new research will focus, among other things, on taking a more holistic approach to treating cancer and the disease’s impact on the entire body.

Want to learn more about the Demerec buildings influential history? Check out our comprehensive feature.

To prepare the Demerec building for 21st-century science, it had to be gutted, with extensive renovations of the basement and interior, while leaving the historic 1950s brutalist exterior largely unchanged.

“We really challenged ourselves to preserve the history of the building as much as possible,” said Centerbrook design firm architect Todd E. Andrews, who planned the renovation.

The result is a modern facility uniquely designed for a scientific approach that considers disease not as a stand-alone subject of study but as a complex system that focuses on the patient.

“Too often [scientists] are not looking at the patient and the system of the patient… even though there are obvious signs that we should be looking,” said Tobias Janowitz, M.D., Ph.D., one of the next generation of Demerec lab scientists and research-clinicians dedicated to rethinking cancer medicine.

Other Demerec researchers will include Nicholas Tonks, Ph.D., who investigates relationships between diabetes, obesity, and cancer, and Linda Van Aelst, Ph.D., a neuroscientist who is interested in how sleep and signals from the brain may be impacted by cancer. Semir Beyaz, Ph.D., who studies how a patient’s nutrition can affect cancer treatment, will also join the team.

While the Demerec building’s faculty hasn’t been finalized, the researchers will be working alongside the rest of the CSHL community—including 600 scientists, students, and technicians—to create a distinctly collaborative and cross-disciplinary culture.

Governor Cuomo called the Demerec building and the larger CSHL campus “hallowed ground for scientific research,” after dedicating $25 million in 2017 towards the $75 million renovation. He’s confident the space and its scientists will deliver a new wave of scientific progress.

Renovating a single research facility may seem like a small step towards the state’s goal, but this particular building has made Long Island a scientific hotspot once before.

“While the Demerec building is comparatively smaller than larger projects that the governor has initiated… it is arguably one the most productive buildings in all of science,” said CSHL President and CEO Bruce Stillman. “This renovation allows us to really think about where the Lab will take things next. It will have, I hope, a global impact on the research community, especially in the biomedical sciences.”

New York's Governor Andrew M. Cuomo celebrated the rebirth of our historic Demerec lab space with a ribbon-cutting. Opening the renovated facility marks the beginning of a new era for CSHL research.