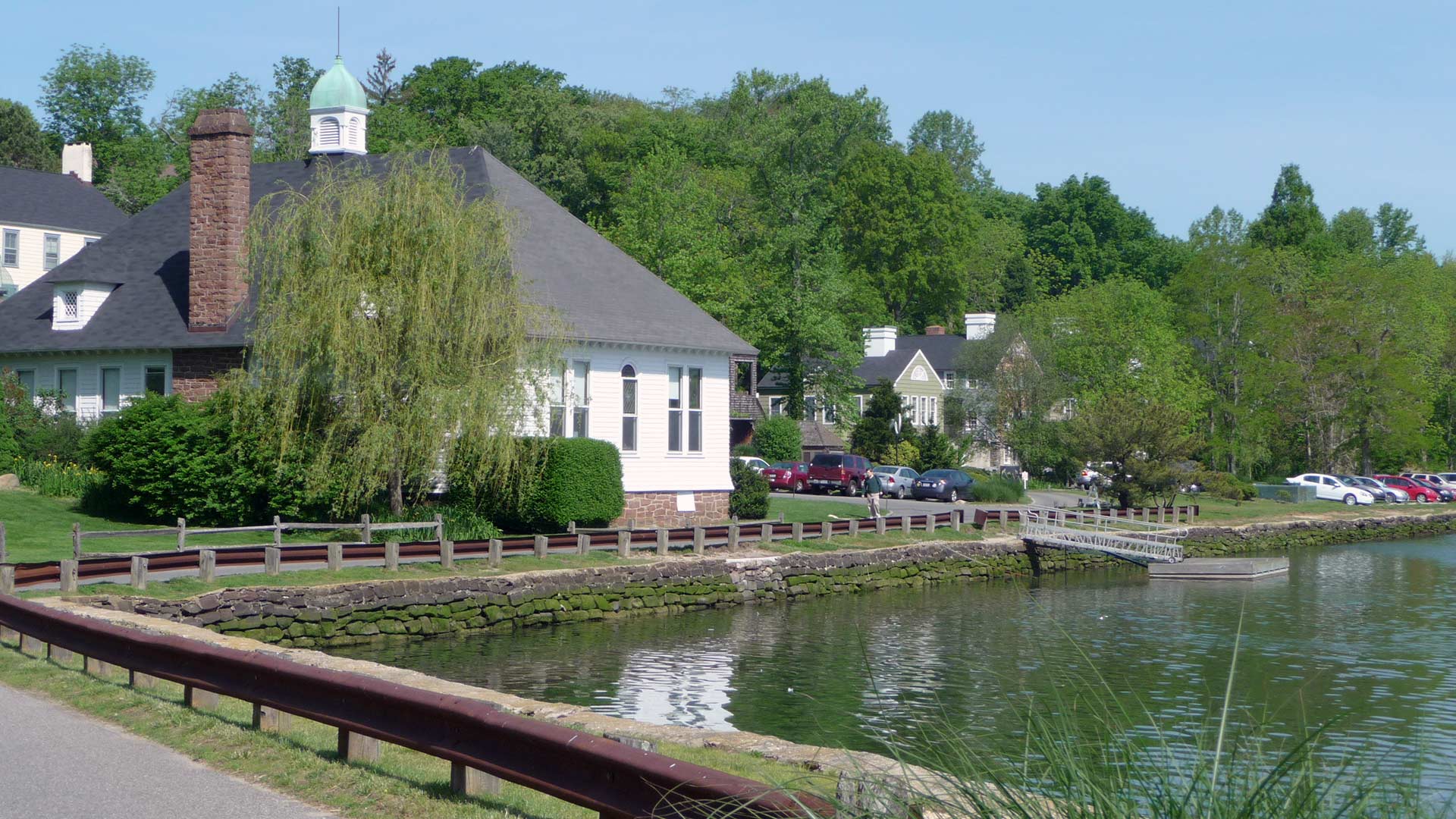 The Cold Spring Harbor seawall was constructed in 1850 by brothers John, Walter, and Townsend Jones to protect the local land from flooding. Since then, time and powerful storms, including Hurricane Sandy of 2012, have weakened the structure. Cold Spring Harbor Laboratory (CSHL) started work in June 2021 to restore and strengthen the historic seawall. It will be refaced with the original stones to preserve its appearance. CSHL is working with all local and state authorities to ensure that both the history and the local environment of the inner harbor are preserved.

Brothers John and Walter Jones founded the Cold Spring Harbor Whaling Company in 1836. The company was a major driving force in the local economy, financing 44 voyages on nine ships that came in and out of the local harbor during its operation. The rise and the fall of the daily tides, along with occasional flooding from storms, would come up on the shores of the town. John and Walter, along with their third brother Townsend Jones, recognized the need to protect the local land from the ocean waters. In 1850, they constructed a seawall on the shores of the land owned by their father, John Jones. They transported stones from a Connecticut quarry on three schooners and built the wall to block seawater from flooding what are now the grounds of Cold Spring Harbor Laboratory (CSHL).

Since then, powerful storms, especially Hurricane Sandy of 2012, have weakened the protective seawall. With sea levels rising due to climate change, the historic wall is no longer tall or long enough to withstand stronger and higher storm tides. To combat this, CSHL will dismantle 925 feet of the original stone seawall, install pile-supported concrete, and increase the height and length of the new wall to be more resilient to anticipated future storms and floods. The wall will be refaced with original seawall stones to preserve its historical appearance.

CSHL has been developing the restoration plans with GEI Consultants Inc., P.C. since 2019. Skanska, a Swedish-based construction and engineering group, is overseeing the project, while Triumph Construction is doing the building work. The Laboratory is working with all state and local authorities, including the New York State (NYS) Department of Parks and Recreation, NYS Department of Environmental Conservation, NYS Historic Preservation Office, the U.S. Army Corp. of Engineers, and the Village of Laurel Hollow. The construction work started in June 2021 and is anticipated to finish by summer 2022.

One of the project’s major considerations is its environmental impact. The harbor is home to a species of fish known as winter flounder, which lay millions of eggs in the water during the spawning season. GEI Consultants investigated whether the construction would affect the fish and their breeding patterns. When the tides are low, the shoreline of the inner harbor becomes too dry for flounder eggs to survive, so the fish lay their eggs in deeper water, away from the seawall. Therefore, the construction is not anticipated to affect the flounder population. Recognizing the minimal environmental impact, the New York State Department of Environmental Conservation granted the Laboratory a permit for construction.

Rebuilding and extending the seawall represents CSHL’s commitments to historical preservation, environmental protection, and the Laboratory’s future. In a nod to local history, the new Laboratory (founded in 1890 as The Biological Laboratory) named its first building after the three Jones brothers in 1895. Careful stewardship of the Laboratory’s namesake harbor is key to its future, ensuring that Jones Laboratory and other historical buildings close to shore remain safe for the next 170 years.

The Cold Spring Harbor seawall was constructed in 1850 by brothers John, Walter, and Townsend Jones to protect the local land from flooding. Since then, time and powerful storms, including Hurricane Sandy of 2012, have weakened the structure. Cold Spring Harbor Laboratory (CSHL) started work in June 2021 to restore and strengthen the historic seawall. It will be refaced with the original stones to preserve its appearance. CSHL is working with all local and state authorities to ensure that both the history and the local environment of the inner harbor are preserved.

How a lab and its model animals changed science

The natural history of science at Cold Spring Harbor Laboratory through the lens of animal research.   Read more »

The Demerec building has been monumental in scientific history. Now, a $75 million renovation of this celebrated labspace will define CSHL’s future.   Read more »