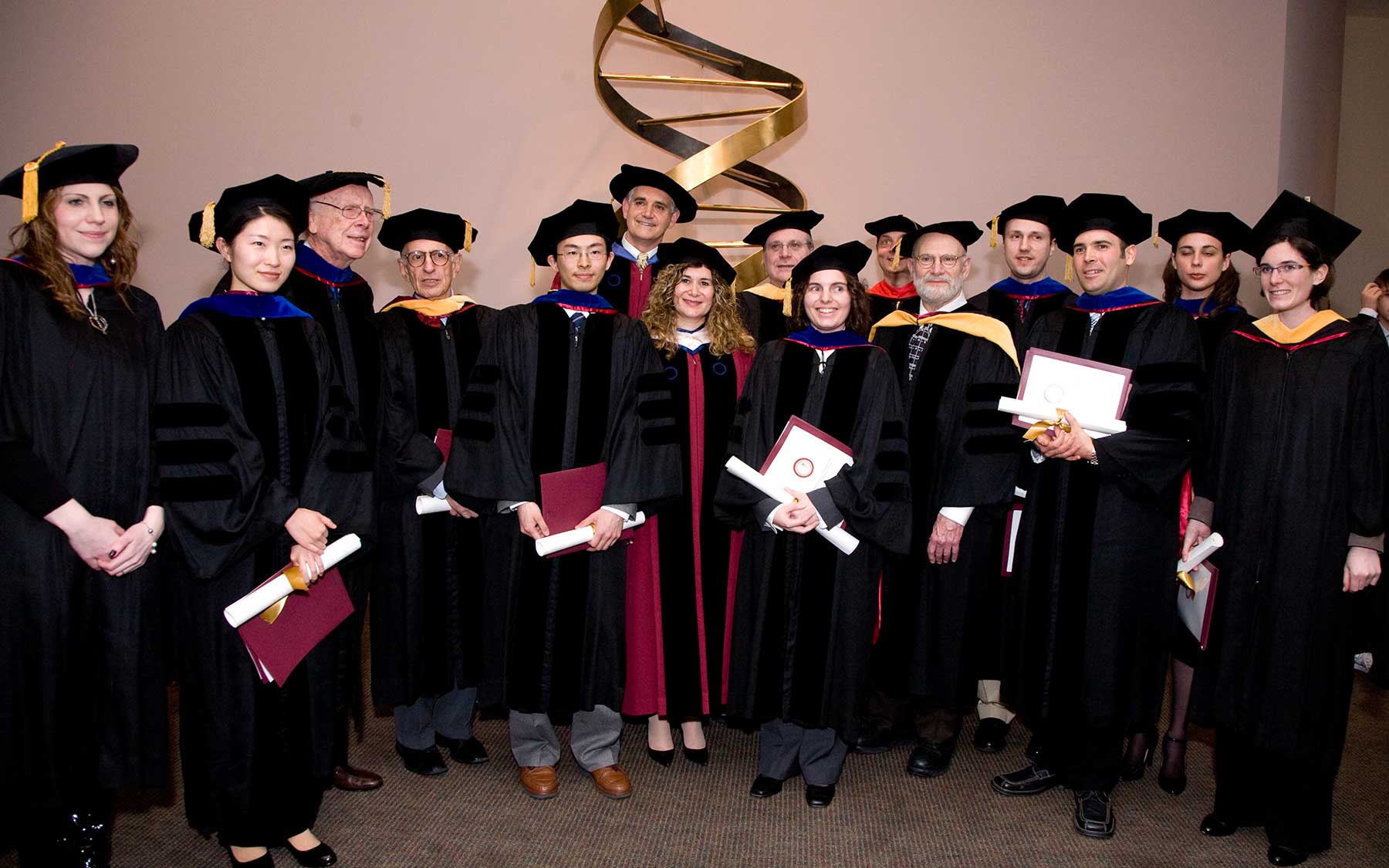 Cold Spring Harbor, NY — Friends and family from as far way as China, Japan, France and Italy recently gathered at Cold Spring Harbor Laboratory (CSHL) for the fifth commencement ceremony of the Watson School of Biological Sciences (Watson School). Beaming smiles, hugs, handshakes and kind words were flowing freely through the crowd of well-wishers in attendance.

“We have established a remarkable program here at the [Watson School], but our ultimate test, of course, is the success of our graduates,” said Dr. Joshua-Tor. “I am proud to say we are living up to our promise. Our students are publishing in elite journals, have received prestigious awards, and three have secured faculty positions as assistant professors in other institutions.”

Dr. Sacks, in 1966, worked in a chronic-care facility where he encountered a group of patients, many of whom had spent decades in strange, frozen states, unable to initiate movement. He recognized these patients as survivors of sleeping sickness and treated them with a then-experimental drug, L-dopa, which enabled them to “come back to life.” They became the subjects of his book, Awakenings, which later inspired the Oscar-winning feature film. Dr. Sacks delivered the commencement address to this year’s graduating class. His address challenged them to “be prepared for an adventure” and to “leave CSHL dedicated not only to science but to wonder in the broader sense.” Dr. Sacks added, “You have marvelous discoveries ahead of you, and I hope that your lives will not only be fruitful but colorful, adventurous and fun.”

Dr. Kandel received his Nobel Prize in 2000 for Physiology or Medicine and is university professor at Columbia, the Fred Kavli professor and director at the Kavli Institute for Brain Science, as well as a senior investigator at the Howard Hughes Medical Institute. His research has focused on the molecular mechanisms of memory storage. Dr. Kandel described the graduates as extremely privileged. “[The Watson School] differs from every other university in the world in being an international university. It is hard to think of a biological scientist who has not visited here and has not benefited.”

Paul G. Allen, philanthropist and Microsoft co-founder, is the founder and chairman of Vulcan Inc. and chairman of Charter Communications. With a lifetime of giving totaling nearly $1 billion, Allen has been consistently named one of the top philanthropists in America. One such philanthropic endeavor includes his commitment of $100 million in seed money dedicated to brain research, resulting in the creation of the Allen Institute for Brain Science. Mr. Allen conveyed to the graduating class that “real scientific progress and innovation come from teamwork, critical thinking, creative problem solving and most important, the open sharing of ideas.” He added, “Each of you now has the opportunity, and dare I say, the obligation to help change the world to be a better place.”

In conclusion, Bruce Stillman, president, Cold Spring Harbor Laboratory, shared his own thoughts with the graduating class, “Though relatively small in number, our faculty are giants when it comes to scientific research and scientific education. They teach our students how to think and learn like scientists. They themselves remain students of science—students of the unknown. We expect each of you to continue that tradition by remaining students of science and students of life.”

Cold Spring Harbor Laboratory’s Watson School of Biological Sciences received accreditation in 1998 and is widely known for its innovative approach to graduate education, in particular giving students the opportunity to earn a doctoral degree in approximately four years.