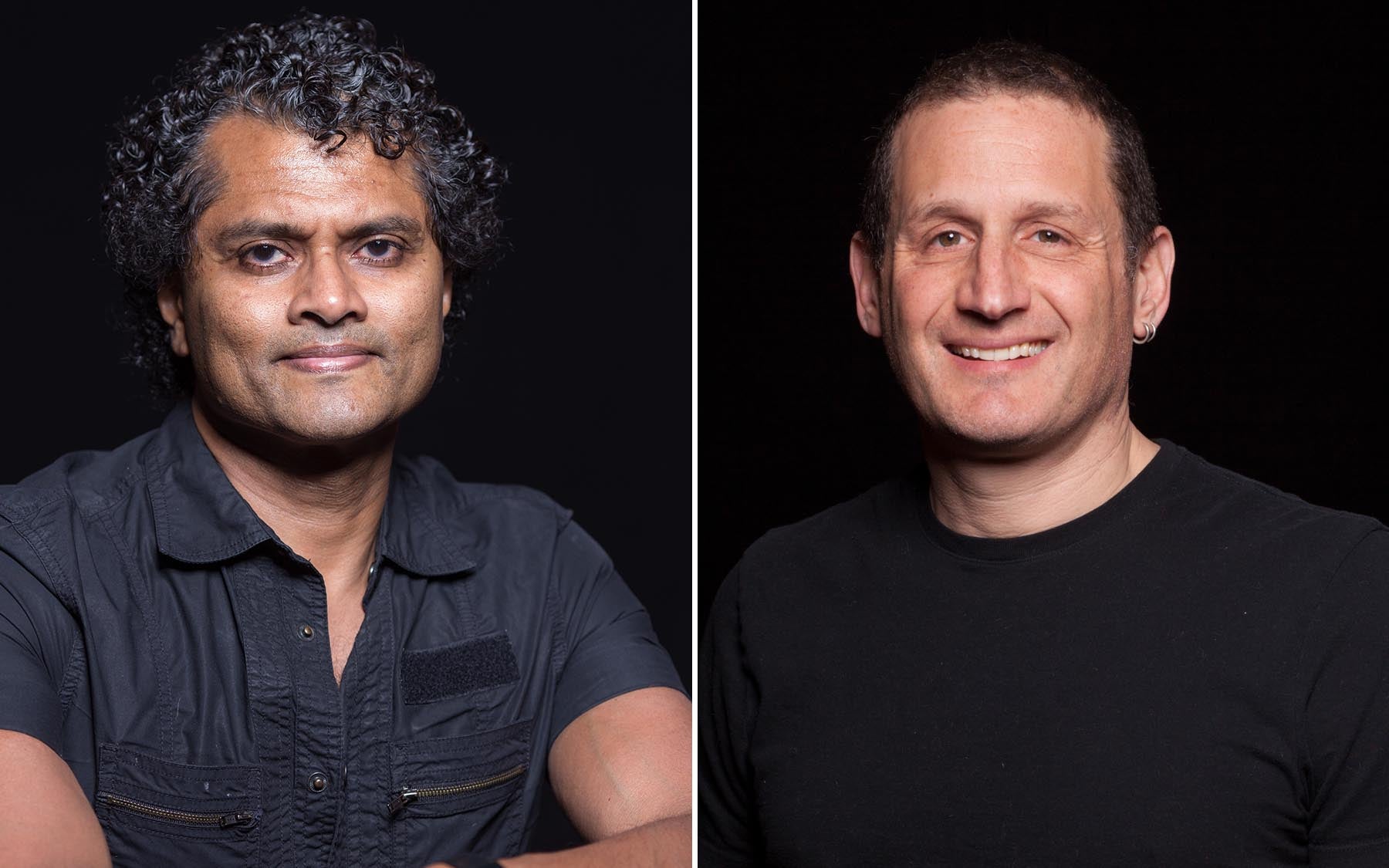 Cold Spring Harbor, NY — Two neuroscientists at Cold Spring Harbor Laboratory (CSHL) are among an elite group of only 42 researchers nationwide named by the director of the National Institutes of Health (NIH) to receive special five-year grants for “transformative” research projects.

Professor Partha Mitra, Ph.D., and Assistant Professor Josh Dubnau, Ph.D., were informed of their selection—announced by the NIH today—in letters addressed to them by Francis S. Collins, M.D., Ph.D., the new leader of the nation’s medical research agency, which is composed of 27 institutes and centers.

“This is wonderful news for Partha and Josh, whose work deserves to be recognized for its freshness and potential to change our way of understanding how the brain works,” commented Bruce Stillman, Ph.D., CSHL’s president. “It’s also a reflection of the continuing role played by Cold Spring Harbor Laboratory in bringing together scientists of the highest caliber who are given the freedom in a nurturing environment to tackle biology’s most important problems.”

This is the first year the NIH has offered the type of grant awarded to Mitra and Dubnau, called “transformative R01” grants, or T-R01s in NIH shorthand. They were devised by NIH with the bold purpose of encouraging “exceptionally innovative, high-risk, original and/or unconventional research that has the potential to create new or challenge existing scientific paradigms,” according to the NIH office administering the grants.

Mitra’s T-R01 project addresses a problem that he calls “fundamental.”  Even after decades of applying our most sophisticated technologies to study of the mammalian brain, “we still know comparatively little about how it is connected,” he observes. Mitra and colleagues, including Professor Harvey Karten of the University of California, San Diego, will use their “transformative” grant to produce the first brain-wide circuit diagram for the mouse, and using this as reference, attempt to determine alterations in the corresponding circuits of mouse models of neuropsychiatric disorders.

A key question about making any map concerns its scale, which determines its level of detail. At the finest scale of individual synapses and processes of every neuron, the brain shows a great deal of variability from individual to individual. At the macroscopic level, gross brain compartments such as the cerebellum or lobes of the cerebral cortex are too large to be nodes on a brainwide circuit map because they contain many sub-compartments. However, there exists a nontrivial “mesoscopic” scale, intermediate between these two levels that has been studied classically by neuroanatomists and is suitable for a meaningful circuit map.

“At the mesoscopic scale, neuroanatomists have found that there are well-defined regions—hundreds of them—and the circuitry we will be mapping is that between these regions,” says Mitra. “This mesoscopic circuit is probably encoded within the species genome and is grown during brain development. Parts of this mesoscopic circuitry may be altered from its normal state in neuropsychiatric disorders.”

While the current lack of a circuit diagram at the whole-brain level is “arguably the biggest knowledge gap in contemporary neuroscience,” according to Mitra, this first phase of the project is but the prelude to another no less fundamental in importance. “The second phase will be to compare a number of model mice bearing genetic mutations, to see how connectivity in their brains compares with that of the ‘reference’ map,” explained Mitra. “There is a parallel here with the Human Genome Project. The determination of a reference genome-enabled genome-wide scans of mutations corresponding to disease phenotypes. In this case, we want to see how the brain-wide connectivity map is altered in the mice with mutations associated with neurological and neuropsychiatric disorders.”

The current proposal arose out of planning work in the Brain Architecture Project, undertaken by Mitra with initial funding from the W. M. Keck Foundation and involving important collaborations and contributions from Professor Larry Swanson of the University of Southern California and Jason Bohland, Ph.D., of CSHL, among others. Some of the early discussions took place at meetings Mitra organized over the last several years at CSHL’s Banbury Center.

“We hope that the current project will be the seed for a larger community-wide effort for brain-wide circuit mapping across species, enabling comparative studies,” said Mitra. “It is greatly encouraging that the NIH, in awarding this generous grant, has taken a leadership role in this area.”

Every neuron in the brain forms a complex web of fibers that make connections with countless other neurons. The brain must somehow maintain and control each of these connections by precisely regulating the synthesis or delivery of many different proteins to each of the neural connection points, called synapses. Geneticists already know a great deal about how cells control the quantity of each RNA synthesized (“transcribed”) in the nucleus. But these RNA molecules each carry instructions beyond the nucleus, to direct the synthesis of a particular protein. Much less is known about how the translation of each RNA into a given protein is precisely controlled at each neuronal synapse.

Josh Dubnau’s “transformative” project addresses an important gap in knowledge: about how this fundamental step in the conversion of genetic information—its “translation” from RNA to protein—is regulated in neurons, the ubiquitous cells of the brain whose dense web of connections underlie its capacity to perform sophisticated functions such as forming and storing memories.

“Every neuron in the brain is a single cell,” Dubnau explains, “but they’re more complex, structurally, than most cells. You can think of the cell body in neurons as the base of a vast tree-like structure, a tree with literally thousands of branches. These projections—axons and dendrites—carry information, respectively, out of and into each neuron from other neurons.

“If neurons are to function properly, they need to control with exquisite precision where each protein in their structure is synthesized. When that process is disrupted in the human brain, severe cognitive problems can ensue. Fragile-X mental retardation is an example. Remarkably, we geneticists know a lot about how gene expression is regulated in the nucleus, where DNA is transcribed to RNA. But we know surprisingly little about the spatial regulation of protein synthesis. From the perspective of the cell-body, you have to specify on which ‘leaf’ of the neuronal tree a protein is being made.”

Dubnau notes that the project is significant from the standpoint of basic science; the regulatory mechanism he describes is still unknown. It also promises to shed new light on brain illnesses—Fragile-X is only one of several—“in which it has become clear that spatial and temporal control” of the process by which RNAs are translated into brain proteins in some manner goes awry.

“We’ll focus at first on Fragile-X as a kind of test case for our approach,” Dubnau says. “At the same time, we hope to provide the neuroscience community a library of fruit fly strains that will enable researchers around the world to query the regulation of genes in the nervous system, one by one. If many researchers take this approach, we can envision a collaborative process, akin to what computer scientists call parallel processing, that might open new windows on regulatory anomalies implicated in mental illness.”

The NIH Common Fund, from which the T-R01 grants are drawn, encourages collaboration and supports a series of exceptionally high impact, trans-NIH programs known collectively as the NIH Roadmap for Medical Research. The NIH Director’s Transformative R01, Pioneer, and New Innovator Award programs are part of the NIH Roadmap. The Roadmap is a series of initiatives designed to pursue major opportunities and gaps in biomedical research that no single NIH institute could tackle alone, but that the agency as a whole can address to make the biggest impact possible on the progress of medical research. Additional information about the NIH Roadmap can be found at https://www.niehs.nih.gov/funding/grants/announcements/roadmap/index.cfm.

The National Institutes of Health (NIH)—The Nation’s Medical Research Agency—includes 27 Institutes and Centers and is a component of the U.S. Department of Health and Human Services. It is the primary federal agency for conducting and supporting basic, clinical and translational medical research, and it investigates the causes, treatments, and cures for both common and rare diseases. For more information about NIH and its programs, visit www.nih.gov.