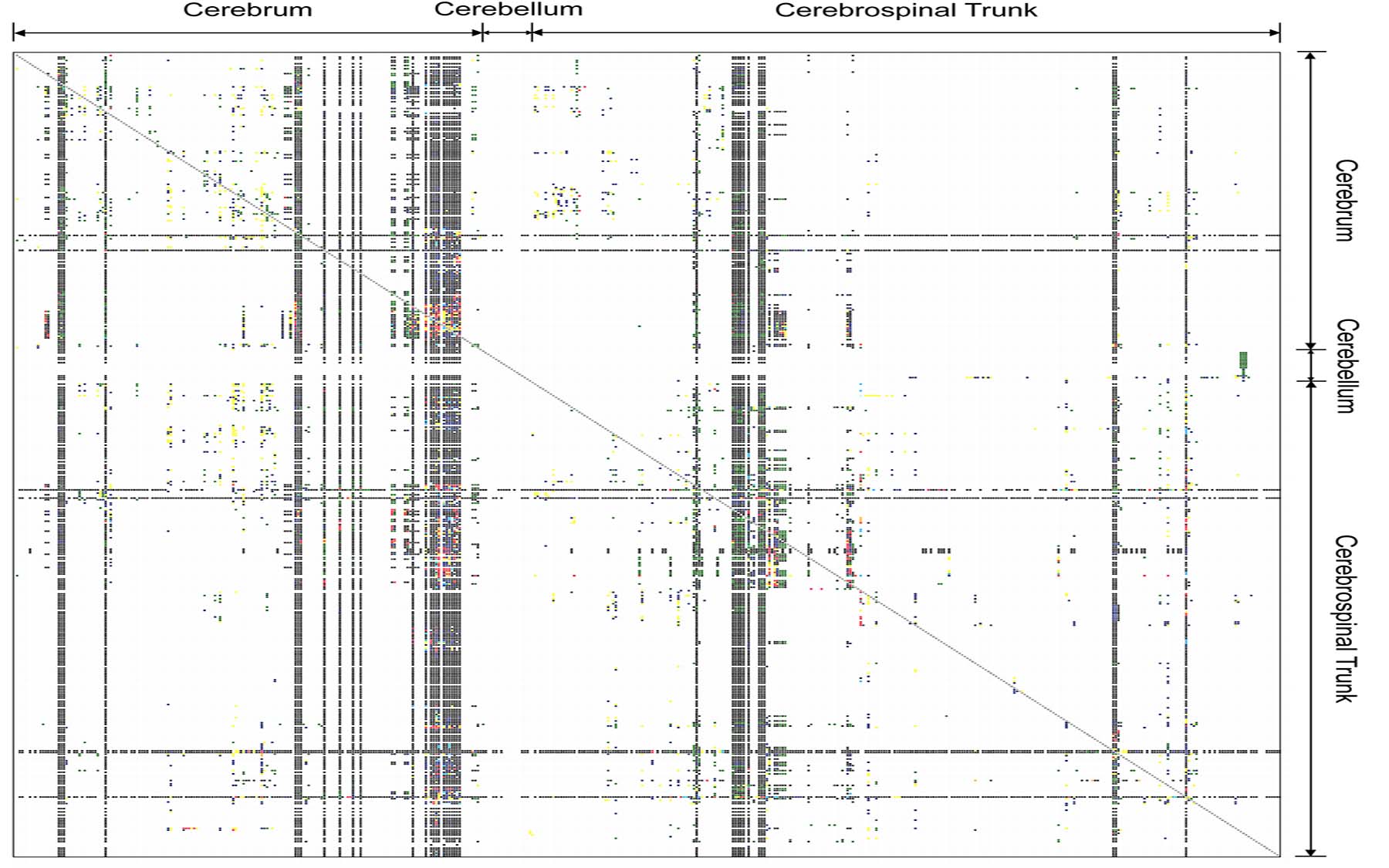 A whole-brain circuit map would likely provide powerful insights about what goes wrong in autism, schizophrenia, and other brain disorders

Cold Spring Harbor, NY — Thirty-seven scientists from Cold Spring Harbor Laboratory (CSHL) and 20 other major research institutions in the U.S. and Europe have issued a major challenge to the neuroscience community. At long last, the time has come, they argue in a just-published paper, to assemble a comprehensive map of the major neural circuits in the mammalian brain.

In an age in which the genomes of many organisms, including that of humans, have been fully sequenced and can be accessed instantly by anyone with a computer, anywhere in the world, it is astonishing to consider that “we have, as yet, not been able to compile a whole-brain map of the circuitry that underlies the functioning of our own brains,” notes Professor Partha P. Mitra, Ph.D., senior author of the paper and leader of the ongoing Brain Architecture Project at CSHL, funded by the WM Keck Foundation. To help address this knowledge gap, Mitra organized a series of meetings at the CSHL Banbury Center in 2007 and 2008, from which this proposal grew.

The neuroscience community’s “sparse knowledge” of mammalian neuroanatomical circuitry is “perhaps the largest lacuna in our knowledge about nervous system structure,” Mitra and colleagues observe in their paper, which appears in the March issue of PLoS Computational Biology.

The case for committing resources to assembly of a whole-brain circuit map is particularly strong, they say, because it almost certainly will provide insights about what goes wrong in brain dysfunctions spanning a range of neurodevelopmental illnesses including autism, schizophrenia, and perhaps mood disorders such as depression, bipolar illness, and obsessive-compulsive disorder (OCD). Further, the authors argue that technological advances along with decreasing computational and data-storage costs have made such an effort feasible now, when it could only be dreamt of even in the recent past.

A community-wide project to prepare a ‘first draft’

Mitra and his co-authors, therefore, advocate for “a concerted effort” to complete a first-draft circuit map of the entire mouse brain within two to three years, as a first step to mapping vertebrate brain architecture across species. The proposed project would ideally be pursued simultaneously by neuroscientists at multiple institutions according to standardized protocols. “In this respect,” says Jason Bohland, Ph.D., a postdoctoral neuroscience researcher at CSHL and the paper’s lead author, “it would be analogous to the multi-institution effort to sequence the human genome, with the important distinction that our brain-circuit map could be completed much more rapidly and would cost a small fraction of the genome project—as little as a few million dollars ranging up to perhaps $20 million, depending on the redundancy in coverage that we commit to.”

To date, research on the brains of mammals—typically, rodents and non-human primates—has described, using a multitude of different techniques, only a small fraction of the total set of neuronal pathways, in an unsystematic manner. Although spectacular advances have been made in neuroscientists’ ability to examine and measure the output of individual neurons in the brains of living animals, such studies have shed little light on how the brain as a whole is wired together. In much the same way that the study of the genome has shifted to emphasize networks of interacting genes, neuroscientists are beginning to understand the importance of circuit-level properties in the normal and dysfunctional brain.

This, says Mitra, is notable in part because “the defining architectural feature of the nervous system is precisely that it forms a circuit.” One critical question, therefore, is at what level of resolution to attempt a whole-brain circuit diagram. Mitra and co-authors are proposing to map the circuit in the mouse brain at what they call a “mesoscopic scale.”  Somewhere between the micro- and macroscopic, this intermediate level corresponds with the basic architectural organization of the mouse brain, in terms of its observed cellular, chemical, and genetic makeup. Most importantly, the authors expect this to be the level at which the pattern of connections in individual animals will have a significant degree of commonality, ultimately providing a meaningful and tractable description of the brain’s structure.

Tracing the inputs and outputs of each area

Brain organization at the macroscopic level—the level of entire structural-functional systems and major nerve-fiber bundles—is somewhat understood, but provides an insufficient level of description of the overall wiring diagram. Some scientists have argued that it would be best to map mouse brain structure at the micro-level of individual synapses—the myriad gaps across which individual neurons communicate, with the help of neurotransmitters and modulators such as glutamate, GABA, acetylcholine, dopamine and serotonin. But this isn’t technologically feasible to do on a brain-wide scale for a mouse, let alone larger vertebrate brains. Data storage at such a scale, which would involve storing nanometer-resolution images made with electron microscopes, could cost as much as one billion dollars, Mitra says.

In contrast, the proposed project is “both technologically and economically practical, involving techniques that are well proven,” according to Mitra. All measurements will be made in standard lab mice of precisely the same developmental age—56 days, as in the Allen Brain Atlas project; each mouse will be injected in one brain area with one or more tracers, which are actively transported within individual nerve cells. These tracers may be “conventional” molecules that have been used by neuroanatomists over the last several decades, or engineered viruses that infect cells at the injection site, marking their extent through the expression of a fluorescent protein. The utility of these techniques is in tracing projection neurons either from axon terminals to potentially distant cell bodies or vice-versa.

Together, the tracers will provide a view of the pattern of inputs and outputs for a given site in the brain. These patterns will be mapped from images of thinly sectioned brain slices obtained using light microscopy, taking advantage of recently available technologies to rapidly and automatically scan and digitize a set of slides.

Extracting and combining the results across individual mice will be a computational challenge that requires automating many of the steps that neuroanatomists now perform by hand. Bohland is aware of these challenges. “Solving these problems, in general, is difficult because the circumstances of individual experiments can be wildly different,” he acknowledges, “But in the systematic, standardized protocols we call for, finding solutions becomes considerably easier.”

The full dataset will comprise hundreds of terabytes—a very modest data-storage burden, according to Mitra. “That will give us about twofold coverage of the entire brain circuit in a first draft, and could be accomplished in two or three years, with cooperation from the neuroscience community. At more robust funding levels, we could attempt 10-fold coverage over, perhaps, a five-year period.” In the spirit of genome projects, all data from the proposed program would be made rapidly available over the web to the entire research community.

While the immediate focus now is to bring a mouse connectivity project to fruition, the authors also make the case for cataloging and digitizing results from existing studies in other species, and for filling key gaps with targeted studies. Moreover, there is an important need, they argue, for further development and validation of experimental techniques that can be used directly in the human brain.

Comparing circuits in healthy brain vs. the brain in autism or schizophrenia

Perhaps the most exciting aspect of such a brain mapping project is its likelihood to deepen our understanding of what goes awry at the circuit level in neuropsychiatric illnesses. At present, scientists are lacking data of this type with which to work on theories of disease causation and mechanism. “In recent years,” Mitra observes, “many scientists have made mouse models of various complex disorders, such as schizophrenia or autism. But so far no one has been able to pinpoint what goes wrong in brain circuitry when you have one of these devastating illnesses.

“It has been hypothesized, at least for neurodevelopmental disorders, that the circuit is altered during the developmental process, in some manner fundamentally changing the circuit. Once we have succeeded in fully mapping the brain in the healthy mouse, we will be able to measure, objectively, how the whole-brain circuit differs in mice that model various aspects of behaviors or known genetic alterations associated with human illnesses like autism or schizophrenia.

“I think this would be a crucial missing piece in any effort to understand comparatively, not at the level of observed behavior, or at the level of the genome, but at the level of the brain circuit, how healthy individuals differ from those with illness,” Mitra says. “With a circuit map we will be able to hypothesize disease-circuit phenotypes for neurodevelopmental illnesses, which, in turn, should lead to new understanding of disease causation and mechanism, and to the development of new therapeutic approaches.

“Our first challenge, however, is to engage our neuroscience colleagues and enlist them in the project to get a first draft of the healthy mouse brain. That’s the necessary first step before we can begin looking at brain circuits in disease and making comparisons.”